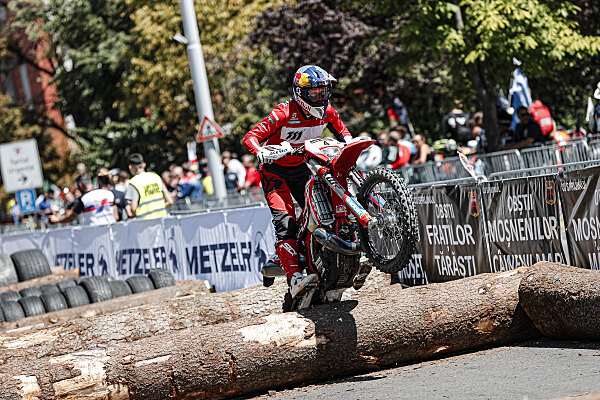 Round five of the FIM Hard Enduro World Championship, the iconic Red Bull Romaniacs, marked the exciting return of GASGAS Factory Racing’s Taddy Blazusiak who kicked things off in style with a close runner-up finish in the prologue. The enduro legend then began the world’s toughest hard enduro rallye with strong and consistent results on the opening two days before his ongoing wrist injury forced him to withdraw from the event on day three. Flying the GASGAS flag high in Romania and in contention for an overall podium result was Michael Walkner who would ultimately secure an impressive fifth-place finish.

Making his highly anticipated return to racing, GASGAS Factory Racing’s Taddy Blazusiak was back in action at Red Bull Romaniacs. Absent in the FIM Hard Enduro World Championship to date due to a wrist injury, Taddy was eager to get back in the mix again.

With Red Bull Romaniacs world renowned as the toughest hard enduro rallye for good reason, the EC 300 mounted rider knew the event would be a tough challenge, but he was keen to race. And with the infamous city prologue right up his street, he came out swinging on Tuesday.

Instantly gelling with the oversized endurocross course, Taddy raced hard. Getting into the race lead he looked set to win his first race back, until heavy traffic in the final lap tripped him up. Eventually finishing second to fellow GASGAS mounted competitor Alfredo Gomez, he was still excited to be back banging bars.

Heading out into the mountains, Taddy took each day as they came. However, after multiple seven-hour days in the saddle he decided to withdraw on Offroad Day 3, avoiding any further injury to his wrist.

Quietly going about his business and letting his results do the talking, Michael Walkner was in fine form throughout round five of the FIM Hard Enduro World Championship. Finishing 10th in the prologue, he got his race off to a steady start. But once the race headed into the mountains the young Austrian was more at home in his favored terrain on his EC 300 and ended Offroad Day 1 in a promising fourth place.

Throughout Offroad Day 2, Michael once again battled up front. In what was the longest day of the event at over six hours long, he clocked the fifth-fastest time! Offroad Day 3 saw Walkner deliver arguably his best day performance at Red Bull Romaniacs to place fourth. Moving up to fourth overall in the provisional classification ensured the final Offroad Day 4 would be a decisive one.

And that’s when things went a little sideways! With an overall podium result up for grabs, the 24-year-old gave it everything he had, but unfortunately injured his foot. Knowing the checkered flag wasn’t far away, he focused on finishing and did so with a strong sixth place. Dropping to fifth overall was unfortunate but nevertheless, it was another impressive showing for the rising star who’s currently enjoying a breakout season in the FIM Hard Enduro World Championship.

The FIM Hard Enduro World Championship continues with a trip stateside for round six and Red Bull TKO which takes place in Sequatchie, Tennessee on August 11-14.

Taddy Blazusiak:“It was frustrating to retire on the penultimate day, but sometimes you have to make the right call even if you don’t want too. My wrist just isn’t 100 per cent yet and once we got into the mountains it was painful to hold on. I dug deep for those three days, but unfortunately I couldn’t go any further. It’s been nice to be back on track again though. Fighting for the prologue win was exciting – I missed that feeling. On that endurocross style of riding, I’ve shown I’m fast and I can take a lot away from that too.”

Michael Walkner:“It’s been a big week at Red Bull Romaniacs, but one of my best yet. I felt good all week and I feel like I’ve been able to step things up again in my riding. I was fighting hard all the way, never too far from the podium. After yesterday’s strong ride I was pushing as hard as I could today and unfortunately paid the price a little. I think I might have broken my foot as it’s hurting a lot! But I was able to ride on and knew the finish line wasn’t too far away, so I didn’t stop. Overall, I’m proud of my result, fifth overall is my best ever finish at Romaniacs.”