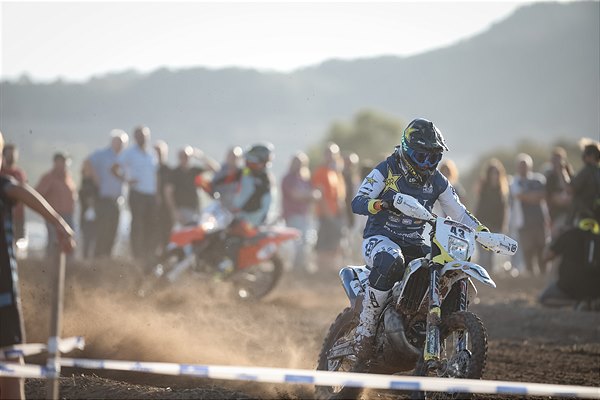 Eagerly awaiting his second home race of the 2019 WESS season, Rockstar Energy Husqvarna Factory Racing’s Alfredo Gomez looked to deliver his best despite not favouring the Classic Enduro format of BR2 Enduro Solsona. With an initial goal of placing inside the top-15 among a highly-stacked field of Spanish time card enduro specialists, he began his weekend in determined fashion.

Ending day one in 15th position, the Husqvarna rider was on target to secure his goal despite a couple of mistakes in the high-speed cross test. However, knowing that if he could eliminate his errors, then the possibility of climbing the leaderboard on Sunday was high.

Focused on doing exactly that, the Spaniard – spurred on by home support – improved his position with each lap to move within striking distance of the top-10, eventually finishing 12th.

For Graham Jarvis the weekend didn’t go to plan. Developing a stomach bug during Friday night, he started feeling unwell on Saturday morning. But determined to try and protect his top-three position in the championship he took his place on the start line.

However, with his condition worsening in the hot and dusty conditions, he was forced to stop at the end of lap one, taking no further participation in the two-day event.

The World Enduro Super Series concludes with the eighth and final round at Germany’s GetzenRodeo on Saturday November 2.

Alfredo Gomez:“Overall I’m really happy with how the weekend has gone. Yesterday wasn’t so good but I was able to find a good rhythm to finish 10th today and secure 12th overall for the event, which I’m really pleased about. I made a mistake yesterday and had a small crash and then today I missed my line in a test which cost me some more time. Coming from a Hard Enduro background I found myself losing out to some of the other riders on the faster tests, so I need to work on that. However, I was very strong on the extreme test. I’m looking forward to GetzenRodeo now. I had a really good battle there last year, so I want to finish the season with a win.”

Andi Hölzl – Rockstar Energy Husqvarna Factory Racing Team Manager:“Unfortunately Graham felt ill when he woke up on Saturday morning. He was lacking in energy and feeling nauseous but decided to ride to try and protect his position of top-three in the championship. However, it was clear at the end of the opening lap that stopping was the best decision. Now, with some rest and recuperation the goal is to arrive to the final round at GetzenRodeo fully fit and aim for a winning result.”