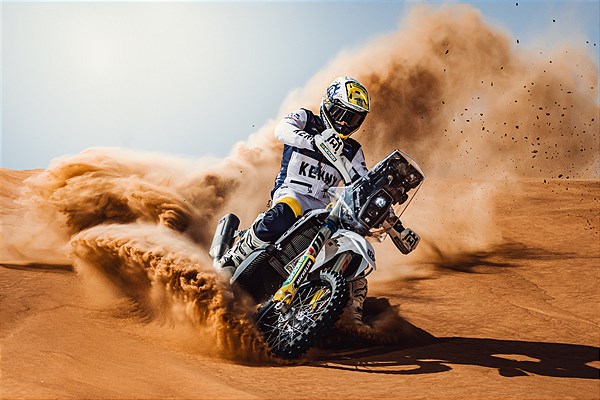 Husqvarna Factory Racing’s Luciano Benavides and Skyler Howes will return to competition this coming weekend when they reunite with their FR 450 Rally machines and take to the start of the 2022 Abu Dhabi Desert Challenge, round two of the FIM Rally-Raid World Championship.

Marking the re-start of the rally season following the Dakar Rally in January, the six-day ADDC will kick off on Saturday with a short prologue in and around the Yas Marina motorsport circuit before the first of five full days of racing begins on Sunday. Although each day of competition will be relatively short, sand will feature predominantly throughout the event, ensuring a challenging week of racing for both Luciano and Skyler.

For Luciano, round two of the Rally Raid World Championship offers the first opportunity for the Argentinian to challenge for a world championship win since the Dakar. Despite not claiming the result he hoped for back in January following his frustrating navigational issues during the opening stage, Luciano is fit, confident, and looking to be fast and consistent throughout the ADDC.

Not setting his sights too high, Skyler Howes also returns to rally competition for the first time since the Dakar Rally, where he unfortunately suffered an early exit from the event following a crash on stage five. Excited to be competing in Abu Dhabi for the very first time, despite having been back on a bike for a number of weeks and training well at home in the States, Skyler will use the opening stages of the ADDC event to build himself back up ahead of a busy season of rally raid competition.

Luciano Benavides:“I’m really looking forward to racing in Abu Dhabi, our second race of the year. It’s not been so long since we were racing at Dakar so it’s great to be back on the bike, and with the team. Of course, I’m hoping for a good prologue and then a good race. My goal is to be fast and consistent from the start, and to avoid the mistake I made on the first day at Dakar. I’m expecting a race with 90 percent sand dunes, so it’s a terrain I really like. I finished second here in 2019, which is one of my best results. I really enjoy racing here, so I look forward to a good rally.”

Skyler Howes:“I’m excited to be here in Abu Dhabi, which is my first time competing in this race, but I’m not quite 100% following my crash at Dakar. Because of that my approach is a little different to all other rallies. I’m focused on doing the best I can, but not on winning. I’m confident I can do good, but for me, this rally is all about building myself back up, working on the bike some more, and generally setting myself up well for the rest of the season. I’ve been riding plenty at home in the US, and I’ve been feeling good there, but I just want to take a few days to get back into the swing of racing. Also, being my first time racing here there’ll be lots for me to experience and learn, which I’m looking forward to.”