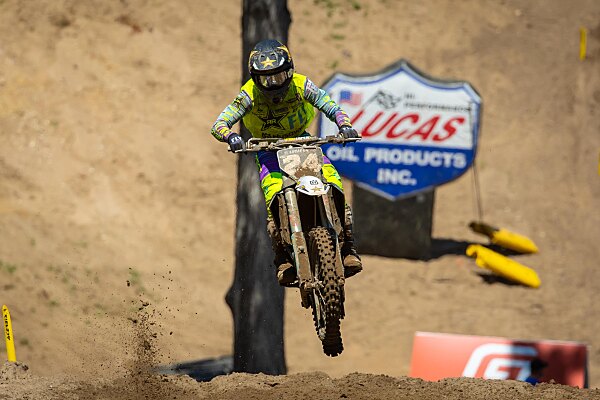 ANOTHER TOP-FIVE FINISH FOR HAMPSHIRE AT BRUTALLY TOUGH SOUTHWICK NATIONAL.

With a solid gate pick after qualifying eighth, Hampshire powered his FC 250 into fourth out of the gate for Moto 1. Within a few laps, he overtook his competition to move into a podium spot early on. Halfway into the moto, Hampshire collided with another rider on a jump, costing him a podium spot, and he re-mounted with more determination than ever. Fighting his way back into podium contention, Hampshire battled down to the wire with an impressive fourth-place ride.

In Moto 2, he found himself just outside the top-10 off the start. Putting his head down and charging through the pack, Hampshire reached the top-five battle just after the midway point. Hungry for the podium, he continued to push through the final stretch to capture another valiant top-five finish in the second moto.

“We made it through another pretty solid day,”Hampshire said. “The first moto, I had good speed and a lapper stalled in front of me and I jumped right into him and lost that podium. Second moto, I didn’t have a good start at all. All-in-all, we had some progress and a bit of positives today. We’re working hard and the team is working hard also, we’ve had something special here for these last five or six rounds. We’ll take this week to get healthy again and come out swinging for Millville.”

Coming off his career-best finish at the prior round, consistency was the name of Robertson’s game at Southwick. With a seventh-place start in the first moto, he settled into the spot early on before moving up to sixth midway through. He then became engaged in a battle to maintain sixth, dicing back-and-forth several times before ultimately securing seventh.

With a fourth-place start in Moto 2, he began the chase for the lead riders early on. It wasn’t until lap five that pressure began to mount and Robertson got shuffled back to sixth. He continued to fight just outside the top-five battle, ultimately scoring another seventh-place finish in the second moto. With 7-7 moto scores, Robert was able to secure sixth overall.

“Qualifying was a little rough, I couldn’t find my flow and with Southwick, you have to get it soon and fast, which kind of stressed me out,” Robertson said. “First moto, I was just kind of  flat – not really energywise, but riding-wise, I had nothing in me. Second moto, I was good at the beginning and then just got smoked. My body went away and I was trying my best.”

Teammate Jalek Swoll put together two solid motos to come away with a top-10 overall finish in the 250MX class. He placed his FC 250 into the top-five at the start of Moto 1 and he shuffled back a few spots to eighth. Nearing the end of the race, he lost a few more positions to finish 12th. With another top-five start in Moto 2, Swoll found himself shuffled back to ninth on the opening lap. He battled inside the top-10 for the remainder of the race, securing a top-10 finish in the second moto.

“It was a tough track today but it was good,”Swoll said. “I’m happy to get through two motos again, that’s something we can keep building off of and finally start to find some sort of rhythm this year. I think my speed is good, I just have to get that intensity back. The guys are going really fast right now and they have a lot of motos under their belts. I’m just playing catch-up right now but I’ll start to find the flow and start clicking off some good days.”

Qualifying 11th in the 450MX class, fill-in rider Shane McElrath put in a respectable performance in both motos despite encountering incredibly rough track conditions. In Moto 1, he got off to a 12th-place start and fought hard to make moves early on. Unable to make passes, McElrath ultimately finished 11th in the first race. In Moto 2, he was 15th off the line but quickly found himself buried in the pack. Battling challenging conditions in the sandy terrain, he reclaimed a few spots late in the race to finish 15th in the moto and 13th overall on the day.

“My day started out a lot better,” McElrath said. “I had my best qualifying sessions, as far as getting a good feel of the track and putting some good laps in. The track was honestly really, really rough for our second practice and it just continued to get worse. I definitely struggled and fought against the track all day, it was a little bit disappointing. I’ve got some stuff to figure out and I’m gonna keep working. That’s really all I can do.”