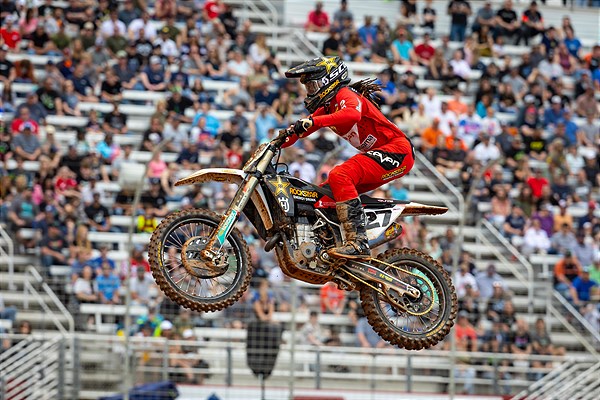 Rockstar Energy Husqvarna Factory Racing’s Malcolm Stewart battled through the elements at Saturday’s Atlanta SX, where he captured a solid top-five finish amidst a hectic day of racing in the 450SX class. Only four points outside of third overall in the point standings, Stewart continues to solidify his presence in the premier class as he fights for his first win in 2022. Teammate RJ Hampshire managed a tough day in Atlanta, securing a top-10 finish in the stacked 250SX East/West Showdown and climbing up a notch to second overall in the Eastern Regional standings.

Early morning rainfall created a muddled start to the day with one condensed practice and qualifying session for each class and super slick conditions as the gates dropped for the daytime schedule. In the 450SX division, Stewart put in a fast lap good enough for fifth overall and he settled into a top-five start in the heat. Climbing into third halfway through, he held a steady pace through the finish to secure third in the heat.

In the Main Event, Stewart got off to a sixth-place start and he positioned himself inside the top-five battle early on. The slick track conditions lent themselves to riders shuffling around all over the top spots but Stewart kept himself steady and in the mix all race long to secure his eighth top-five finish of the season at Round 14.

“The day was actually pretty good, even though it was a short day,”Stewart said. “I feel like I rode pretty good in the main. I had a decent start and I kind of just made some things happen and we ended up fifth. I do feel like there was a lot more left in the tank but honestly, I’m happy to re-bound myself after the crash last weekend. I know it’s just a top-five but it’s something to build off of and I’m stoked to just be back racing again and we’ll be ready for next weekend.”

In the 250SX class, the East/West Showdown brought together the top riders from each regional division, giving teammates RJ Hampshire and Jalek Swoll the opportunity to line up together in the combined Main Event. Hampshire, last weekend’s 250SX East winner, shot off the line in his heat but he lost footing coming into the first turn and rode off-track for a moment, returning in third. Racing in second for the majority of laps, Hampshire made a late-race charge to overtake the lead with one lap to go but he lost it on the final lap, ultimately finishing third after being docked one-position for a race infraction on lap one.

In the Main Event, Hampshire got off to a great start up front but he went down in the slick conditions on the opening lap. Re-mounting in fifth, he kept himself in the top-five battle for the first few laps before shuffling back a few spots midway through the race. From there, Hampshire made the decision to ride a comfortable pace for the remaining laps, ultimately securing a solid eighth in the combined E/W Showdown.

“This was my first time racing Atlanta and it was a tough day to try and get comfortable with only one practice,” Hampshire said.“My starts are still pretty solid but I just wasn’t comfortable in that Main Event. It got pretty hairy as the race went on and I just kind of went big-picture and backed it down, so I can live to fight another weekend. Hopefully we’ll be back on the podium in Boston, if not the top step.”

Swoll, the team’s 250SX West rider, managed his day to come away with an 11th place finish in the Main Event. Battling through the rough conditions, he secured an eighth-place finish in the heat race, giving him an immediate transfer onto the East/West Showdown starting line. In the main, Swoll got a 12th-place start and he raced just outside the top-10 all day.

“It wasn’t the best day for me but we got some better starts,” Swoll said. “I just need a little bit better riding and we’ll fix the issues. All good, just looking forward to the next round and we’ll try to end off supercross with some good results.”

Next Round: April 23 – Foxborough, Massachusetts