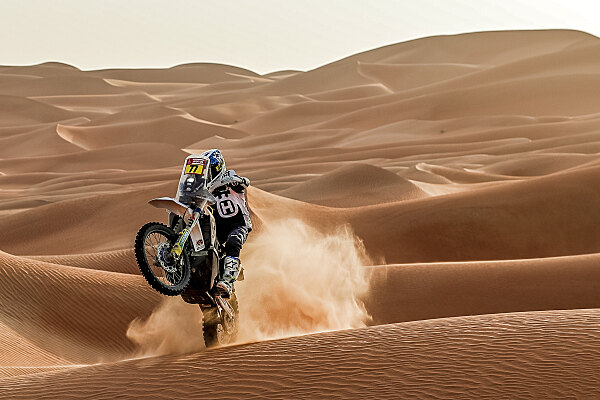 It was another tough day in the desert for all riders as they completed the 13th stage of this epic 45th running of the Dakar Rally. As the event left the dunes of the Empty Quarter and headed to Al Hofuf, competitors raced 154 kilometres against the clock, which were followed by a long liaison to reach the bivouac.

Luciano Benavides, pushing hard right from the start of the special, was immediately in contention to take his fourth stage win at this year’s Dakar. Initially fastest across the finish line, a one-minute penalty dropped the number 77 to second, which was then corrected to third place after Luciano’s brother Kevin was rewarded time lost for assisting a fallen rider.

Although slightly disappointed not to have taken another stage win, Luciano was more than happy with the way he has ridden the featureless Empty Quarter region and is now looking to finish his race on a high with another strong ride on tomorrow’s final stage 14.

Still well in the hunt for overall victory at this year’s Dakar, Skyler Howes was the sixth rider through the gate this morning and maintained a strong pace to the finish, despite a couple of errors along the way. The American has dropped down to third overall in the provisional overall standings, but he trails the leader by just one minute and 31 seconds and will have one final opportunity to make up time on his rivals on the rally’s 14th stage tomorrow.

Luciano Benavides:“The stage was good – around 150 kilometres of dunes. I had a small crash near the beginning, possibly from pushing a little too hard. But after that, I found my rhythm and was able to push again. Midway through the stage I saw Matthias (Walkner) on the ground with the helicopter. Obviously, I hope everything is ok with him and wish him a speedy recovery. After that, I carried on to the finish and think I did a good job. It wasn’t quite enough to win the stage, but I’m happy with how I rode.”

Skyler Howes:“Well, I definitely gave my all today – I pushed right from the start as hard as I could. When I saw that Walkner had crashed, it affected my focus a little bit. There were some really big dunes today, I had big jumps off the top of them myself, too. That was a bit of a deciding factor, I really wanted to push and try and get the win, but I want to make sure that I can complete the race as well. I missed one waypoint later on, and that meant circling around to pick it up, so I lost a little bit of time there. I’m still in the fight for the win, and I have to be super happy with how this race as gone up to this point. I can never look back and say I didn’t try my best. I’m looking forward to tomorrow, it’s going to be a short but fast stage with little scope to make up time I think, so the goal is to get my Husqvarna to the finish line in one piece and hopefully in a good position.”