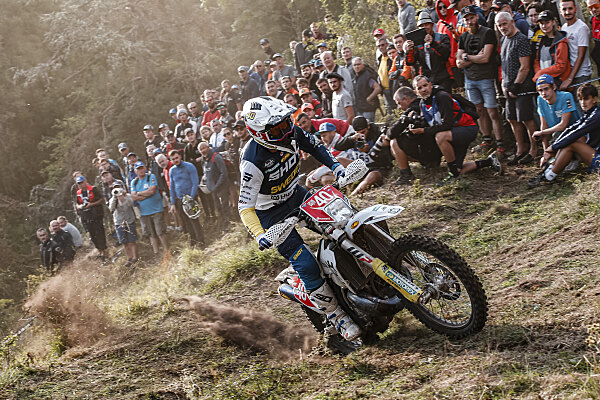 Husqvarna Factory Racing’s Mikael Persson has won the Enduro3 class at the 2022 FIM International Six Days Enduro. Riding his TE 300 at the historic event, the Swede topped his class on each day of competition in France before placing a solid fourth on the final motocross race.

Following his breakthrough ride at the 2021 ISDE, where he placed third overall, Persson came into this year’s 96th edition with the goal of emulating that success and to carry the same speed that has taken him to the lead of the Enduro3 World Championship.

A strong start on day one saw Persson complete the opening five tests in third overall, opening up a near 20-second advantage at the top of the Enduro3 category. With day two following the same route, Mikael was able to maintain his strong pace across the increasingly rough terrain to complete the day inside the top five overall, further extending his advantage in E3.

Top-six overall results on days three and four helped to increase Mikael’s advantage in the E3 class as he carried a 30-second lead into the final day of special tests. Once again giving his maximum effort on the fresh tests of day five, and despite rain falling at times, the Husqvarna Factory Racing rider was able to maintain his position at the top of his class.

With just Saturday’s motocross test separating him from the top step of the Enduro3 podium, Persson delivered a solid but safe ride on the final day to finish the event off on a high and secure his class win.

Mikael Persson:“I’m pretty happy with my performance over the week. Obviously, it feels great to take the win in E3, and I think I had good consistent speed in all the tests, in the different types of terrain. I know there is a little work to do to get on terms with the guys right at the front – a couple of seconds here and there can mean a bit of a gap at the end of six days. For me, I know I tried my best throughout the whole race. The top 10 in the results is near enough the same as in EnduroGP, so I’m where I should be you could say, but I know I made a couple of mistakes that cost me some time. On day five especially, I really pushed as hard as I could, and it meant I went into the final motocross test nearly one minute ahead of the others in my class. As we know anything can happen on the way to that final chequered flag, so I stayed safe and got a solid finish. It felt great to be riding for the Swedish World Trophy team again this year. Everyone gave their best and we came away with sixth place in the end, not far behind the USA. My focus now switches back to the world championship and the final round where I hope to fight for the E3 title.”