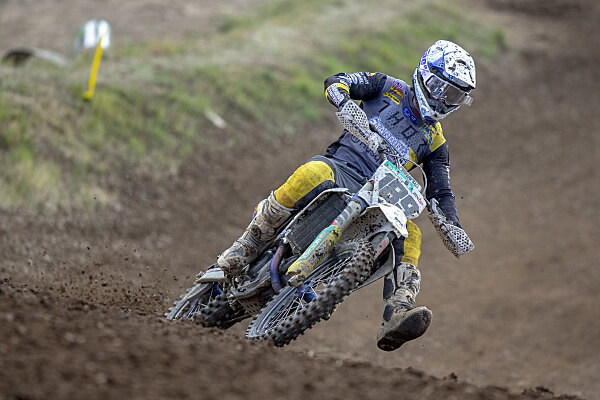 Following a two-week break in the schedule, the Husqvarna Factory Racing stars tackled round thirteen of the 2022 FIM Motocross World Championship. The iconic track of Loket hosted the race, which was dubbed the Grand Prix of Czech Republic, as well as thousands of fans who had travelled from across Europe to see Pauls Jonass, Brian Bogers, Kay de Wolf and Maxime Grau in action.

Standing Construct Husqvarna Factory Racing pilot, Pauls Jonass, continued to show impressive pace on his FC 450, even though a crash threatened to halt his charge in moto one. Jonass was caught in a fall in turn one and faced a mountainous challenge on a fast-paced track, but charged to twelfth and was the quickest man on track at points. Jonass was luckless again in the second stint, as a crash early on forced him to retire prematurely. ’41‘ was still classified in sixteenth overall and is eager to rebound at the next event.

It was a strong showing for Jonass‘ teammate, Brian Bogers, who made steady progress to advance to tenth in the opening stint. Bogers was thirteenth on the opening lap and not too far from the top eight when the chequered flag waved. The second moto followed a similar pattern, as he started on the cusp of the top fifteen and worked his way into eighth at the chequered flag. Bogers‘ fitness was on show as he made some passes late in the moto to eventually secure eighth in the overall classification.

Racing in the MX2 class on his Nestaan Husqvarna Factory Racing steed, Kay de Wolf showed brilliant speed from the moment that the event commenced. Charging to sixth was impressive in the first moto, as he was hindered by a slight bobble on the opening lap that stopped him pushing for a spot inside of the top three. A mediocre start did not help his cause in the last stint, as he had to work his way from the edge of the top ten to seventh at the chequered flag. A consistent 6-7 scorecard put him sixth overall on the day.

Seeing as EMX250 did not feature on the Grand Prix of Czech Republic schedule, Maxime Grau stepped up and made his debut in the MX2 class. Grau made the most of such an exciting opportunity and showed top-ten speed at different points. Fifteenth was the position that he claimed in the opening moto and he backed that up by taking sixteenth in moto two, which put him in the same position in the overall classification. EMX250 duty is next on the agenda for the promising Frenchman.

Another challenge awaits now, as the fourteenth event of the 2022 FIM Motocross World Championship is going to be run this coming weekend. The Grand Prix of Flanders is going to be held in the bottomless sand of Lommel, which is a surface that only the very best prosper in.

Brian Bogers: „I’m not sure that anyone noticed me today, but the result was decent today. If you look at where I came from, after some bad starts, then I think that I did a good job. Especially on this track too! I am happy with the progress that we are making as a team and excited to see what the next race begins.“

Kay de Wolf: „There were a lot of positives to take from today. The first moto was quite good, as I did not have the best start and hit the back wheel of someone else. That cost me four places! I had to fight my way back and did that well. I felt really good on this track. The second moto was tougher, but I am happy with today.“

Maxime Grau: „It was a good weekend. It was just amazing to ride in the MX2 class! I finished fifteenth in the first moto, after making some mistakes. The start was not very good in the second moto, but I made some passes. I stalled the bike at one point and had to settle for sixteenth. Thanks to the team for this opportunity.„