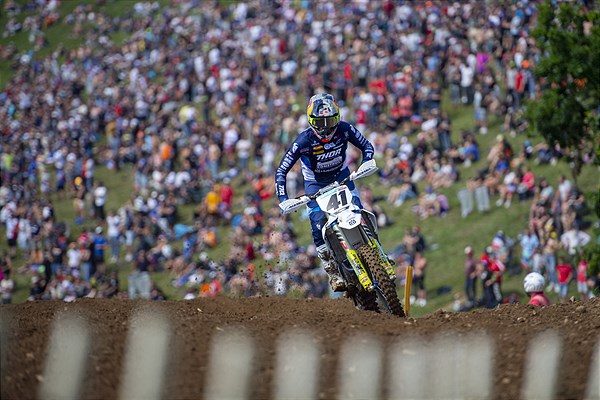 PAULS JONASS CHARGES HARD FOR TENTH OVERALL AT ROUND TEN OF 2022 MXGP.

Intense rainfall made round ten of the 2022 FIM Motocross World Championship, the Grand Prix of France, a spectacle, as the slick hillside of Ernee became quite tricky. Pauls Jonass was the sole star underneath the Standing Construct Husqvarna Factory Racing tent and salvaged a solid haul of points at the Grand Prix, as he placed his FC 450 in tenth overall.

Pauls Jonass was luckless in the first premier-class moto – he was tangled up in a fall in turn one and jumped back onto his FC 450 in dead last. Such a significant deficit didn’t deter him though, as he put his head down and sliced past as many stars as possible. Eleventh was his eventual ranking in the first moto, thanks to that very impressive charge.

The second moto was a little kinder to Jonass, although a mediocre start left him with even more work to do. A chaotic first lap meant that ’41‘ started in twelfth, yet he managed to climb up to seventh by the time that the moto concluded. 11-7 scores left him in tenth overall at the Grand Prix and helped him edge closer to the riders ahead of him in the championship standings.

Brian Bogers, who raced to a terrific podium finish just last week, opted out of the Grand Prix of France, as he was struggling with an illness that was picked up in the days prior to the race. Bogers expects to be back on his FC 450 at the next event.

The Grand Prix of Germany is the next appointment for the Husqvarna pilots – Teutschenthal will host that event on June 11/12. The fixture will mark round eleven of the 2022 FIM Motocross World Championship.

Pauls Jonass: „I think that this is the best that I have ridden this year. I felt so much better from Saturday morning; I felt like I could push as much as I needed to. I could really enjoy it this weekend. I rode really, really well in the first moto and made some good passes.“