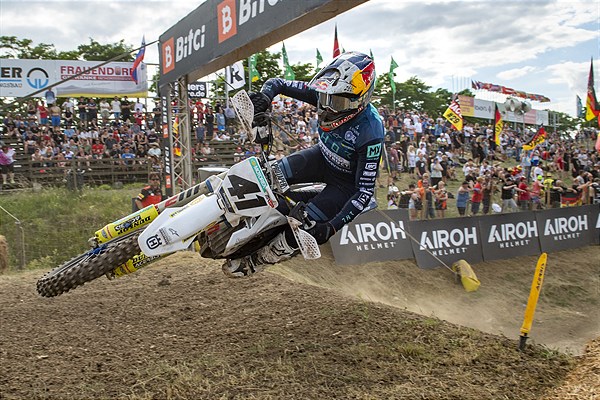 JONASS RACES TO SECOND IN MOTO ONE AT 2022 MXGP OF GERMANY.

Thousands of passionate fans charged into the Grand Prix of Germany, the eleventh round of the 2022 FIM Motocross World Championship, earlier today. The historic circuit of Teutschenthal played host to the race, which was a positive affair for the Husqvarna Factory Racing riders. The Standing Construct Husqvarna duo, Pauls Jonass and Brian Bogers, made progress after a difficult event in France and Kay de Wolf returned to racing for the Nestaan Husqvarna Factory Racing effort.

Using the power within his FC 450, Jonass rocketed out of turn one in second in the first premier-class stint. ’41‘ was poised in the laps that followed; he held that runner-up spot to the chequered flag and trailed the eventual victor by just five seconds. Unfortunately, a great start to moto two was destroyed by a fall on lap one. Proving just how comfortable he is aboard his steed, he charged from the back of the pack to thirteenth on a track that most struggled to pass on. Jonass was classified in sixth overall via 2-13 moto scores.

For Jonass‘ teammate beneath the Standing Construct Husqvarna Factory Racing tent, Brian Bogers, round eleven provided an opportunity to get back on track after missing the last event in France. Barely recovered from the illness that sidelined him, Bogers was classified in eighteenth overall via 17-16 moto scores. Seventh is where he currently sits in the championship standings.

Kay de Wolf returned to the MX2 division, after missing the last three stops with a fractured metacarpal in his hand, and strived to establish a base that he could build off of in the coming weeks. Although a crash in turn one threatened to ruin his first moto, he did well to charge back to eleventh at the chequered flag. De Wolf followed that up with another eleventh in moto two, despite a crash, and claimed a good haul of points in his return to racing. ’74‘ was classified in eleventh in the overall classification as well.

Keeping an eye on the future, Maxime Grau made a welcome return to EMX250 competition with Nestaan Husqvarna Factory Racing and placed his FC 250 on the podium for the first time. Grau sprinted to 3-2 moto scores, despite a crash early in the first moto, and climbed onto the overall podium in second overall.

A long-haul flight awaits the Husqvarna Factory Racing riders now. The next stop of the 2022 FIM Motocross World Championship, round twelve, will be run in Indonesia on June 25/26.

Pauls Jonass: „I am disappointed to miss the podium, of course. Getting on the podium is always the goal! I felt so good on my FC 450 all weekend. Even in the second moto, when I was coming through the field, my speed was really good. I am confident though. The speed is there, as is the feeling on the bike, and the team is working so hard.“

Brian Bogers: „My illness is over now, but I can just feel it in my fitness. It is good that I finished both motos and this weekend was just about survival for me. This is not what we want, of course, because things were going so well. I just had to be patient with it and now I’ll keep building with the team to get back to full fitness.“

Kay de Wolf: „I crashed in the first turn in moto one; I was dead last and came back to eleventh. You do a lot of physical training when you are injured, but there is nothing that compares to riding a bike. I had an okay start in the second moto and passed some people. I hit a stone in a turn, tucked the front wheel and went back to eleventh. I just did my own thing in the last ten minutes.“