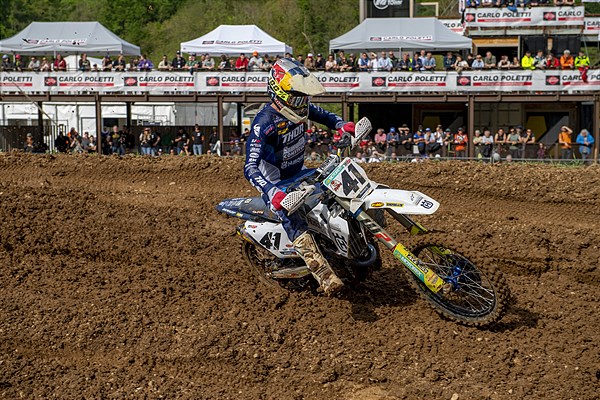 PAULS JONASS PUTS FC 450 AT THE FRONT OF PACK EARLY IN MOTO TWO.

The Husqvarna Factory Racing stars tackled treacherous conditions in Maggiora, Italy, today, as the seventh round of the 2022 FIM Motocross World Championship was run underneath rain clouds. The Grand Prix of Italy, as the race was officially dubbed, was run in front of 22,000 fans, despite the unpleasant weather forecast.

Pauls Jonass of Standing Construct Husqvarna Factory Racing was rather consistent aboard his FC 450. Such patience was awarded in moto one – he was classified in fifth after starting in fourth. Jonass enjoyed a brief spell at the front of the pack in moto two and was set to finish on the overall podium, but some mistakes caused him to fall to eighth. 5-8 scores put him in seventh overall at the Grand Prix.

Brian Bogers salvaged some solid points at the Grand Prix of Italy, despite some mediocre starts on a circuit that made the first few inches so crucial. Floating on the cusp of the top fifteen early in moto one, he found his way into ninth by the time that the chequered flag was waved. Bogers faced a greater challenge in moto two; he fell early on and had to fight from the very back to get fourteenth. A 9-14 scorecard resulted in him being ranked in twelfth overall.

For Kay de Wolf, mistakes proved to be costly on the deceiving surface. ’74‘ was placed as high as fourth in the first moto, but a handful of small errors in the second half of the moto meant that he hit the chequered flag in ninth place. The second moto was a much better showing for him, despite some more mistakes, as he charged from seventh to fourth. De Wolf was classified in fifth overall at the Grand Prix and now runs in fourth in the championship standings.

The Grand Prix of Sardegna is next on the agenda for those Husqvarna Factory Racing pilots. Riola Sardo, a circuit that Kay de Wolf enjoyed podium success at just last term, awaits. The eighth round of the 2022 FIM Motocross World Championship will be run on May 15.

Pauls Jonass: „If I did not crash twice in the second moto then it would have been a good day! I was riding comfortably in third in that second moto and just made a mistake. It is just a pity. I was trying very hard to get back to fourth, which is why I made another mistake on the last lap. If you remove those mistakes though then it would have been an okay weekend, overall. I am determined to get back to where I should be.“

Brian Bogers: “Today was not good for me. There were too many mistakes, but some of them were not even my fault! A rider made a mistake in front of me in that second moto and that caused me to crash. I just did not have great starts this weekend and that made it difficult on me. Everyone was using the same lines and riding in a train out there, which made it tricky to pass. It was difficult. I am not happy, but very focussed on the next race. I am looking forward to bouncing back there!”

Kay de Wolf: “It was a difficult day. It was really muddy in the morning! I did not have a very good start in the first moto and was lucky that a few people crashed. I was in third or fourth, but I made a small mistake. I had to fight back and then I crashed two more times. We learnt from that, so the second moto was a lot better. I still had a small crash in that moto, unfortunately, but I fought back to fourth. I was pretty happy with that. It was a big learning day.“