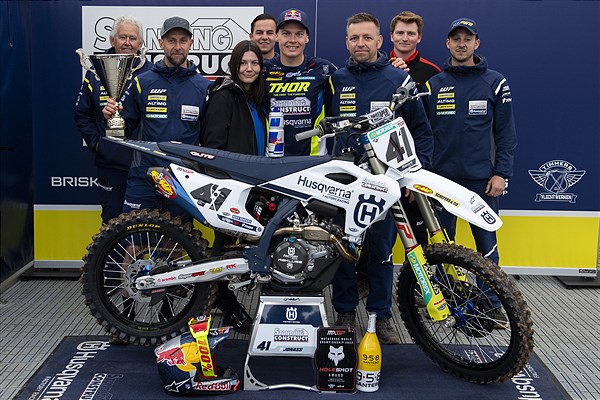 PAULS JONASS SECURES SECOND OVERALL AT THE MXGP OF LATVIA.

Pauls Jonass of Standing Construct Husqvarna Factory Racing grabbed the limelight at the sixth stop of the 2022 FIM Motocross World Championship, the Grand Prix of Latvia, as he raced to 2-2 scores and leapt up onto the overall podium in his homeland. Jonass thrived in the tough conditions to put his FC 450 in the runner-up position.

Starting in third in moto one, Jonass advanced into second on the opening lap and placed his focus on the leader. ’41‘ shadowed the leader throughout the race and was never more than a couple of seconds behind. After slipping into third momentarily, he claimed a season-best ranking of second at the chequered flag. It was the start of a great day for Jonass, as he raced to the holeshot in moto two and led for six laps before crossing the finish line in second again. Unsurprisingly, a 2-2 scorecard helped Jonass secure second on the overall podium and climb to tenth in the championship standings.

Brian Bogers was impressive in the tricky conditions, despite a poor start in the first moto that put him just outside of the top ten. Not to be deterred, he made some impressive progress to slide into eighth place at the very end. Bogers backed that up with a strong showing in moto two – he was as high as third before a crash pushed him back to sixth at the chequered flag. An 8-6 scorecard left him in seventh overall at the conclusion of the Grand Prix; he is now seventh in the championship standings.

Kay de Wolf endured a difficult weekend, where he overcame adversity to salvage a good haul of points in the gruelling conditions. Twelfth was an admirable effort in the first moto – a crash forced him to make more passes than anyone else to secure that position. A much stronger start in moto two helped de Wolf end his weekend on a high, as he advanced from fourth to take second at the end. A 12-2 scorecard left him in fourth overall at the Grand Prix and helped him climb to third in the championship standings.

For the Nestaan Husqvarna Factory Racing squad’s fill-in rider, Jeremy Sydow, the Grand Prix of Latvia was a valuable learning experience and allowed him to show his potential aboard the FC 250. Impressive timed sessions and a top five in the qualifying heat gave him some momentum entering the motos. Unfortunately, a fall in the mud meant that he could not take points in moto one. Sydow rebounded for thirteenth in moto two and eighteenth in the overall classification.

The 2022 FIM Motocross World Championship will return to Italy for the seventh round on May 07/08. The historic circuit of Maggiora, placed on a quaint hillside, will host the Grand Prix.

Pauls Jonass: “Today was almost like a dream come true. I just tried to stay calm, but it was not easy with all of the emotions and fans screaming. I got my first holeshot in a while too! We have put a lot of work in over the last week – everyone on the team had some late nights. I have to say a massive thank you to them for their effort. I am just super happy. I felt so good on the bike.”

Brian Bogers: “I am a little bit disappointed – I feel like I had the speed to be in the top five in both motos. I was in a good position in the second moto, third, and my riding felt really good, so I thought that I would be able to hold on. I crashed and dropped to sixth though. I felt really good on the bike again – I am happy with that and my riding. I believe that I belong in the top five.”

Kay de Wolf: „It was a difficult day, but I turned it around in the second moto. I felt good on the bike all day! It was a difficult first moto, after my crash, but I still got twelfth. I was all-in for the second moto and had a good start. I was fourth early on and managed to take second after a nice battle on the last lap. It was good to end the day on a positive note like that!”

Jeremy Sydow: “I expected more today, as I was feeling very good yesterday. I was riding in eighth in the first race, but made a little mistake and crashed. I had another big crash – I was just completely at the back. I did not have the best start in the second moto, but found a good rhythm and I was happy with my riding. The speed was good in that one, so we will take the positives into the weekend off.”