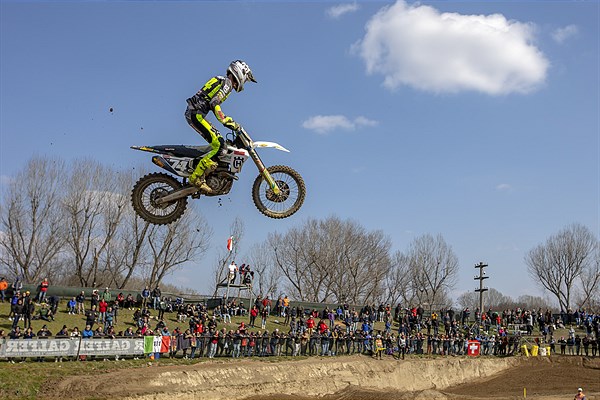 KAY DE WOLF RACES TO HIS FIRST PODIUM FINISH OF 2022 AT MXGP OF LOMBARDIA.

Kay de Wolf has raced to a sensational podium finish aboard his Nestaan Husqvarna Factory Racing FC 250 at the second stop of the 2022 FIM Motocross World Championship. De Wolf raced to 3-4 finishes on the Mantova circuit, which hosted the Grand Prix of Lombardia, and continued his strong run of form in the MX2 division. Roan van de Moosdijk, his teammate, had positives to take from his outing on Italian soil too, as did the Standing Construct Husqvarna Factory Racing duo of Brian Bogers and Pauls Jonass.

De Wolf entered the two motos today with the fifth gate pick, a position that he put to good use in the first stint. Completing lap one in fourth, after a strong start, de Wolf charged into third quite quickly and set his sights on the leaders. A race-long charge meant that he was attacking the rider in the runner-up spot in the closing stages, but he ultimately came up just short and settled for third. Six tenths separated him from the rider in second at the chequered flag.

The second moto was extremely eventful for the MX2 sophomore, who engaged in a race-long battle for a podium spot. De Wolf shadowed the race leaders for much of the race, before eventually bursting into second place. A last-lap duel for that position ensued and, unfortunately, de Wolf crashed just three turns from the finish line. Refusing to give up, he climbed onto his FC 250 and salvaged a fourth in the moto to take third overall at the Grand Prix of Lombardia. De Wolf has now advanced to the same position in the championship standings.

For van de Moosdijk, the Grand Prix of Lombardia was an impressive display of both grit and determination. Fighting hard after a heavy impact in the qualifying heat, he battled from tenth to fifth in the first moto of the day and was just two seconds from the rider in fourth at the end. A crash in the first turn of moto two destroyed his chances of another top-five finish, but he charged hard to salvage a fifteenth. Tenth was his final ranking in the overall classification.

Mantova has been kind to Brian Bogers in the past and today was no different – he showed impressive pace and narrowly missed out on a podium finish in the premier division. Bogers ran as high as fourth in moto one, before settling for seventh, and then challenged the top three in the second encounter. Bogers was second early on, before settling into a comfortable third place and holding that to the very end. Fourth was his overall ranking on what was a successful day at the Grand Prix of Lombardia.

Pauls Jonass was excited to make his first appearance on the Standing Construct Husqvarna Factory Racing FC 450, after recovering from a small surgery, and did remarkably well with a lack of seat time. Jonass took an impressive tenth in moto one, before turning his focus to the upcoming rounds of the current campaign.

A weekend off will offer the Husqvarna Factory Racing riders an opportunity to regroup before tackling the Grand Prix of Patagonia-Argentina, run at the sandy track of Neuquén, on March 20. The race will mark the first time that the FIM Motocross World Championship has travelled overseas in more than two years.

Kay de Wolf: „I did not have an easy Saturday at all, but we turned it around today. I had a good first moto and the riding was good in that second moto too, except for the fact that I made some small mistakes. I lost the focus a little bit. I got passed by [Simon] Langenfelder and wanted to pass him back, but we hit each other and I crashed. That dropped me from second overall to third. It was a tough pill to swallow, but I am happy to be on the podium.“

Roan van de Moosdijk: „The weekend actually started well, but then I hit my shoulder pretty hard in the qualifying heat and did not have a great gate pick for the races today. Somehow I started eighth or ninth in the first moto – the first half of that moto was really good. The pain got worse towards the end, but I still finished fifth. I crashed on the start in the second moto and came back to fifteenth. I just tried to salvage some points. I am looking forward to a weekend off before giving it my all in Argentina.“

Brian Bogers: „I was really motivated today! I had a good start in the first moto and moved to fourth, but then I started to struggle a little bit. I finished seventh. I felt a lot better in the second moto and had another good start. I settled into third quite quickly and stayed there for the whole moto. I was really happy with that third. I missed the overall podium by five points, but hopefully we can get on there in the future.“

Pauls Jonass: „The first moto was really quite okay! I struggled to get into a rhythm in the first couple of laps, but still passed some guys and finished in tenth. It was great to be back and I am looking forward to getting back onto the bike again.“