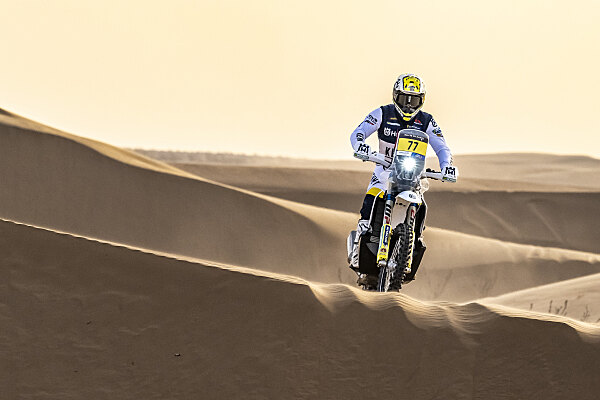 Husqvarna Factory Racing’s Luciano Benavides has won stage three of the 2022 Rallye du Maroc – the third round of the FIM World Rally-Raid Championship. Bringing his FR 450 Rally home just 25 seconds ahead of teammate Skyler Howes, Benavides moves up to second in the provisional overall standings, one place behind Howes who maintains his lead at the top.

Stage three of the Rallye du Maroc was a hugely positive one for the Husqvarna Factory Racing team. Completing the 299-kilometre timed special in just over three hours, Luciano Benavides secured his second career world championship stage victory with an excellent ride through some of the toughest terrain seen at the event so far.

Taking advantage of his ninth-place start position, Benavides was second on time to the checkpoint at kilometre 30, just one second down on the early leader. Continuing to push, the Argentinian soon moved into the lead, slowly increasing his advantage over teammate Howes to the finish. Moving up to second overall, Luciano will now open Wednesday’s stage four – a difficult challenge, but one the young racer is ready to embrace.

Almost matching Benavides for pace throughout the stage, Skyler Howes put in an excellent ride from his fourth-place start position to lose the minimum of time, despite catching the leaders and opening several kilometres of the special. The result extended Howes’ lead at the top of the rankings to over three minutes. The American star will now set off behind his teammate tomorrow with the hope of catching him and then working together to ensure another strong result for the team.

Stage four of the Rallye du Maroc leads riders north again from Laayoune to Tan-Tan. Totalling 665 kilometres, the stage represents the longest of the event and includes a demanding timed special of 346 kilometres.

Luciano Benavides:“I’m really happy to take the stage win here in Morocco. It’s great for my confidence and it comes down to all the hard work the whole team put in earlier this year. The day went well for me – I navigated well and was able to keep a good pace. It’s great to finish first and second with my teammate Skyler and we are sitting at the top of the overall, too. We still have two more days left to race, so I’ll stay focused and can hopefully do a good job of opening tomorrow.”

Skyler Howes:“Another hard day here in Morocco. Me and Luciano went one-two on the stage, which is super, super cool for us and cool for Husqvarna. It was quite tricky at first because the dunes were so soft and then the back sides of them were broken, which means it’s straight down to the desert floor. Not only is it difficult to navigate and choose a good line, but it’s really easy to get stuck and lose time. Thankfully it looks like everyone had the same issues, so it wasn’t too much of a problem. Later on the route opened up into much faster tracks, but with the wind and weather here, it has made finding the tracks really tough. After catching up to the leading group I just kept my head down to finish the stage safely. Second place on the stage and I’m still leading the rally, so things are good and I’m looking forward to tomorrow.”