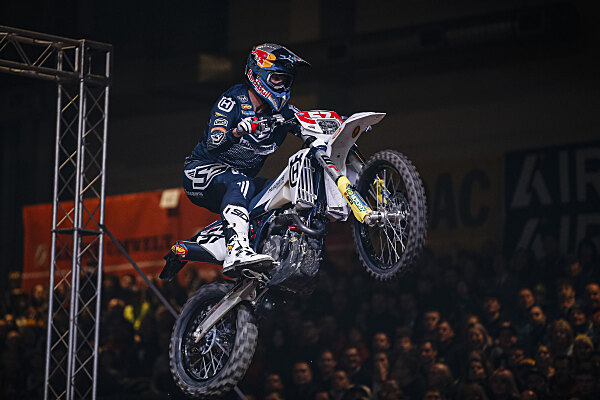 Husqvarna Factory Racing’s Billy Bolt has delivered the goods to claim victory at round two of the 2023 FIM SuperEnduro World Championship in Riesa, Germany. In what proved to be a night of edge-of-the-seat SuperEnduro action, the defending World Champion overcame numerous incident-filled races to secure the top step of the podium and extend his points lead.

With a full house of spectators in Riesa, Billy wasted no time in putting on a show. Blitzing the course for the SuperPole, Bolt topped the time sheets on his FE 350 by over one and a half seconds.

Eager to carry that form into the rest of the night, Bolt timed the gate drop of race one to perfection to claim the holeshot and take an early lead. Settling into a fast rhythm, Billy pushed hard to increase his advantage. However, a slight lapse in concentration overtaking lapped riders allowed rival Jonny Walker to momentarily slip by. Immediately regrouping, Billy put his Husqvarna back in front and with a couple of laps to go, he attacked hard to ride clear for a five-second margin of victory.

With the start order reversed for race two, Billy made his now customary cautious start to the race. Putting on a charge, he slotted into second place on lap two. Tangling with Walker while challenging for the lead, both riders crashed in the sand corner. Bolt was quick to his feet and a lap later had fought his way into the lead. However, despite building up a comfortable advantage, a crash on the penultimate lap dropped him back to fourth. Fighting hard to recover, he crossed the finish line in third, despite a dramatic clash with Taddy Blazusiak, which saw both riders hit the dirt after the chequered flag.

Putting race two behind him, Billy focused on winning race three to seal the overall victory in Germany. Third off the start, he took the lead on lap one only to crash once more on the rocky climb. A second crash knocked him back to third. Racing up to second place, he faced a five second deficit to leader Walker with three laps to go. Muscling his FE 350 around the course, he finally drew level with Walker and took the lead with one lap to go. This time holding firm, he claimed a dramatic and hard-fought race three victory to secure the top step of the podium in Riesa.

The 2023 FIM SuperEnduro World Championship continues with round three in Budapest, Hungary on February 4.

Billy Bolt:“I made life hard for myself tonight, but I’m happy to have come out on top in the end. It was pretty hectic on track all night and to be honest I made too many stupid mistakes. I hold my hands up for that. The speed was there, but with only one good line on the track mistakes were easily made. Maybe tonight was about shaking off that Christmas break, but I feel like I have room to improve for round three. Overall, I’ve finished on top of the podium and extended my points leads, so I’m happy with the outcome and look forward to Budapest.”