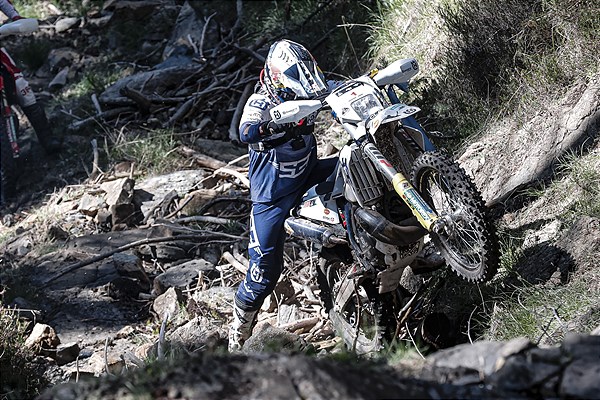 Still nursing the effects of a SuperEnduro wrist injury, Billy arrived at the second round of the FIM Hard Enduro World Championship looking to maximise his points at the first European round of the series. Kicking things off with a Straight Rhythm Prologue on Wednesday, Billy was at his best on the short street course. Winning all of his heat races, he easily progressed to the final and duly claimed a comfortable win.

However, with three long and demanding days in the mountains ahead of him, he knew the racing would get progressively harder. A strong start on Thursday saw Billy begin fourth on the road, picking off riders throughout the day to lead the way. Frustratingly, some navigation issues in the closing stages saw him slip down the order. But his result was still good enough to lead the overall classification into day two.

A gruelling two-hour and 30-minute morning special stage took its toll on Billy on day two as he lost a lot of time in the forest. Despite fighting hard in the afternoon special stages, he slipped to fourth overall in the classification.

With only one day to regroup, Billy knew a podium result or better would be tough to achieve. Beginning with a third fastest time on the first special stage, he then dug deep to finish second quickest on the two remaining special stages, battling right to the end. However, the damage done on day two would be too much to overturn and Billy had to be content with fourth. Added together with his runner-up result from round one, Billy now holds the joint lead in the FIM Hard Enduro World Championship after round two.

Hard enduro legend Graham Jarvis was out in force in Serbia, pushing the pace at the front of the Xross Hard Enduro Rally. Easing into day one he placed fifth fastest. Finding the difficult conditions of day two more to his liking, Graham was flying on his Husqvarna TE 300 and ended his day third overall. Sensing another podium result was on the cards, Jarvis pushed hard to clinch his second top-three result of the season. He now holds the championship points lead together with Billy Bolt.

The FIM Hard Enduro World Championship continues with round three at Erzbergrodeo on June 16-19 in Austria.

Billy Bolt:“It’s been hard work this week. I’ve felt drained of energy here in Serbia and was having to dig deep each day to keep in the fight. I’ve been battling a wrist injury since pretty much SuperEnduro ended back in March, it’s really hurt my fitness. And with this race being really physical that showed. Of course, it was nice to win the prologue on Wednesday, but I didn’t get to ride the pace I wanted during the rest of the week. That said, I’m now leading the championship, so I’ll take that as a positive. Erzbergrodeo is next and my focus is to regroup and get ready for that!”

Graham Jarvis: “It’s awesome to get on the podium again. I wasn’t sure how my fitness would fare in this multi-day race, but I managed to get there in the end. At 47 years old I can’t believe I’m in joint lead of the championship. We’ve got Erzberg next, that’s the big one. But I’m riding well and I’m going to go for it!”

Championship Standings (Provisional After Round 2)