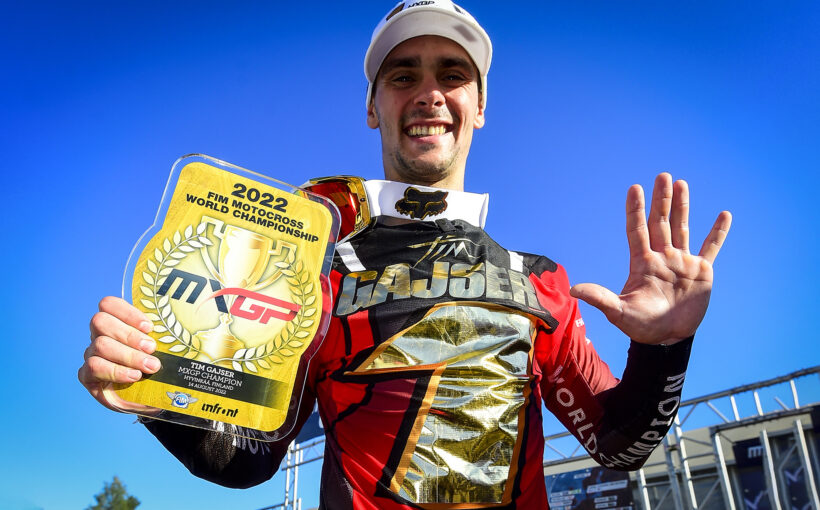 Five is the magic number for Team HRC’s Tim Gajser who secured his fifth FIM Motocross World Championship title at the MXGP of Finland.

The 2022 season has been filled with ups and downs for the Slovenian, who battled illness halfway through the season, though this did not stop him in racking up wins, podiums – and most importantly those vital championship points to be the only rider to ever hold the red plate this season.

2021 saw Gajser narrowly miss out on the chance to fight for the crown at the final race of the season in Mantova, after a penalty ended his hopes prematurely. Though Gajser turned that heartbreak into motivation and there was no doubt that he was going to bring his ‘A game’ after the short winter break.

Gajser started the 2022 season with an overall victory in Great Britain and followed that up with two more wins before his winning streak was broken at the MXGP of Portugal by Jorge Prado, who was his closest championship rival at that point. Three more consecutive wins followed in Trentino, Latvia and Maggiora before illness took its toll and Gajser struggled at the next few GPs.

Like last year, Germany was a turning point that saw the HRC rider back on the top step with another victory in Indonesia but then again, Gajser fell off the podium radar, though still managed to score decent points to stay well ahead of his competition.

A comfortable championship lead meant that pressure was not a factor for the Honda rider who took a sensible approach for the next races before he was able to wrap up the title early in race two at the Finnish Grand Prix in Hyvinkää.

Not only did Gajser lead the championship from the very first round, but he also tops the charts when it comes to the race statistics. With two rounds remaining of the 2022 campaign, Gajser has led the most laps (184), won the most races (13) and Grand Prix (8) as well as made the most podium appearances (11) and has had the most pole positions (4). Let’s see if he can add to those stats in the final two GP’s.

Tim Gajser started his motocross journey at a tender age of three and by the time he reached his seventh birthday (2006) he entered the EMX65 Championship where he finished third. The following year, Gajser claimed the title in the same category and then repeated his success two years later in EMX85.

From the EMX125 class Gajser made the jump into the MX2 World Championship where he finished in 20th and was picked up by Honda Gariboldi (now known as Team HRC) for the following season where he made a big improvement to place fifth overall with some solid results that included six podium finishes.

2015 was a big year for the Slovenian who claimed his very first world title in the adult division to become the MX2 World Champion that time around. Though he struggled in the beginning of the season, Gajser was able to turn things around when the series returned to Europe to get his first MX2 race win and GP victory at the MXGP of Trentino, Italy. He then fought an injury during a couple of the races, though was able to come back strong and clinch that title by the end of the season.

In 2016, Gajser made the move up to the premier MXGP class, where he was nothing short of extraordinary. The Slovenian won a total of 15 races, 7 Grand Prix’s and took a total of 15 out of a possible 17 podiums. Having showed maturity and strength all season long, Gajser made history to take back-to-back titles in MX2 and MXGP.

The 2017 season was a tough one for Gajser, as he lined-up at the opening round in Qatar as the defending champion, but a year full of crashes and injuries made it hard for the Slovenian to fight back, which forced him to settle for fifth that time around. Then 2018 was another blow, as he entered the season with a big injury, which meant he had to skip the opening round and focus on recovery. That year Gajser finished without any victories, though still managed fourth place in the championship standings.

The following year, 2019, Gajser regained his strength, and it was consistency which helped him win his third title. He won a total of 16 races, 9 GP’s and made 15 podium appearances. After winning the title that season, he was ready to defend his number one status in 2020 and he was able to do just that!

While some might feel pressure to defend the title, Gajser made sure he wouldn’t let it phase him. While the first GP did not deliver the result he had hoped for by the end of the campaign he racked up 15 race wins, 14 podiums and 5 Grand Prix victories.

Fast forward to 2021, the season that will no doubt remain in the minds and hearts of any motocross fan for decades to come, as we all bared witness to one of the most exciting title fights in the history of the sport that saw Jeffrey Herlings, Romain Febvre and Tim Gajser go head-to-head for the crown that went down to the very final race of the season.

While at the opening few GP’s Gajser was looking solid and held the championship lead, the second half of the season was a turning point after a shoulder injury put a huge roadblock in the Slovenian’s title hopes.

While Gajser was able to recover and fight back to remain competitive, a mistake, that was out of his control, saw him penalised and ultimately ended his title fight earlier than he would have wanted. Gajser finished the season third behind Herlings and Febvre…