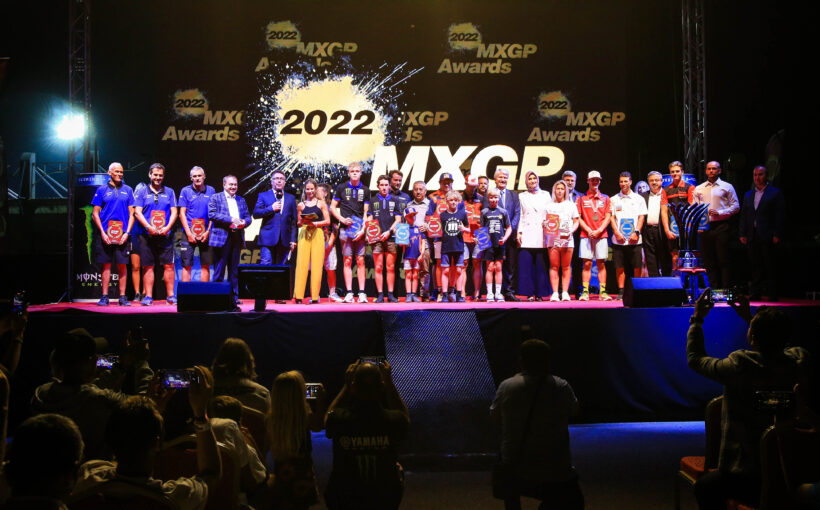 The annual MXGP Awards celebrated yet another successful season of the FIM Motocross World Championship at the final round at the Bitci MXGP of Turkiye!

Once the chequered flag had fallen for the final time this season and the 2022 World Champions were officially confirmed with gold medals, it was time to begin the festivities with the annual ceremony.

The awards took place in the Moto Festival area at the Afyon circuit, in front of a huge crowd of fans and paddock personnel who joined in on the celebrations, which was the perfect end to a thrilling season of racing.

The MXGP Awards were hosted by the MXGP-TV Commentator Paul Malin and MXGP-TV Presenter Lisa Leyland with the entire event live-streamed worldwide on www.MXGP-TV.com, as well as MXGP’s YouTube channel.

The evening kicked off with a special message from Infront Moto Racing’s CEO David Luongo and FIM President Jorge Viegas who shared a few words about the 2022 season and took the opportunity to congratulate everyone for their efforts.

Infront Moto Racing CEO David Luongo: “First of all, Thank you all for coming to this fantastic Gran Prix here in Turkiye. Big thanks to the Governor, the Mayor, the Turkish Motorcycling Federation, the Organizer and everybody who made this event possible. This season has been a challenging one, being the first one post-covid. It was amazing to have the overseas back, with Argentina the first one, which was a big symbol and then Indonesia and other events that were missing during the previous two years, like Sweden and Finland. And also having the public back at the races was a very big and important moment. In MXGP, we have a great Champion as Tim Gajser who did not have it easy, with plenty of fast guys behind him pushing to win. And MX2… What can I say? It was incredible. Big Congratulations to Tom but also Jago who pushed hard and gave it his all. This evening it’s great to have all of the Champions with us, including the Junior and European champions, really it’s a full package here to celebrate. Thank you to all of the teams and riders for the support, motocross is a big family and everyone involved works incredibly hard to deliver a great championship like the one we saw again this year. Thank you all, enjoy your evening”.

FIM President Jorge Viegas: “Thank you so much to everyone in Turkiye, my friends, the riders, teams and special thanks to the public. What a better scenery than here, beautiful place and people. We had a wonderful championship which was decided today. We look forward to coming back even better next year. Enjoy your evening with the best riders in the world”.

The Awards ceremony officially began, as the winning teams and manufacturers were presented with their awards. Team HRC and Red Bull KTM Factory Racing received their winners’ plaques for securing the MXGP and MX2 titles, while Yamaha swept the manufacturer titles in MXGP, MX2 and WMX.

This year, Red Bull GasGas Factory Racing’s Simon Längenfelder was the recipient of the Jan de Groot Award that honours the most promising young talent. Längenfelder was impressive this season as he ended the year third in the MX2 standings with 2 race wins, five podiums, including his Grand Prix win in Great Britain!

And then it was time to find out which MXGP rider was the winner of the Best Rider of the Year Sponsored by Athena prize! The newly crowned MXGP World Champion Tim Gajser was declared winner, having received the most fans’ votes in total throughout the 2022 season.

The evening then concluded with the awards for the two FIM Motocross World Champions, Tim Gajser and Tom Vialle who each received their championship plates, along with their champions rings as part of their prizes for this season.

Best Rider of the Year, Sponsored by Athena: Tim Gajser