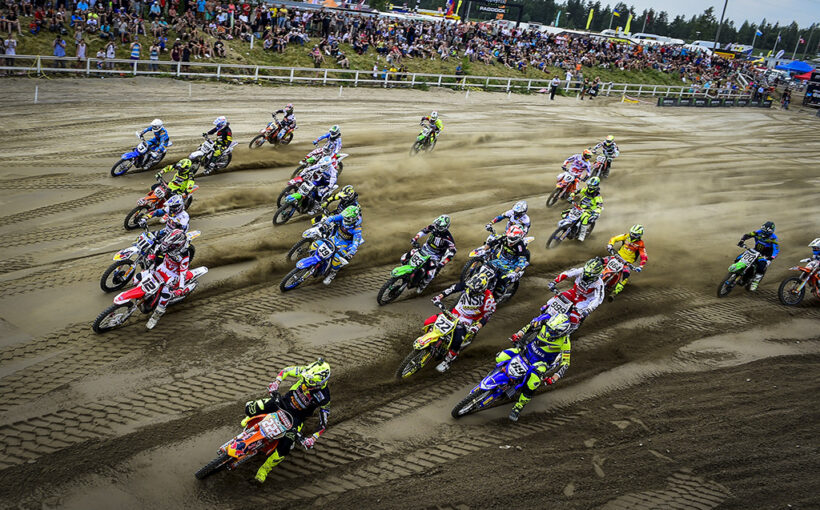 Crucial Championship Weekend Predicted at the MXGP of Finland!

With just three rounds remaining on the 2022 FIM Motocross World Championship calendar, it’s crunch time in both the MXGP and MX2 Championships.

Team HRC’s Tim Gajser has a chance to secure his fifth world title at the MXGP of Finland this weekend, while Monster Energy Yamaha Factory Racing’s Jago Geerts and Red Bull KTM Factory Racing’s Tom Vialle remain tight in their title fight and are separated by just 23 points.

The MXGP title is not the only one that could be celebrated this weekend, as the final stop of the EMX125 Presented by FMF Racing championship is taking place in Hyvinkää, where Fantic Factory Team Maddii’s Cas Valk is looking good for his first European crown!

The EMX250 and EMX Open riders will also line up for their penultimate rounds with Hutten Metaal Yamaha Racing’s Rick Elzinga and WZ Racing’s Jose Butron still heading the standings.

The MXGP of Finland will return to the beloved Hyvinkää circuit that hosted its very first Grand Prix in 1965 which was won by the legend Torsten Hallman. Since then, the Finnish track has hosted a total of 23 GP, with the most recent one which took place in 2014 won by Antonio Cairoli and Red Bull KTM Factory Racing’s Jeffrey Herlings.

Team HRC’s Tim Gajser will enter the 16th round of the series just one step from his fifth world title. Though it’s not done just yet, to secure the crown in race one, Gajser would need to finish first and Monster Energy Yamaha Factory Racing’s Jeremy Seewer outside the top five, but either way, Gajser needs to score at least 35 points to leave the Finnish Grand Prix as the 2022 World Champion.

And Seewer is not bound to make this easy as he continues to rack up win after win, his latest being at the MXGP of Sweden where he secured his third overall victory of the season. It’s no secret that the Swiss is having one of his most successful seasons since moving up to the MXGP class, and while the possibility of the title may be out of reach, that doesn’t mean he can’t continue to challenge for race wins and the top step of the podium, which can no doubt be expected again this weekend.

Looking back at the last time we visited Hyvinkää, Gajser finished on the box alongside Red Bull KTM Factory Racing’s Jeffrey Herlings who was the winner and Jordi Tixier of JT911 Racing Team who occupied the third step.

Other riders to look out for this weekend also includes Monster Energy Yamaha Factory Racing’s Glenn Coldenhoff and Maxime Renaux who alongside Seewer gifted the team an amazing 1-2-3 result in the first race in Uddevalla. Seewer followed that up with his over victory in race two, after Renaux won the first race, while Coldenhoff rounded out the podium to finish third overall. While Seewer and Coldenhoff will be looking to carry on with their podium success, Renaux will be hoping to bounce back after crashing out big in the second MXGP heat.

Team HRC’s Mitch Evans also turned some heads in Sweden after his triumph in the qualifying heat and then an impressive performance in the opening race where he battled from last place to tenth and then a strong fourth in race two. It will be interesting to see if he can bring this intensity to Finland and possibly climb the podium for the first time since his big wrist injury.

iXS Hostettler MXGP Team’s Valentin Guillod was another rider who stood out in the previous round after a 9-12 result that put him 10th overall. Guillod took the Fox Holeshot in race one and was inside the top five for most of the race before a mistake in the final stages cost him some vital positions. Nonetheless, this was hopefully a confidence boost for Guillod who we could see inside the top 10 more regularly as we finish off this season.

Kawasaki Racing Team MXGP’s Romain Febvre came close to his first podium finish since coming back from injury. Febvre has been challenging at the sharp end since his comeback, but consistency is what he will need in the last three GPs to end the year on a high as he begins his focus for the title in 2023. Last time around in 2014, Kevin Strijbos, who is now the team coach at the Kawasaki team, was on the box, so he could give Febvre and Ben Watson some useful tips for this weekend’s GP.

Standing Construct Husqvarna Factory Racing’s Briand Bogers and Pauls Jonass will be looking for a much better race weekend in Finland, as Bogers edges closer to sixth in the championship and is only three points behind Honda 114 Motorsports’ Ruben Fernandez who made his return in Sweden. Meanwhile, Jonass did not have the weekend he had hoped for in Sweden after finishing 12th overall.

Red Bull GasGas Factory Racing’s Jorge Prado will be looking to put on his best performance this weekend, as he remains solid in third in the championship standings.

In MX2, the Finnish Grand Prix will be yet another critical weekend in the title fight between Monster Energy Yamaha Factory Racing’s Jago Geerts and Red Bull KTM Factory Racing’s Tom Vialle who remain separated by 23 points after tying on points in Sweden.

Geerts came out on top after securing the win in race two, thus taking the number one trophy and keeping the points levelled. Though the MXGP of Finland will be important as it could be the deciding weekend for the title as Vialle will have the advantage of the home Grand Prix in France the following weekend. For Geerts, it will be important to maximise his points this time around to have a comfortable lead ahead of the trip to St Jean d’Angely.

Red Bull GasGas Factory Racing’s Simone Längenfelder finished third on the box in Sweden after also leading some laps in the second heat. As it stands Längenfelder has five podiums to his name and could add another one this time around. Monster Energy Yamaha Factory Racing’s Thibault Benistant also has five podiums to his name and will be eager to get back in the mix after a couple of hard weekends.

Nestaan Husqvarna Factory Racing’s Kay de Wolf and Roan van de Moosdijk are another threat for the podium this weekend, as both will be looking to put the struggles of last weekend behind them and deliver some top scores. de Wolf has now passed Ship to Cycle Honda SR Motoblouz’ Stephen Rubini in the standings and is eighth, while Moosdijk is riding back to fitness but is keen on a podium by the end of the year – which could be possible in Finland.

JP253 TEM rider Jan Pancar was impressive at the MXGP of Sweden as he ran inside the top three for much of the qualifying race and then delivered a solid result in race two where he placed sixth. Race intensity is still something that he needs to work on, as he said so LIVE on MXGP-TV, but it’s still a very impressive result from the privateer rider.