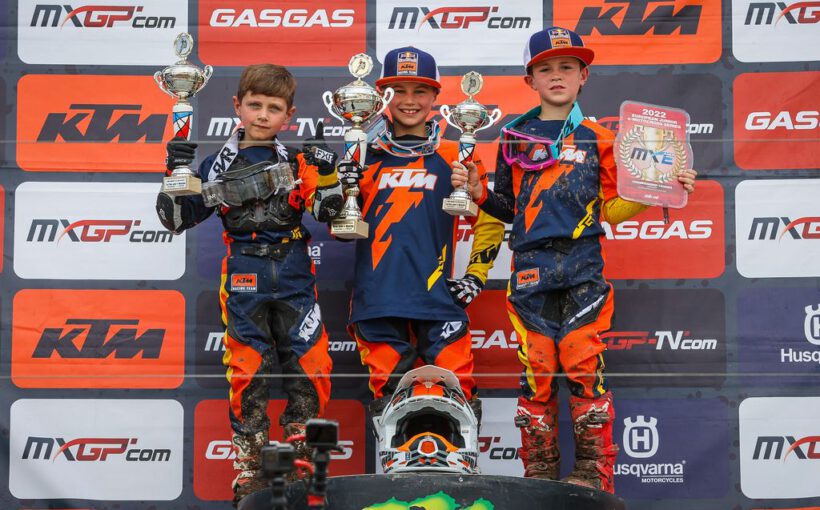 Record Number of Riders Line Up for Round Three of the European Junior e-Motocross Series.

Gaining in popularity with every passing round, the third stop of the European Junior e-Motocross Series attracted a record line-up or 35 riders from 13 countries. The strong entry delivered close racing throughout both races around the Teutschenthal circuit in Germany with the overall victory secured by young French racer Timoteï Cez. Joining Cez on the rostrum were a pair of British racers, Austin Edwards in second with Cameron Berry in third.

Racing to victory at round one of the European Junior e-Motocross Series just two weeks ago in Spain, Timoteï Cez endured a tough second round at home in France to place seventh overall. Eager to put his title aspirations back on track in Germany the youngster was flawless all weekend. Posting the fastest time in qualifying, he then stormed to victory in both races to secure his second overall win of the series.

In the opening race, Cez lead from start to finish aboard his KTM SX-E 5 while an intense battle for the remaining spots on the podium unfolded behind him. Round two overall runner-up Austin Edwards was on the move throughout the seven minute plus one lap race, advancing from fourth on lap one to make the pass for the runner-up position on the final lap. Spaniard Logan Liberal Rodas chased Edwards across finish line for third with current series leader, Berry, who crashed twice, in sixth.

Race two saw Cez once again show his competition the fast way around the hardpack circuit, claiming another impressive victory and securing maximum points. Capitalising on their strong starts, Berry, Austria’s Elias Eder, and Edwards quickly found themselves in a race-long fight for a place on the podium. It was Berry who would come out on top of the tussle to finish as runner-up, with Eder third and Edwards fourth. At the finish line, the trio were separated by just three seconds in what was a truly intense end to the second race in Germany.

At the conclusion of an exciting third round, Berry retains the European Junior e-Motocross Series lead by just a single point over Cez, while the super-consistent Edwards advances to third. Now, with only two rounds to go and 100 points still up for grabs, the series will conclude with a double header event at the MXGP of Czech Republic on July 16-17.

Timoteï Cez: “My weekend went really well here in Germany. I must thank my parents and all of my sponsors. It was just a perfect weekend for me. I had good starts in both races, which helped a lot, and I love this kind of track with it being hardpack and all the beautiful ruts. It’s great to win again and I’m excited for the final two rounds next month.”

Cameron Berry: “The first race wasn’t so good as I crashed twice but I was able to finish sixth and score some good points. Race two was much better for me by finishing second and I wasn’t too far from the leader, so I was much happier with that one. I’m in a good position with the series lead going into the final two rounds so I’m happy and excited for the trip to Loket.”