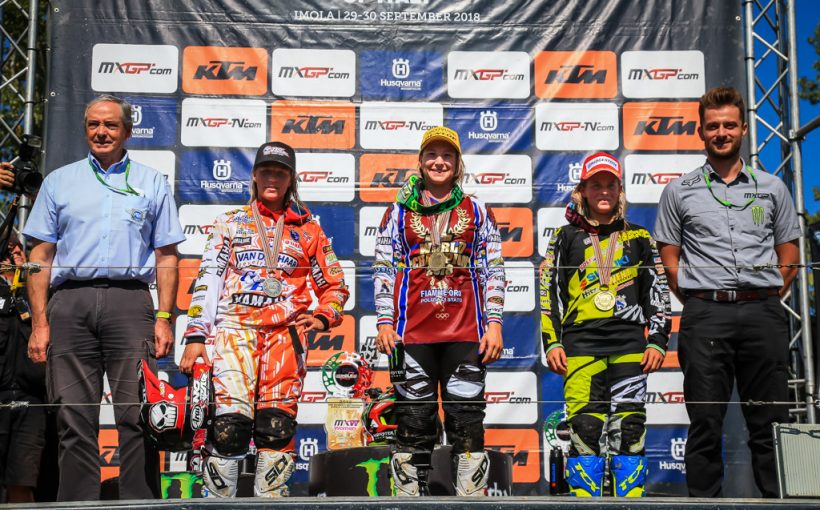 Imola, Italy’s Autodromo Enzo & Dino Ferrari circuit is the venue for a hand full of racing this weekend and in addition to the always present MXGP and MX2 classes it also hosts the season finale of the FIM Women’s Motocross World Championship. A hard fought season for the women concluded today with MXFONTA Racing Yamaha’s Kiara Fontanesi taking her 6th FIM Women’s Motocross World Championship title.

Both races of the Women’s final round were watched closely with the home crowd rooting for the Italian Fontanesi. Holding the championship leader’s red plate on her, Yamaha Fontanesi faced her closest competitor, Nancy Van de Ven, who came into race 1 with a 8 point deficit on the defending champion.

Van de Ven took the lead early yesterday and after tight racing with back and forth action Van de Ven took the win while Fontanesi took second and lost 3 points. The top five never shifted positions in any of the laps recorded and was rounded out by Larissa Papenmeier, KTM Silver Action’s Amandine Verstappen, and Stephanie Laier. The gap of Fontanesi was narrowed to only 5 points for today’s championship deciding race 2.

Less than a lap later Fontanesi was back by the German as was Van de Ven who jumped her way into second. The race was then on between the two title contenders and a game of cat and mouse ensued.

Fontanesi’s lead grew to around 3 seconds by lap 5 but with 7 minutes and 2 laps to go Van de Ven was back applying pressure less then a second and a half behind. Fontanesi found relief though as Van de Ven came up short on the uphill triple bouncing and missing her line. Then only a section after the first mistake another missed line from Van de Ven allowed the gap to grow a full second.

With only 2 laps remaining Van de Ven had again chipped the lead of Fontanesi back down but the Italian stayed strong to take the race win, the overall, and most impressively her 6th WMX World Championship!