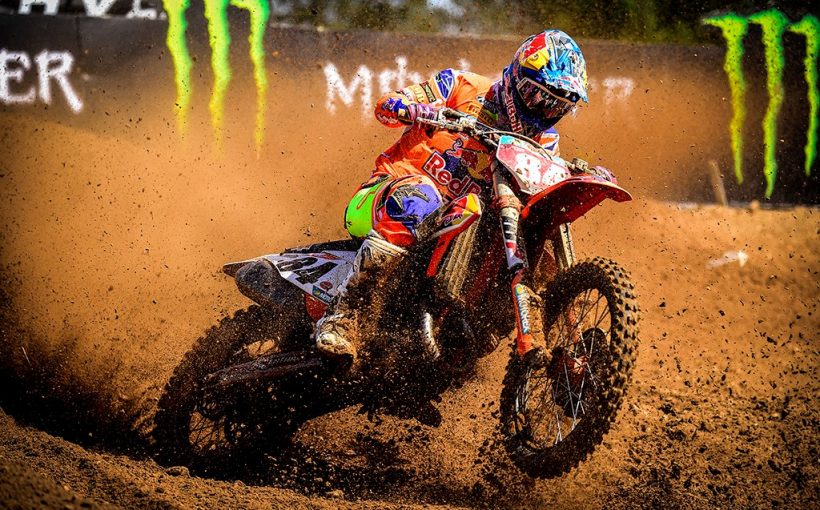 The 2018 MXGP of Latvia has left us filled with action and close racing today with the best motocross riders in the world lining up behind the gate and taking on the challenging Kegums circuit. For the second year in a row Red Bull KTM Factory Racing’s Jeffrey Herlings and Rockstar Energy Husqvarna Factory Racing’s Thomas Kjer Olsen have left Latvia as overall winners.

Only a short drive from the Latvian capital city of Riga, Kegums was full of warm weather mixed with deep sand and a technical circuit to provide not only a challenge of skill and mental strength but also physical endurance and quick reactions. Latvia’s motocross fans lined the edges of the circuit and its hillsides to watch their national hero, Red Bull KTM Factory Racing’s Pauls Jonass, along with all the other riders of the FIM Motocross World Championship cheering at the top of their lungs.

Latvia’s Kegums circuit was reversed ahead of this weekend’s racing but the changes had little effect on Red Bull KTM Factory Racing’s Jeffrey Herlings. Herlings, who won his first ever MXGP overall here last year, started the weekend in dominant form first topping the Free and Time Practice sessions by a substantial margin and then winning Saturday’s Qualifying race by 50 seconds.

On the other side of the Red Bull KTM Factory Racing paddock was the #222 Antonio Cairoli in his 222nd GP after 14 years in the World Championship. Cairoli was also remarkable on Saturday with a charge from near last to finish Qualifying in 3rd.

Today the fortunes swapped with Cairoli grabbing the Race 1 FOX Holeshot ahead of Monster Energy Yamaha Factory MXGP’s Romain Febvre while Herlings was around 10th. Cairoli and Febvre battled for the lead in the first few laps while Rockstar Energy Husqvarna Factory Racing’s Gautier Paulin ran in 2nd.

Febvre’s Monster Energy Yamaha Factory MXGP teammate, Jeremy Van Horebeek jostled with Monster Energy Kawasaki Factory Racing’s Clement Desalle over 4th the first laps before Herlings found his way past both on lap 4. Paulin then started to get pressured by Herlings and lost his 3rd spot only 2 laps later.

Team HRC’s Tim Gajser had a challenging race 1 finishing 9th but the result was impressive after starting outside of the top 20.

Race 2 was more of the same off the start with Febvre taking the FOX Holeshot and Cairoli right alongside while Herlings was outside the top 5. Febvre crashed on the opening lap and Cairoli fought with the other Red Bull KTM Factory Racing rider, Glenn Coldenhoff.

Cairoli led the field at the end of the first lap while Herlings crossed the finish in 5th. Tim Gajser made up for his poor start in race one by running in 3rd the first 2 laps of race 2. Paulin ran in 4th the first lap but lost the spot by the second time around to Herlings.

Herlings then again made his way to the front as Cairoli checked out with a 10 second lead. On lap 3 Herlings was into 3rd by Gajser and then into 2nd the following lap around Coldenhoff, on the same lap Coldenhoff was also passed by Gajser and later Paulin.

Febvre would fall for a second time when he ran into the back of Honda Redmoto Assomotor’s Arminas Jasikonis, the fall left Febvre unable to finish the race. Febvre’s fellow Frenchman, Gautier Paulin, was however able to take 3rd from Gajser on lap 12.

As Herlings cut into the lead of Cairoli the Italian simultaneously was caught in lapped traffic. Cairoli’s issues mixed with Herlings’ charge resulted in Herlings making a pass for the lead 6 laps before the finish. Across the finish line first was Herlings, Cairoli, and Paulin securing the overall in the same order. Just missing out on the overall podium was Desalle and Gajser.

Jeffrey Herlings in the post race press conferene said: “I think it was a good weekend, you know yesterday was obviously perfect, I was able to get the holeshot and do my own thing. It was a little more demanding than I was expecting today especially after the result of yesterday but we did good things for the championship.”

Antonio Cairoli: “I’m really happy because my speed was good and we are in one piece, the track was very difficult and the rhythm was really very fast. I am a little disappointed with the second race, my plan was to hold him a little bit longer and fight for the GP win. But overall I’m really happy about the starts and the championship is very long so we are looking forward to the next races.”

Gautier Paulin: “I’m feeling good, physically, and I’m improving the starts. I crashed in the Qualifying race yesterday but I am feeling happy with the bike, the setup and the engine.”

Coming into the MX2 races this weekend many eyes were on Red Bull KTM Factory Racing’s Pauls Jonass and Jorge Prado but at the start of MX2 race 1 it was Rockstar Energy Husqvarna Factory Racing’s Thomas Kjer Olsen who made the biggest impression.

Olsen took the holeshot and led Jonass while Prado clipped the back of Rockstar Energy Husqvarna Factory Racing’s Thomas Covington and went down. With the threat of Prado missing Jonass was able to focus on catching Olsen but the tall Dane out rode Jonass leading every single lap to the checkered flag.

Behind the two front runners was originally STC Racing Husqvarna’s Henry Jacobi and Honda 114 Motorsports Hunter Lawrence. Lawrence fell hard on lap 2 and was unable to finish the race. Jacobi held 3rd for 7 laps before a charging Covington made it past the German.

2 laps after Covington’s pass on Jacobi, Kemea Yamaha Official MX2’s Jago Geerts passed the #29 and 2 laps after that Geerts’ Teammate Ben Watson did the same. At the finish Olsen beat Jonass, Covington, Geerts, and Watson while Jacobi took 6th.

Race 2 was a redemption race for Prado as he took his 7th Fox Holeshot of the season and sprinted away from the field. Jago Geerts had an amazing start in second ahead of Watson, Olsen, and LRT KTM’s Davy Pootjes. By lap 7 Olsen was getting into a flow and the next lap made a pass on Watson and Geerts directly after.

Though Olsen was in 2nd Prado was long gone but Jonass was fighting his way forward from 13th on lap one. As Prado led he fell in the first turn just before Pit Lane which essentially cost him his entire advantage over Olsen.
Prado would however rebound from the mistake well and regain a gap with the help of an error from Olsen. Across the finish Prado took the race win by 2.6 seconds over Olsen, Geerts, Watson, and Jonass. In the overall classification Olsen claimed his second Latvian GP victory in 2 attempts while Geerts achieved his first career MX2 podium in 2nd and Jonass took 3rd.

Thomas Kjer Olsen stated: “It is a good feeling winning and I don’t know, there is something about this place that I really like. I have always had a good feeling here even in my European Championship days. It kind of reminds a little bit of Denmark but this is how I want to ride every weekend.”

Jago Geerts: “It was a really good weekend for me, my riding was good all weekend, just two solid races and second overall is really good for me.”

Pauls Jonass: “The home GP is always a little more difficult than the others but overall I’m really happy to be on the podium. The fans were really crazy, I could hear them when I made every single pass which was really good, they pushed me forward and I’m really thankful for everyone who came to support me, it helped a lot!”