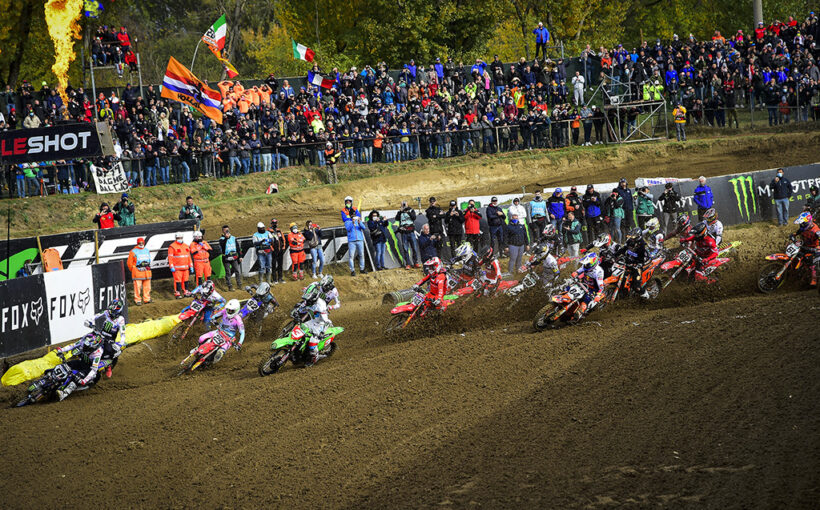 The FIM Motocross World Championship continues this weekend with the second round of the series heading to Mantova for the MXGP of Lombardia.

Last season, Mantova was at the forefront of some of the most memorable moments from the 2021 season and even in history of the sport, including the victory of Team Italy on home soil at the Monster Energy FIM Motocross of Nations, the intense title showdown between Red Bull KTM Factory Racing’s Jeffrey Herlings, Kawasaki Factory Racing’s Romain Febvre and Team HRC’s Tim Gajser and the last race of the legendary Antonio Cairoli.

This time around Mantova will have a lot to live up to but if the actions of the British Grand Prix last weekend, are anything to go by, nothing less can be expected!

Joining the MXGP and MX2 stars this weekend will be the EMX250 and Women’s Motocross World Championship riders for their opening rounds of the 2021 season.

Team HRC’s Tim Gajser will enter the second round with the red plate on his CRF450R. There is no doubt that the Slovenian will look for that 1-1 that he so narrowly missed out on in Matterley Basin, after crashing out of the lead in race two. Gajser has won twice in Mantova, which was back in 2016 and 2020 but another win could be highly likely if he carries the same momentum as he had in Great Britain.

There to keep him on his toes once again will be Red Bull GasGas Factory Racing’s Jorge Prado who finished second on the box last weekend and won the second race after fending off Gajser for most of the race. The starts have been a big advantage for Prado who has been able to get out in front early doors, so the same can be expected this weekend as he will once again battle for the podium, especially the top step which he is yet to achieve in Mantova in the MXGP category (he has won in MX2 in 2019).

Red Bull KTM Factory Racing’s Jeffrey Herlings and Kawasaki Racing Team MXGP’s Romain Febvre will once again miss out on the Grand Prix, with their return yet to be confirmed.

Monster Energy Yamaha Factory Racing’s Jeremy Seewer, Maxime Renaux and Glenn Coldenhoff were out in full force in Great Britain with the trio finishing third, fourth and fifth respectively. For Seewer, it was his first time ever finishing on the box at the opening round of the championship and he will no doubt be motivated to make it back-to-back podiums and add a second GP win in Mantova, to the one he got in 2020, which was also his first ever GP victory in the MXGP class. Meanwhile Renaux was impressive to say the least on his first outing in the MXGP class, so it will be interesting to see if he can bring this competitiveness once again.

MXGP rookie Jed Beaton from F&H Kawasaki Racing Team delivered some strong results during his first race in the premiere class finishing sixth overall. It would be nice to see him at the sharp end again this weekend as he gets to grips with the new category.

Same goes for Honda 114 Motorsports’ Ruben Fernandez who looked promising in Matterley Basin. The Spaniard got unlucky in race one but had a much stronger second race where he placed fifth and definitely has the potential for something more in Mantova.

Alberto Forato of SM Action Racing Team YUASA Battery was also impressive at the British round as he delivered his first top 10 overall result of the season, finishing seventh. Heading to his home round, it would be nice to see him build upon his previous result.

While his fellow countryman Alessandro Lupino of Beta SDM Corse will hope to bounce back after a disastrous first outing with the new team. Lupino did not finish either of the MXGP races and therefore scoring 0 points last weekend.

For Gebben Van Venrooy Yamaha Racing’s Arminas Jasikonis it was much of the same, as the Lithuanian struggled in both races. He DNF’d race one and place 20th in race to and will no doubt be looking to improve in Mantova.

In MX2, the second round of the MX2 World Championship will be interesting to see whether Red Bull GasGas Factory Racing’s Simon Längenfelder can bring the same type of dominance that we saw in Matterley Basin. The young German won the qualifying race, both races, took both Fox Hoelshots and left the first round with the red plate. Pressure will be high to deliver something along the same lines, so it will be interesting to see how he can adapt to the more sandy circuit.

Meanwhile, Red Bull KTM Factory Racing’s Tom Vialle will look for every opportunity to fight back and get himself a race win and on the top step of the podium. The Frenchman confirmed in a press conference that he was not feeling 100% after his foot injury last year but is hoping to re-group in Mantova. Vialle is yet to win in Mantova but has come close before, so maybe this time will be his turn.

Monster Energy Yamaha Factory Racing’s Jago Geerts will look to repeat his podium success in Mantova as he continues to get back to strength after his arm surgery that only saw him back on the bike days before the first GP. Geerts has the potential to be strong in the sand of Mantova as he has won the Grand Prix there three times before, twice in 2021 and once in 2020 so as far as favourites go, Geerts is among the top to win.

Nestaan Husqvarna Factory Racing duo of Kay de Wolf and Roan Van De Moosdijk will be looking for that podium spot this weekend after tying on points in fourth last weekend. Both are strong sand riders so could be serious contenders for race wins and certainly for the podium.

F&H Kawasaki Racing’s Kevin Horgmo showed a lot of promise at the opening round, as he finished eighth overall but ran with the leaders in both races. This is Horgmo’s first season back in MX2 after he made the move back down to EMX250 in 2021. Now part of the F&H squad and under the guidance of former GP rider Marc De Reuver, it will be interesting to see how Horgmo will match up in the sand.

Big Ban World MTX Kawasaki Racing’s Mikkel Haarup also showed what could be in store as he finished sixth overall with an 8-7 result in the races. As did Stephen Rubini of Team Ship to Cycle Honda who was 7th overall and Isak Gifting of Hitachi KTM fuelled by Milwaukee who ended his weekend 9th overall. All three of the riders were right in the mix during the weekend and much of the same could be expected this time too.

Meanwhile home rider Mattia Guadagnini from Red Bull GasGas Factory Racing will need to re-group and bounce back as he currently sits 10th in the MX2 World Championship standings. Many may have expected Guadagnini to be on the podium at the opening round, since he podiumed in Great Britain last year. But that was not the reality, as a 13-8 result was the best he could do. The MXGP of Lombardia will be an opportunity for Guadagnini to fight back and one that he will need to make the most of, in order to keep with the title contenders this year. He has previously won in Mantova in the EMX125 and EMX250 categories, which means he’s no stranger to winning in  the hard sand, and it could be just what he needs to boost his confidence for the remainder of the year.

Another name to look out for at the Italian Grand Prix is SM Action Racing Team YUASA Battery rider Andrea Adamo who has picked up pretty much where he left off in 2021. On his first outing in 2022, the Italian has finished 10th overall, which is a nice result to build upon this season.