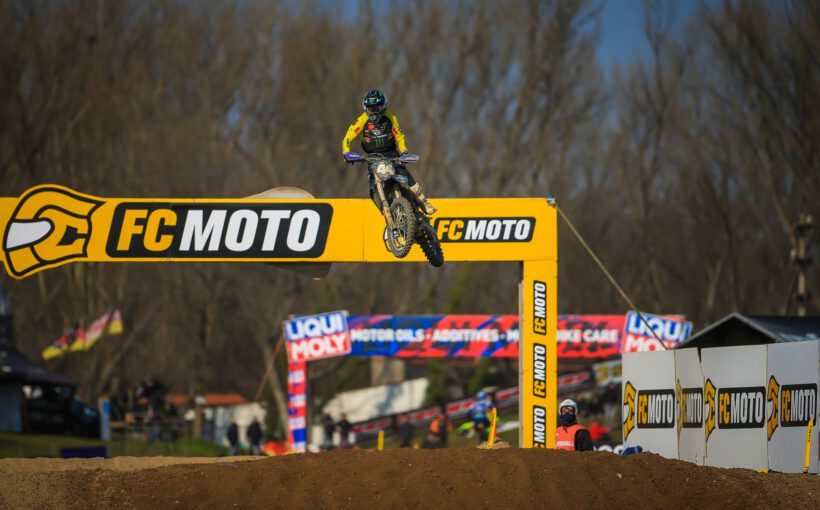 Elzinga Secures the Overall Win in EMX250 at the Round of Lombardia.

The EMX250 riders have completed the opening round of the series in Lombardia, with Hutten Metaal Yamaha Racing’s Rick Elzinga victorious.

The Dutchman leaves Italy with the red plate, ahead of Fantic Factory Team Maddii duo of Cornelius Toendel and Haakon Osterhagen.

In EMX250 race one, it was Mike Gwerder of WZ Racing Team who was flying out of the gate and led the way. Behind him was David Braceras from Team VRT KTM Veritise, Raf Meuwissen of Raf’s Motorsports, Marcel Stauffer of Sturm STC Racing Team and Andrea Bonacorsi from Hutten Metaal Yamaha Racing.

Stauffer then crashed out of fourth which allowed Bonacorsi and Rick Elzinga of Hutten Metaal Yamaha Racing through, but Bonacorsi’s charge to the front did not last long as a battle with Cornelius Toendel of Fantic Factory Team Maddii ended with Bonacorsi down on the ground and Toendel moving up to fourth.

Elzinga then set the fastest lap of the race, a 1:58.443 as he closed in on Braceras for second position.

Further down the field, Federico Tuani of SM Action Racing Team YUASA Battery and Stauffer came together before a take off a jump, which resulted in a DNF for Tuani, while Stauffer was able to continue for a few more laps but ultimately did not finish either.

Meanwhile on lap four we saw a change for the lead as Braceras got by Gwerder! Elzinga was looking to launch an attack of his own on the Swiss and did just that a lap later. It then took him just two more laps to pass Braceras for the lead, as Gwerder continued to drop down the order.

Towards the final laps of the race we saw Jorge-Matthias Talviku of Sahkar Racing make his way up the order and battle it out with Braceras for second, but he was not able to find a way through and was forced to settle for third.

Elzinga took the first race victory of 2022, with Braceras holding on to second. Haakon Osterhagen from Fantic Factory Team Maddii finished fourth on his first outing in the EMX250 class, while Oriol Oliver of WZ Racing Team and Camden Mc Lellan of TBS Conversions Racing Team crossed the line fifth and sixth. While Bonacorsi did not finish the race.

In the second race, it was Osterhagen who took the holeshot and was leading Gwerder, Meuwissen, Toendel and Meico Vettik. Meanwhile Bonacorsi didn’t get off to the best start and was outside the top 20. Elzinga was also buried in the mid-pack with Braceras.

At the sharp end of the field though we saw Toendel pass Vettik and Osterhagen for the lead, while Osterhagen dropped two positions in the space of just a couple of corners.

Elzinga then passed Mc Lellan for ninth and continued his charge forward, as Bonacorsi moved into 16th.

Quentin Marc Prugnieres of 9MM Energy BUD Racing Kawasaki crashed out of fifth to eventually finish the race in 11th.

Toendel was looking comfortable in the lead as he was already 2.483 seconds ahead of Vettik, while Osterhagen was safe in third.

But it was Elzinga who was the hard charged as he passed Meuwissen for sixth and started to gain ground on Gwerder who was ahead. By the end of lap eight, we saw him move into fifth. Two laps later he passed Oliver but was just out of reach to get Osterhagen too.

Meanwhile Bonacorsi put in a sprint in the final few laps of the second heat and managed to get himself up to sixth place ahead of Gwerder, scoring valuable points after yesterday’s DNF.

In the end it was Toendel who won the race 4.412 seconds ahead of Vettik and Osterhagen. Meanwhile Elzinga was fourth just ahead of Oliver in fifth.

The 1-4 result gave Elzinga his first overall victory of 2022 and with that he secured the red plate going into round two of the series. Joining on the podium were the two Fantic Factory Team Maddii riders Cornelius Toendel and Haakon Osterhagen.

The next round of the EMX250 championship will take place in Portugal on the 2nd / 3rd of April.

Rick Elzinga: “First race was really good, and I really enjoyed racing here. The second race, I had some trouble in the first couple of laps and by then the front guys were already far ahead of me, so it was difficult to catch. But I think I did a good job, got the red plate and the winter prep really showed. Happy to be back on Yamaha and I am happy to be on the podium. Thanks to Yamaha and everybody back home”.