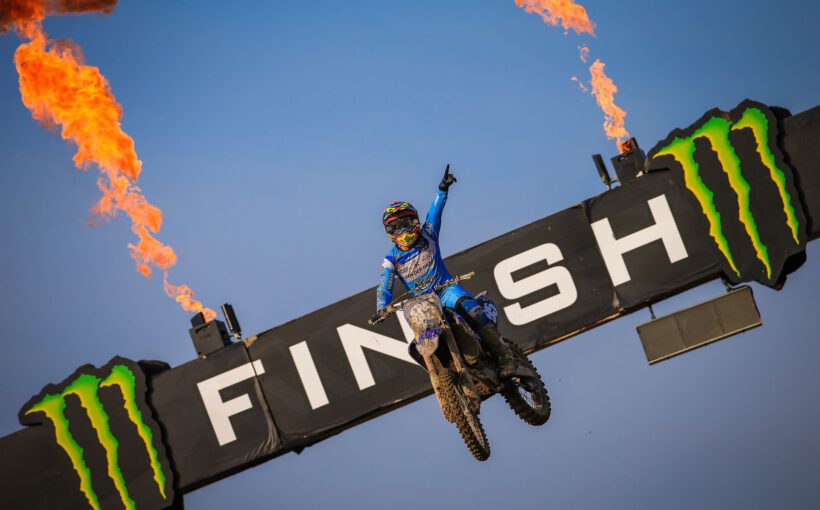 The opening round of the FIM Women’s Motocross World Championship in Lombardia has come to an end, with Ceres 71 Racing rider Nancy Van De Ven securing her 29th career podium with the overall round victory ahead of JK Racing Yamaha’s Lynn Valk and Honda 114 Motorsports’ Martine Hughes.

The defending World Champion, Courtney Duncan of Big Van World MTX Kawasaki had an unlucky start to her 2022 campaign as she placed sixth overall, following a tough second race.

As the gate dropped for WMX race one, it was Duncan who grabbed the holeshot ahead of Valk and Van De Ven.

Amandine Verstappen was another rider to get a good start and was right there with the leaders before slipping down to fifth as Martine Hughes of Honda 114 Motorsports went by.

Yamaha Racing 423 rider Larissa Papenmeier was among the few ladies who were not so lucky out of the gate, as she crossed the line on the opening lap down in 30th position and had a long way to come back.

After applying constant pressure, we saw Valk take over the lead from Duncan on the second lap. And a lap or so later she clocked the fastest lap time of the race and already had a nice 2.347 second gap.

Valk then continued her charge at the front as Duncan started to come under fire from Van De Ven and on lap five we saw the defending world champion slipped down another position.

By that point it was too late for Van De Ven to make a difference as Valk was already eight seconds ahead. In the end Valk crossed the finish line first, with Van De Ven second, Duncan third and Verstappen managing to get back into fourth after passing Hughes back. Meanwhile Papenmeier managed to come back to 11th in the end.

In race two, it was Papenmeier who grabbed the holeshot from Shana van der Vlist, Sandra Keller of SK Racing and Van De Ven. Though Van De Ven was quick to make some passes and get herself into second. She then pursued Papenmeier and after several attempts was able to get the job done and move into the lead on the lap one.

Duncan meanwhile was unlucky in the start and was among the few riders that crashed in the first corner on the start. By the end of lap one she was 26th.

At that point, race one winner, Valk was in fifth but was also quick to make passes as she got by both Elisa Galvagno and van der Vlist and was applying the pressure onto Papenmeier for second. She later made the pass.

Hughes was also looking strong in race two as she battled with van der Vlist for fourth. The Norwegian was able to make a pass stick and then set her sights on Papenmeier ahead.

By that point Van De Ven was already more than 3 seconds ahead, but Valk was able to bring the gap down by going purple in sector three and setting the fastest lap of the race.

As the race progressed, Duncan was fighting her way into the top 10 and after making a couple of more passes, she eventually finished in ninth place.

But back with the leaders, towards the closing stages of the race we saw Hughes continue her charge forward as she pushed Papenmeier down to fourth. By that point she was already too far behind the leaders so had to settle for third.

Papenmeier came under more fire in the closing stages, as she dropped to fifth, while van der Vlist move into fourth.

In the end it was Nancy Van De Ven who took her 17th career race win, as Valk finished second and Hughes was third.

A 2-1 result gave Van De Ven the upper hand over Valk’s 1-2, as she took to the top step of the podium and secured the red plate at the opening round of the Women’s Motocross World Championship. Second overall was Valk, meanwhile Hughes made her very first podium appearance on her WMX debut!

The next round of the Women’s Motocross World Championship will take place in Portugal on the 2nd / 3rd of April.

Nancy Van De Ven: “I’m so happy. I worked so hard in the last years. I had so much bad luck and setbacks and now finally since 2018 I win a Grand Prix and I win a race again and I am incredibly happy”