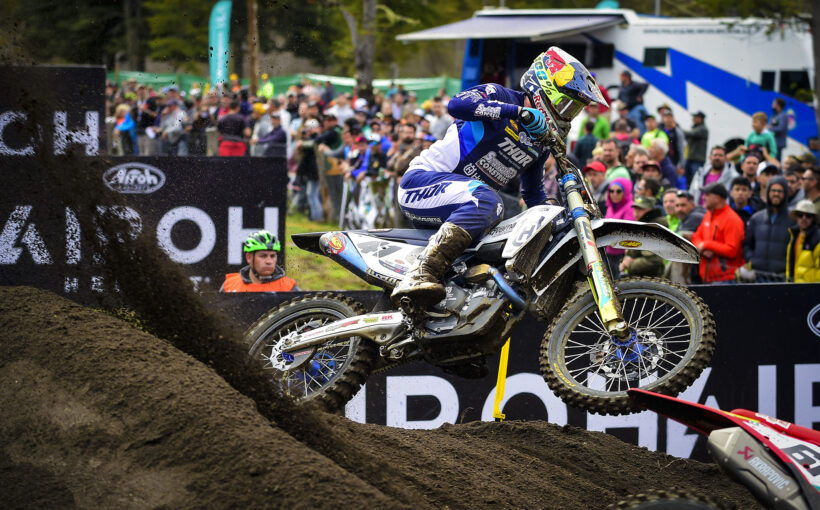 The day was full of action, with morning starting off with the free and time practice sessions that saw Team HRC’s Tim Gajser on pole for both, but this did not translate into a victory today, but showed that he had the raw speed to be up front tomorrow. Meanwhile in MX2, Nestaan Husqvarna Factory Racing MX2’s Kay de Wolf and Simon Längenfelder of Red Bull GasGas Factory Racing topped the charts in free and time practice and had a strong qualifying race too.

Aside from the exciting races, the atmosphere created by the huge crowd of Argentinian fans that lined the circuit made the day even more thrilling, with cheers of support heard from every area of the venue.

When the time came for MXGP qualifying race, it was Monster Energy Yamaha Factory Racing’s Glenn Coldenhoff who led his teammate, Jeremy Seewer. Henry Jacobi of JM Honda Racing also got off to a flying start but was quickly passed by Team HRC’s Tim Gajser, who then also passed Seewer for second. Standing Construct Husqvarna Factory Racing’s Pauls Jonass started in around sixth.

Before the end of the opening lap, F&H Kawasaki Racing’s Jed Beaton and Standing Construct Husqvarna Factory Racing’s Brian Bogers came together, with neither one of the riders continuing with the race. Beaton was unhurt but could not continue due to bike damage, while Bogers was left with a dislocated shoulder which was take care of in the medical centre at the venue.

On lap five, Seewer passed Gajser to move back into second, as Gajser struggled with a rear brake issue, while Coldenhoff continued to lead.

Gajser then became a target, as Red Bull GasGas Factory Racing’s Jorge Prado got by the Slovenian on lap six, with Gajser dropping two more spots the following lap as both Maxime Renaux of Monster Energy Yamaha Factory Racing and Thomas Kjer Olsen of Diga Procross KTM Racing got by. He eventually finished in seventh place.

In the final few laps, we saw a tight battle for the lead between the teammates, Coldenhoff and Seewer, with the Swiss moving into first place with four laps to go. But the battle for the first spot between the factory Yamaha riders played into the hands of Jonass who was able to catch both and charge for the win very quickly to be the new race leader on lap 12.

In the end Jonass claimed his first qualifying race win since 2018 and will start on pole in tomorrow’s races. Seewer finished second, with Prado third, as Coldenhoff faded to sixth, which meant that Renaux occupied fourth, with Olsen fifth.

Pauls Jonass: “I didn’t expect this at all. Obviously, I like this track a lot and always enjoy racing here, but as many know, since the middle of January I haven’t been on the bike so much and in Mantova my wound came open also; I had to make another surgery and just rode one time in between, so considering how much I have been on the bike this off-season, I cannot believe it, that it was possible. Before all the bad things started to happen I was feeling good on the bike and now I will just take all the positives and enjoy the racing, like today I enjoyed the track a lot, this morning we made some small change to the bike because in the off-season we didn’t test a lot and now I just need the bike time, then I think I can be up front every single GP. It’s a nice feeling and I need to bring this to tomorrow”

In MX2 qualifying, it was Monster Energy Yamaha Factory Racing’s Jago Geerts who got a good jump out of the gate, but it was Red Bull KTM Factory Racing’s Tom Vialle who took the holeshot and led the way. Though it did not last long as Geerts was able to get around him before the end of the lap.

Nestaan Husqvarna Factory Racing’s Kay de Wolf started well but was passed by F&H Kawasaki Racing’s Kevin Horgmo who also got by Vialle for second and was looking strong. But by the end of the lap, he crashed and dropped down to 18th. He finished 12th in the end.

SM Action Racing Team YUASA Battery rider Andrea Adamo was moving up the top 10 but caught the rear wheel of Gianluca Facchetti of KTM Beddini MX2 and went down. He did not finish the race, while Facchetti placed 10th.

Red Bull GasGas Factory Racing’s Mattia Guadagnini was looking to re-group as he got by Facchetti on lap six but did not make further progress as Mikkel Haarup of Big Van World MTX Kawasaki passed him and also Längenfelder to ultimately finish fourth.

On lap nine, we saw Nestaan Husqvarna Factory Racing’s Roan Van de Moosdijk crash big as he went out of fourth. He did not re-join the race and made a visit to the medical centre with his condition for tomorrow unknown.

In the end, Geerts claimed a back-to-back qualifying race victory while under pressure from Vialle throughout the heat, as the Frenchman crossed the line 4.703 seconds behind him. Third was de Wolf with Haarup and Längenfelder fourth and fifth.

Jago Geerts: “I’m really happy. I got a good start, and we were struggling with the starts in the first two rounds, so I’m really happy with that. The riding felt good, I didn’t take too many risks, the jumps were pretty sketchy but overall I am feeling good and feeling ready for tomorrow. Hopefully I will get two good starts and then we will see”.