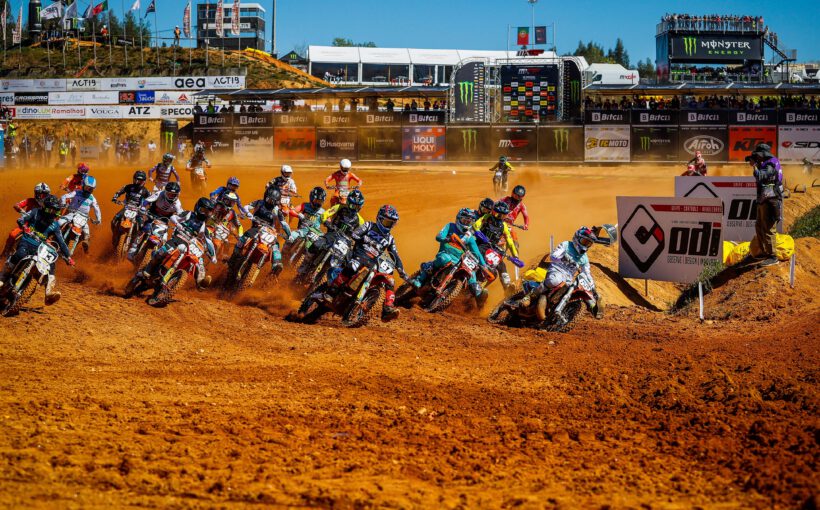 Elzinga Unbeatable at EMX250 Round 2 in Portugal.

The second round of the EMX250 Championship has concluded in Agueda, Portugal. It was a fantatsic day for Hutten Metaal Yamaha Racing’s Rick Elzinga who claimed maximum points and celebrated his first 1-1 of the 2022 season, as well as extending his championship lead over Fantic Factory Team Maddii’s Cornelius Toendel.

In EMX250 race one, it was Meico Vettik with a great start ahead of Elzinga and Yago Martinez, as a few riders hit the gate. Martinez then crashed, as Elzinga closed in on Vettik for the lead and by the end of the lap took control of the race.

Elzinga then led Vettik, Camden Mc Lellan of TBS Conversion Racing Team, Lucas Coenen of Jumbo Husqvarna BT Racing and Eddie Wade of 9MM Energy Drink BUD Racing, though Wade came under fire from Mc Lellan and Marcel Stauffer as both riders went by on the Brit. He then lost more positions and went down to 10th. He eventually finished 16th.

Mc Lellan then put on a charge for Vettik and on lap eight the South African got by for second and later so did Coenen as Vettik eventually placed 10th.

In race two, it was Hakon Osterhagen of Fantic Factory Team Maddii who grabbed the holeshot from Sacha Coenen of Jumbo Husqvarna BT Racing, Vettik, Elzinga and Toendel as Coenen crashed hard with a couple of other riders.

There was an intense battle inside the top five as Andrea Bonacorsi of Hutten Metaal Yamaha Racing was caught out by Guillem Farres and Oriol Oliver of WZ Racing Team and lost two spots within a lap.

Sacha Coenen came into pitlane after that second turn crash, but went back out to finish the race 22nd, just outside of the points. Meanwhile his brother had a much stronger race.

Elzinga then took the lead on lap three, as Osterhagen worked hard to keep Farres behind him. Meanwhile Toendel was charging forward and by lap six was second ahead of Vettik, while Lucas Coenen made his way into sixth.

Bonacorsi then slipped back to 11th as Farres crashed out of fifth but managed to get going quickly and lost only four positions.

In the final stages of the race Lucas Coenen was able to make some good passes and as the chequered flag fell, it was Elzinga who took the victory, 4.776 seconds ahead of Toendel and Coenen who fought back to third.

A clean 1-1 result gave Elzinga his second back-to-back victory as Coenen celebrated his first podium of the season in second ahead of Toendel who was third.

Elzinga extends his championship lead to 93 points, as Toendel remains second with 77 while Oliver is third with 62 points. The next round of the EMX250 championship will take place in Maggiora, Italy on the 7th and 8th of May.

Rick Elzinga: “The first race was just amazing. I controlled it and felt like it was a training session, was just doing my laps and was just really comfortable. In the second race, again comfortable, but had to push until the end because Cornelius was quite close, but I held a gap consistently so that he couldn’t get the pass. It’s amazing to get that 1-1, I can’t thank everyone behind me enough, the hard work is paying off and I just love it!”.