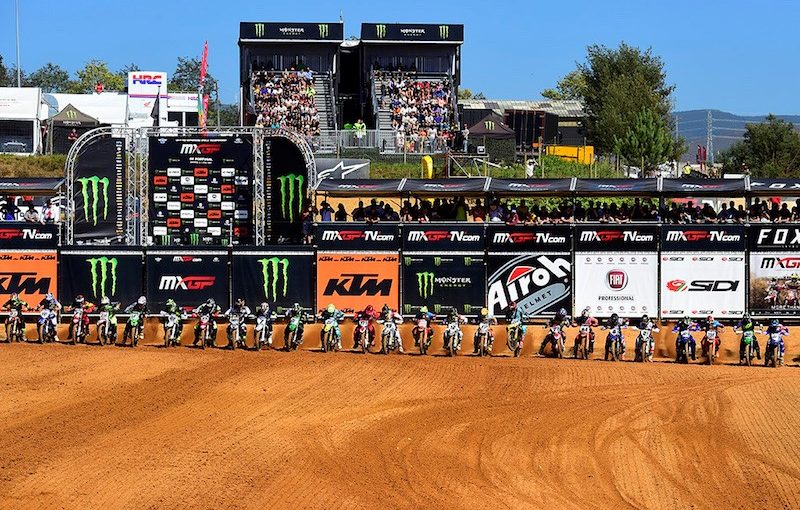 Just days after an amazing weekend in Italy MXGP has arrived to the 5th round of the 2018 season this weekend at the Agueda circuit for the MXGP of Portugal! The Portuguese GP returned to the calendar last year and provided excellent racing with Antonio Cairoli besting his Red Bull KTM Factory Racing teammate Jeffrey Herlings as Arminas Jasikonis took his first and only MXGP podium.

This weekend’s racing will again be one to remember with Cairoli looking to win again especially after just suffering a defeat at his home GP against the strong stars of Herlings. In addition wet weather the past days could make the circuit challenging and potentially lead to a new winner in both the MXGP and MX2 classes.

Not only will MXGP and MX2 race this time out but so too will the European 250 Motocross championship along with the second Women’s Motocross World Championship race of the season. In the EMX250 class Pierre Goupillon leads the points after winning the opening round of the series at Redsand but Tom Vialle also showed speed along with Mel Pocock and Martin Barr who each took a race win in Spain. In the WMX Championship Larissa Papenmeier has the red plate after winning her first race in 8 years at last weekend season opener in Trentino. Joining Papenmeier in Portugal will be Courtney Duncan, Nancy van de Ven, and Kiara Fontanesi among others.

In MXGP Red Bull KTM Factory Racing’s Jeffrey Herlings comes off an emphatic win against his teammate and rival Antonio Cairoli at Trentino. Herlings’ win on Italian soil not only has given him bragging rights but also the championship leader’s red plate.

Last year Cairoli was the better of the pair on the Agueda circuit and of the 11 times he raced here in his career 5 were victorious, 5 more were podium finishes, and his worst result was 5th way back in 2004. Cairoli remains focused on the long term goal of the championship and has the extra benefit this weekend of Herlings not being a particularly strong mud rider in a time that may require just such a skill.

Monster Energy Kawasaki Racing Team’s Clement Desalle who had his season best result of 2nd last week will look to improve on his 8th place from 2017. Desalle has however won the MXGP of Portugal 3 times in his career.

Wilvo Yamaha Official MXGP’s Jeremy Seewer is last year’s MX2 winner from Portugal and so far in his rookie MXGP season he has been impressive as he sits 8th in points.

Honda Redmoto Assomotor’s Arminas Jasikonis has struggled in 2018 thus far. His struggles are likely due to his late 2017 injury and lack of prep on a team. Nevertheless Jasikonis is improving week by week and last year took his 1st and only MXGP podium of his career so far.

Also notable is Portugal’s Rui Goncalves’ return from retirement this weekend to race his home GP.

Red Bull KTM Factory Racing’s Pauls Jonass suffered his first defeat of the season at the hands of his teammate Jorge Prado last week in Trentino. Jonass who finished second in Agueda last year to Jeremy Seewer will be looking to correct his starts after missing out the Holeshot last week.

Jorge Prado on the other hand will look to keep his momentum from Trentino and forget his 2017 MXGP of Portugal where he struggled in the heat scoring 24th in race 1 and not starting race 2. While a repeat is highly unlikely it will be interesting to see how performs.

Others such as Rockstar Energy Husqvarna Factory Racing’s Thomas Covington and STC Husqvarna’s Henry Jacobi are trying to crash the KTM party. Jacobi had his career best finish and first podium last round.

While America’s Thomas Covington became the first non KTM rider to win a race in the MX2 category of 2018 at Trentino, he is just one of many potential winners in Portugal. Covington does have fond memories from Agueda as he took third here in 2017.

Covington’s Teammate, Rockstar Energy Husqvarna Factory Racing’s Thomas Kjer Olsen, has been one of the most consistent riders of 2018 finishing on the podium 3 of 4 races with the only exception being 8th last weekend. Olsen finished 4th in Agueda last year.

The 2 British riders, Kemea Yamaha Official MX Team’s Ben Watson and Hitachi KTM UK’s Conrad Mewse are currently 4th and 5th in the championship. This weekend we could see one if not both of them with breakthrough results especially in the wet conditions which Brits commonly excel in.