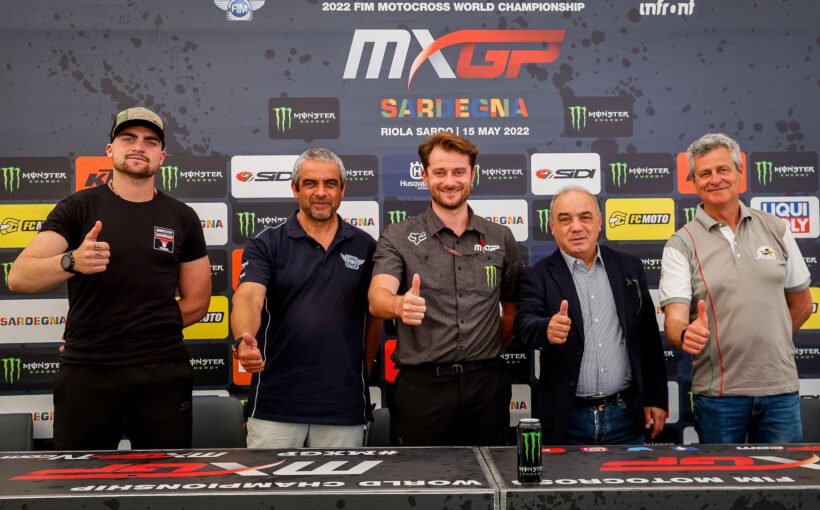 Excitement Builds for the MXGP of Sardegna After the Official Opening Press Conference.

Excitement begins to build for the second edition of the MXGP of Sardegna following the opening press conference which took place in the media center of the Crossodromo Le Dune in Riola Sardo.

The press conference welcomed everybody to Sardinia for the second time in the FIM Motocross World Championship history as round eight is set to get underway this weekend.

Last year’s Sardinian Grand Prix was a huge success with intense racing in both MXGP and MX2 categories as Jeffrey Herlings and Tom Vialle declared themselves the first winners in Riola Sardo.

Infront Moto Racing is excited to return to Riola Sardo and see what the MXGP of Sardegna has in store this weekend.

Infront Moto Racing CEO David Luongo: “It is a big pleasure to be here again for the second time. The event will be streamed worldwide so people from 180 countries will enjoy the races and will get to know the paradisiac island of Sardinia. The track itself is really peculiar with this type of sand and the organizer worked a lot to improve with the suggestion we gave to them. I wish to thank the FIM, the Organizer and the Region of Sardegna, especially the Region Tourism Ministry led by Giovanni Chessa for their support to make it happen. I hope to come here for many more years and have the Championship again in this beautiful location”.

FIM/CMS Director Antonio Alia Portela: “When we came last year for the first time it was like a bet for us because nobody knew what to expect; the outcome was incredible and I’m sure this year we’ll have much more. Before this conference I was speaking with Mr. Chessa, David and the organizer and we all know that this will be a long-term project and all the things we have done in these two years will continue for many more. Speaking about the technical side the weekend will be full of races with the EMX250 and the WMX after of course the MXGP and MX2 classes; the track will need to be perfect, but I have no doubt about that to be honest so let’s enjoy the races”.

Sardinia Region Minister of Tourism Giovanni Chessa: “First of all, I want to thank Infront Moto Racing and the organizer that brought the FIM Motocross World Championship here in the beautiful Sardegna another time after the big success of last season. Our goal is to invest for the future of the region. We are hosting many international events as part of the biggest project that I started with my ministry when Sardinia was presented as Island of the Sport. That was a good strategy as the international events gave the chance to Sardegna to be seen all over the world and to welcome people to the island all year long.”

President of the Motoclub Le Dune Fulvio Maiorca: “I want to thank everybody who helped to make this happen. Even if we are a small Motoclub we are putting so much effort in this race; having the World Championship here is something that make us proud and is also a big push for the track. Besides to have such event here helps also the area because when the people come here, they fall in love with this place and as Mr. Chessa said hopefully they’ll come back again.“

SM Action Racing Team YUASA Battery rider Alberto Forato: “It’s been a long time that I’m coming here to train during the winter so I feel like home; every year I go to Riola Sardo for training and being back for a race is a nice feeling. The track is very technical, it will be challenging for everybody but I’m sure that we’ll have a great event also this year.“