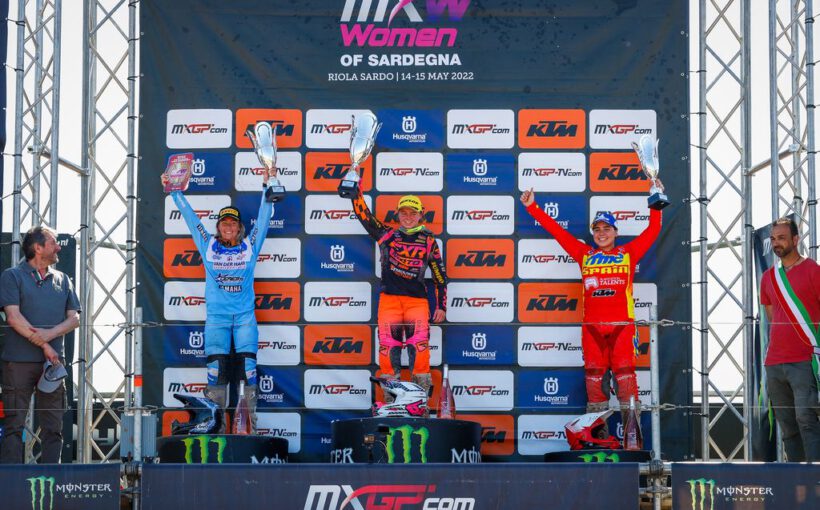 The third round of the FIM Women’s Motocross World Championship has concluded in Riola Sardo, with Shana van der Vlist securing the overall round of Sardegna victory and celebrating her first trip to the top of the box in 2022.

The WMX racing saw plenty of action, with intense battles between championship rivals Nancy Van De Ven of Ceres 71 Racing and JK Yamaha Racing’s Lynn Valk, who ultimately got very unlucky with a DNF in race two and lost the red plate.

In the first WMX race of the weekend, it was Nancy Van De Ven of Ceres 71 Racing who grabbed the holeshot as she briefly led JK Yamaha Racing’s Lynn Valk and Shana van der Vlist. Though Valk was quick to find her way into the lead as Van De Ven dropped to third as van der Vlist found her way through too.

van der Vlist then set the fastest lap of the race as she looked to close in on Valk, while Van De Ven began to lose ground to the two ladies ahead. The Yamaha rider then crashed on lap four and dropped back to 10th, though was determined to take back as many points as possible as she got herself into eighth shortly after.

On lap five, van der Vlist took the lead from Valk and then got her head down and managed to pull away as she looked unaffected by the heat and the sandy conditions.

Britt Jans-Beken was also making some moves as she got herself up two positions in less than half a lap to fifth. In the latter stages of the race, she found herself in a close battle for fourth with Verstappen and Papenmeier, though crashed and dropped back to seventh.

In the end, van der Vlist won with a 22.087 second advantage over Valk and Guillen, Papenmeier and Verstappen.

In the second heat, it was once again Van De Ven with the holeshot ahead of van der Vlist and Verstappen. Meanwhile, Valk started down in around 10th.

In the opening stages, van der Vlist quickly found her way into second as she focused on the leader ahead, all while Verstappen dropped back to fifth.

A few moments later Valk and Verstappen made contact as Verstappen went down big. The Kawasaki rider received medical attention immediately as Valk was forced to DNF due to bike damage from the collision and as a result lost valuable championship points and the red plate.

Guillen was running strong in third, on her way to her first WMX podium ever. As van der Vlist was setting herself up for making a pass on Van De Ven. The KTM rider made several attempts as we watched the pair battle it out in the closing stages of the race, though Van De Ven was able to keep her cool and win her second race of the season. van der Vlist was second ahead of Guillen, Martine Hughes of Honda114 Motorsports and Jans-Beken.

With a 1-2 score, van der Vlist took her first overall victory of the season, with Van De Ven second on the box with a 6-1 scorecard ahead of Guillen who went 3-3 to secure her first WMX podium.

Valk’s DNF in race two proved to be costly as she now drops to second in the standings while Van De Ven leads with a 12-point advantage. While van der Vlist is third.

The next round of the Women’s Motocross World Championship will take place in intu Xanadú – Arroyomolinos for the round of Spain on the 28th and 29th of May.

Shana van der Vlist: “It was the best race of the season and also for me the best track. I’m really happy that I could make up some points and I’m looking forward to the next race”.