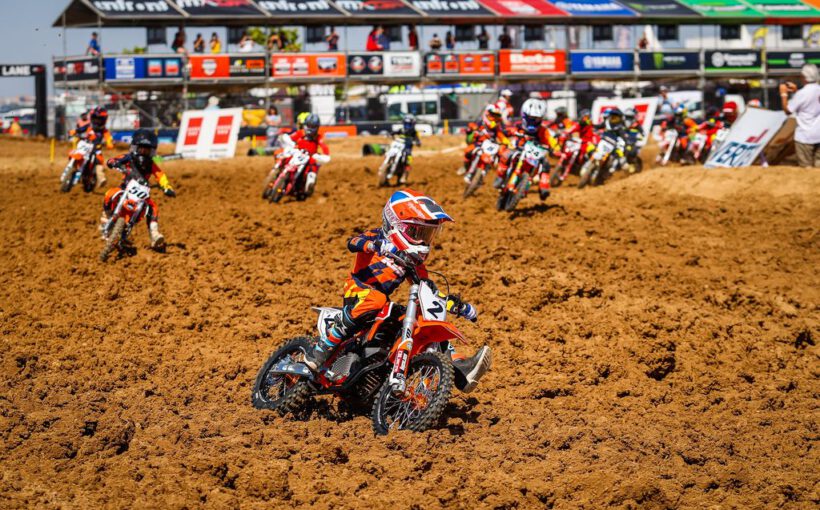 Timoteï Cez Wins Round One of the 2022 Junior e-Motocross Series.

Young French rider Timoteï Cez has emerged victorious at the opening round of the 2022 European Junior e-Motocross Series in Spain. Racing to victory under the Spanish sunshine in race one, the KTM SX-E 5 mounted rider claimed third in race two to secure overall victory. Rounding out an all KTM overall podium were Austria’s Elias Eder in second, with Logan Liberal Rodas, racing in front of an enthusiastic home crowd, placing third.

The spectacular intu Xanadú circuit in Spain was the beautiful setting for round one of the 2022 European Junior e-Motocross Series. After an early qualifying session on Saturday morning to determine gate pick for both races, the strong line-up of excited young riders took to the start line later in the day for the highly anticipated opening race of the season.

After the gate dropped in race one, second-fastest qualifier Timoteï Cez led every lap to deliver an impressive start to finish victory. Challenging him for the lead throughout the seven-minute-plus-one-lap race was Great Britain’s Cameron Berry (KTM) who crossed the finish line just under one second behind the Frenchman for second. Berry was closely followed home by Spain’s Logan Liberal Rodas in third with the fastest qualifier, Elias Eder, fourth.

Fast starting Berry led the opening lap of the second race before Eder made the pass for the lead on lap two. From there, the Austrian then fended off multiple challenges from Liberal Rodas, who moved past Berry on lap two, throughout the remainder of the race to secure victory with the Spaniard just two seconds adrift at the finish. Race one winner, Cez, set the fastest lap of the race on his way to securing third and with it claimed overall victory ahead of Eder with Liberal Rodas in third.

On top of what was an exciting first round of racing that saw all competitors race on the same, but mildly revised circuit as the MXGP riders, round one was full of experiences for all involved. A track walk on Friday with Joel Smets (Red Bull KTM Factory Racing Team Manager) and MXGP rider Mattia Guadagnini (Red Bull GASGAS Factory Racing) made for an exciting and educational start to the weekend. The young riders also enjoyed a tour of the MXGP paddock with exclusive access to the factory racing teams of KTM, Husqvarna, and GASGAS where they met all their racing heroes.

The five-round 2022 European Junior e-Motocross Series continues next weekend at the Monster Energy MXGP of France on June 4-5.

Timoteï Cez: “My weekend in Spain was really good! I’m really proud of what I have achieved this weekend and for the next round I will have the red plate so my bike will look super cool! There was such a big crowd here and it was so much fun racing in front of them. This race was such a cool experience and I can’t wait for the rest of the races. I have to thank my parents and sponsors for getting me here and the goal for the rest of the season is to keep hold of the red plate.”