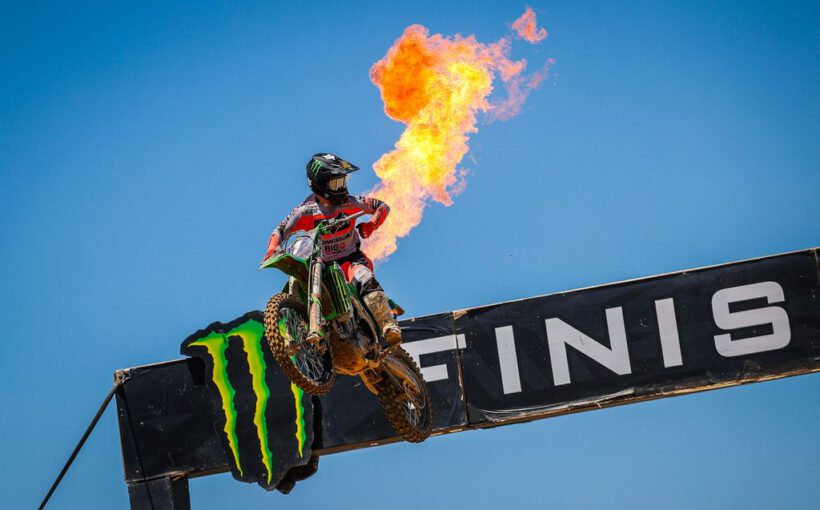 Duncan Makes Stellar Comeback and Wins WMX Round of Spain.

The penultimate round of the FIM Women’s Motocross World Championship saw Big Van World MTX Kawasaki’s Courtney Duncan make a stellar comeback from injury to secure the overall victory at the round of Spain.

Duncan was challenged by home hero Daniela Guillen of RFME WMX Team who celebrated with a race victory and a podium in front of the Spanish crowd, while championship leader Nancy Van De Ven of Ceres 71 Racing finished third overall and extended her points lead to 25 points.

In WMX Race one, it was Ceres 71 Racing’s Nancy Van De Ven who grabbed the holeshot as Big Van World MTX Kawasaki’s Courtney Duncan fought her way quickly into second place. Home hero, Daniela Guillen of the RFME WMX Team was right there too looking to stick with the leading ladies.

Amadine Verstappen started well among the leaders before crashing out of fifth. She got going again in 23rd on the opening lap.

Guillen then began to close in on Duncan as she made several attempts to get around the New Zealander. She was close on a couple of occasions, but small mistakes made it difficult to secure the position.

Further down the order, Larissa Papenmeier of Yamaha Racing 423 was looking fast in fourth as she set the fastest lap of the race on several occasions but could not get close in enough to the top three as Guillen continued to apply the pressure onto Duncan.

At one stage of the race, both Duncan and Guillen, who were second and third, set an identical lap time of 2:08.337, which at the time was the fastest lap of the race. The duo didn’t pull away from Papenmeier too much, as the German responded straight after with another fast lap.

As the race continued, Duncan and Guillen edged closer to the race leader Van De Ven as the gap came down to just 0.715. Moments later Van De Ven made a mistake which allowed Duncan to use this to the advantage and dive down the inside of the Dutch rider. On lap 7 we saw a change for the lead.

Duncan got her head down as she pulled away from the rest of the field. In the end Duncan won race one with a 4.241 advantage over Van De Ven and Guillen. Papenmeier remained fourth ahead of Giorgia Balsigh of Ceres 71 Racing who finished fifth.

In race two, it was Duncan who grabbed the holeshot as Papenmeier followed closely in second, while Gabriela Seisdedos of RFME WMX Team was right there in third.

Shana van der Vlist went down in the first turn and was left with a lot of work on her hands as she got going again in last. The Dutch rider was eventually able to fight back to 13th.

Sandra Keller of Vogelsang Powersports then lost three positions to Van De Ven, Guillen and Sara Andersen as she dropped down to seventh, while Amadine Verstappen worked her way up the order and began to apply the pressure onto Andersen.

Further up the order, Papenmeier was not letting Duncan run away with it, as she kept the Kawasaki rider within a close distance. But it was Guillen who was on fire, as she stepped it up a gear after setting the fastest lap and passing Van De Ven for third on lap three.

It took the Spanish rider only a lap to then get around Papenmeier for second and before we knew it, she was on the heels of Duncan. By the sixth lap, Guillen was the new race leader which sent the Spanish crowd crazy!

After finding her way into the lead, Guillen got her head down and opened up a gap to Duncan immediately. Further behind them, Van De Ven began to plan her attack onto Papenmeier which she executed with two laps to go as she moved into third.

In the end, Guillen won the second race with a 8.176 second advantage over Duncan and Van De Ven who was third. Papenmeier was forced to settle for fourth, while JK Yamaha Racing’s Lynn Valk fought back to fifth.

A 1-2 result gave Duncan the overall win on her first race back from injury, as Guillen celebrated on the second step of the box ahead of Van De Ven.

With one round remaining, Van De Ven leads Valk by 25 points, while van der Vlist is third in the points standings.

Courtney Duncan: “I think I can be proud with this weekend. Obviously, as you said it was my first race in a long time, three months, so I’m still a little bit off and a little bit rusty. But we’re here and it’s an onwards battle from here. Huge thanks to everyone who supports me and I’m just so stoked to fly the Kiwi flag today!”.