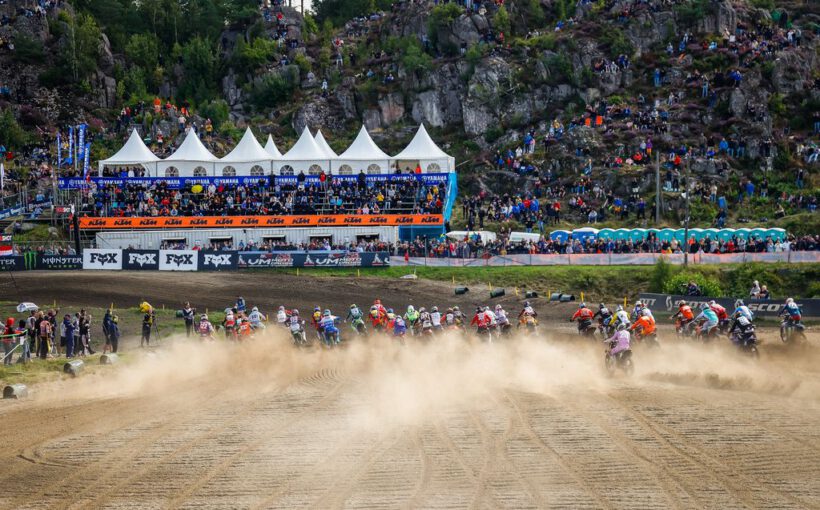 Osterhagen and Van Erp Top the EMX Podium in Sweden.

Rounds eight of the EMX250 and EMX125 Presented by FMF Racing have concluded at the round of Sweden in Uddevalla, with Fantic Factory Team Maddii’s Haakon Osterhagen securing his first overall victory in the EMX250 class, while Yamaha Europe EMX125 MJC’s Ivano Van Erp celebrated his second visit to the top step of the podium!

In the first EMX250 race of the weekend, it was Fantic Factory Team Maddii’s Haakon Osterhagen who took the holeshot while Hutten Metaal Yamaha Racing’s Andrea Bonacorsi got caught up in a big crash, and did not carry on with the race, as his teammate Rick Elzinga also had a tough start to his race.

Elzinga began his charge towards the front pretty urgently as he entered the top 20 by the end of the first lap. Though at the sharp end of the field Osterhagen was coming under immense pressure from L. Coenen who was searching for every opportunity to pass the Norwegian. But Osterhagen was quick to respond with the fastest lap of the race, to open up the gap to 1.605 seconds as L. Coenen began to make mistakes.

The race took a turn for the worst for the title hopeful Toendel who struggled to fire up his Fantic machine to carry on with the race. Despite his best efforts, he was forced to DNF and as a result, lost valuable championship points to Elzinga.

L. Coenen was the next rider to suffer a mechanical problem after a broken chain forced him out of second position and allowed Osterhagen to get comfortable in first place. Coenen did not finish the race.

Both Prugnieres and McLellan were on a charge in the final stages of the race as both got by S. Coenen to move up to third and fourth and continued to push forward until they caught onto the rear wheel of Braceras who was 11.249 seconds behind the leader Osterhagen.

Further down the order, Elzinga was already inside the top 10 and eventually managed to finish 9th.

Osterhagen ended up winning the race ahead of Prugnieres who held off McLellan in the final laps, as Yago Martinez managed to work his way up to fourth ahead of Braceras.

In the second race, it was again Osterhagen who was the leading rider into the first turn, though was quickly passed by L. Coenen after making a mistake. Meico Vettik start well before dropping a few positions which allowed Braceras, Toendel and Elzinga through.

Braceras then made a mistake and dropped down to seventh place, as Elzinga began to apply the pressure onto Prugnieres, while Martinez was also pushing from behind.

Braceras then crashed again and got going outside the top 20 and eventually finished in 17th.

Osterhagen was pushing L. Coenen in the opening stages but small mistakes began to creep in and the Belgian was able to open up the gap to 4.591 seconds. While further down, Prugnieres was chasing down Toendel for third. The Frenchman pushed hard and made a mistake which sent him off the track, though he was able to get back into the swing of things and make the pass stick on lap 11.

Elzinga was next to go after the Norwegian and managed to pass him a lap later as McLellan closed in on Martinez as the two battled for the final spot on the podium. Eventually, McLellan was able to get it done and move into sixth.

In the end, L. Coenen was the race winner with a strong 9.627 second lead over Osterhagen, Prugnieres, Elzinga and Toendel. A 1-2 result gave Osterhagen the overall win, his first ever in the EMX250 class, while a solid 3-3 result put Prugnieres second on the box ahead of McLellan who celebrated his first podium finish.

Two rounds remain of the EMX250 Championship and Elzinga continues to lead over Toendel by 44 points, while L. Coenen is third.

Haakon Osterhagen: “The weekend has been amazing. The feeling on the bike was superb and I liked the track. We can basically say that this is my home race, it’s so close to my home. I just want to thank the team, my friends and family for supporting me and being here. Feels so good to finally win and to do it in front of my family and friends”.

In race one of the EMX125 Presented by FMF Racing category, it was Laban Alm who took the holeshot and was the leading rider ahead of Matteo Luigi Russi of Tech 32, Maximillian Werner of Diga Procross KTM Racing, Ferruccio Zanchi of Yamaha Europe EMX125 MJC and Linus Persson.

Early on in the first lap, Ivano Van Erp of Yamaha Europe EMX125 MJC got himself up to sixth place, while Werner dropped down to 10th.

Championship leader, Cas Valk of Fantic Factory Team Maddii had a tough start to the race by the fourth lap was already inside the top 10 and pushing further.

Russi then clocked the fastest lap of the race as he passed Alm at the very end of the fourth lap, while Van Erp took fourth from Mads Fredsoe and moments after also passed Zanchi to move up to third and by the eighth lap Van Erp was the race leader after Russi crashed.

Van Erp was looking to get comfortable in first place, though could not afford to relax as Janis Martins Reisulis fought his way through the pack and was putting on a charge for the leader.

Towards the closing stages of the race, the pair battled closely with J, Reisulis managing to pass Van Erp. The Latvian managed two laps in the lead before he crashed which allowed Van Erp back into the driving seat, as the KTM rider got going again in fourth ahead of Valk.

In the end, Van Erp won the race 6.599 seconds ahead of Zanchi, Alm, J. Reisulis and Valk.

In race two, J. Reisulis took the holeshot ahead of Fantic Factory Team Maddii’s Alexis Fueri, Werner, Van Erp and Zanchi. Valk started in around the top 10, which once again left him with a lot of work to do if he wanted to secure the title early.

J. Reisulis set the fastest lap time of the race as he extended his lead to 4.646 over Fueri. While Van Erp began to push Werner for third. Several corners later, he was able to make it stick and move into third.

Further down the order, K. Reisulis was making progress as he caught onto Alm and passed him for sixth, with Valk doing the same shortly after.

Zanchi then crashed out of fifth and dropped back to 10th which allowed Valk through as the Dutchman pushed to catch K. Reisulis ahead. At the same time, K. Reisulis was looking to edge closer to Van Erp. Valk made several attempts to pass K. Reisulis with the battle carrying on until the chequered flag. The Latvian was able to maintain his position and keep the Dutchman at bay.

J. Reisulis won the race ahead of Fueri who had Van Erp applying the pressure in the final lap. K. Reisulis finished fourth ahead of Valk.

A race win and third gave Van Erp the overall victory ahead of J. Reisulis and Fueri who stood on the third step of the podium. Despite not being on the podium, Valk leads the championship into the final round of the series which will head to Finland and holds a 48-point advantage over his closest rival and teammate Fueri, while K. Reisulis is third.

Ivano Van Erp: „I took a good start in the second race, I felt good yesterday and today on the track. Yesterday I finished first, today I finished third which means I win the overall, I hope I can do this again in Finland because the bike is really good. I want to thank everybody who is working on the bike and staying behind me, thank you, everybody!“.