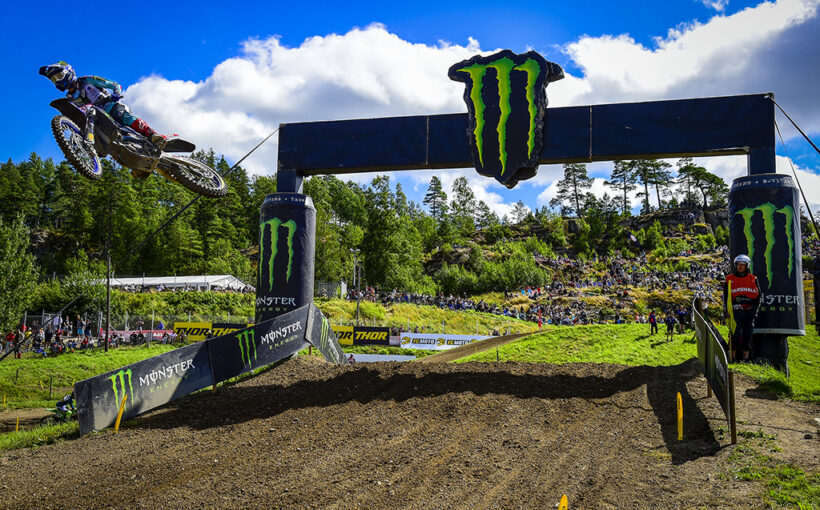 The first day of racing for the 15th round of the FIM Motocross World Championship in Uddevalla has concluded, with Team HRC’s Mitch Evans and Monster Energy Yamaha Factory Racing’s Jago Geerts taking victories in the MXGP and MX2 qualifying heats which puts them on pole for tomorrow’s main action at the MXGP of Sweden.

The day began with the practice sessions, along with an impressive air show which was the perfect opener for the first EMX250 and EMX125 Presented by FMF Racing heats that were won by Fantic Factory Team Maddii’s Hakon Osterhagen and Ivano Van Erp of Yamaha EMX125 MJC.

In the MXGP qualifying race, it was Monster Energy Yamaha Factory Racing’s Jeremy Seewer who took the holeshot ahead of Team HRC’s Mitch Evans and Tim Gajser. Evans wasted no time to pass Seewer on the opening lap, as Gajser also went by.

Soon after, Seewer lost another position to Calvin Vlaanderen of Gebben Van Venrooy Yamaha Racing who squeezed by the Swiss to take away third place.

Jonass then crashed out of sixth, while further down the field F&H Kawasaki Racing’s Jed Beaton also went down.

Prado passed Coldenhoff on lap four, as Monster Energy Yamaha Factory Racing’s Maxime Renaux got by Fernandez, who fought back immediately as the two battled closely. After several more attempts, Renaux was able to lock in the position and eventually finished in eighth.

At the top end of the field, Evans was looking relaxed and in control, as he led Gajser by 2.610 seconds, with Vlaanderen, Seewer and Kawasaki Racing Team MXGP’s Romain Febvre behind.

In the end, Evans was able to secure his first qualifying race win in MXGP ahead of Gajser and Vlaanderen. Febvre crossed the line fourth ahead of Prado, while Seewer dropped a few positions in the final four laps of the race to finish sixth.

Mitch Evans: “Yeah, it’s good to be back. For a win anyway, for the first time. But yeah, I felt good all day. Right from the beginning, we just played around with the bike set-up a little bit and we were solid for qualifying. When I was doing my laps in the qualifying race, I just felt like I could do that the whole race kind of thing. And yeah, with a good start, I made my way to the front really quickly, and then just kind of managed the race. And I really, for the first time ever, in a race, I felt like I was just training, and I felt really comfortable, so I’m looking forward to doing the same tomorrow”.

On the opening lap, Haarup dropped to sixth as Rubini got by Vialle and set his sights on Pancar ahead in second. Pancar, Rubini and Vialle were locked in a close battle. Rubini was pushing hard but ended up crashing hard and did not carry on with the race as he received medical attention.

Pancar continued in second and was looking good, as further down Haarup got by F&H Kawasaki’s Kevin Horgmo for sixth. He had Nestaan Husqvarna Factory Racing’s Roan van de Moosdijk and Red Bull GasGas Factory Racing’s Simon Längenfelder ahead.

Haarup looked fast as he also set the fastest lap of the race while running in sixth place.

Längenfelder began to close in on Vialle and made several attempts to get by the Frenchman but always came up short. The two caught onto the back of Pancar who was beginning to fade and with just three laps to go, Pancar dropped from second to third. The Slovenian was also passed by Haarup and eventually finished fifth which is still his season best.

In the end, Geerts won the qualifying race for the sixth time this season and will line up first for tomorrow’s races ahead of Vialle, Längenfelder, Haarup and Pancar.

Jago Geerts: “Yeah, I’m happy about qualifying, I took the holeshot so that was really nice. And then I just had good pace and the whole race and was feeling good on the track. So I will try to do the same tomorrow and we will see”.