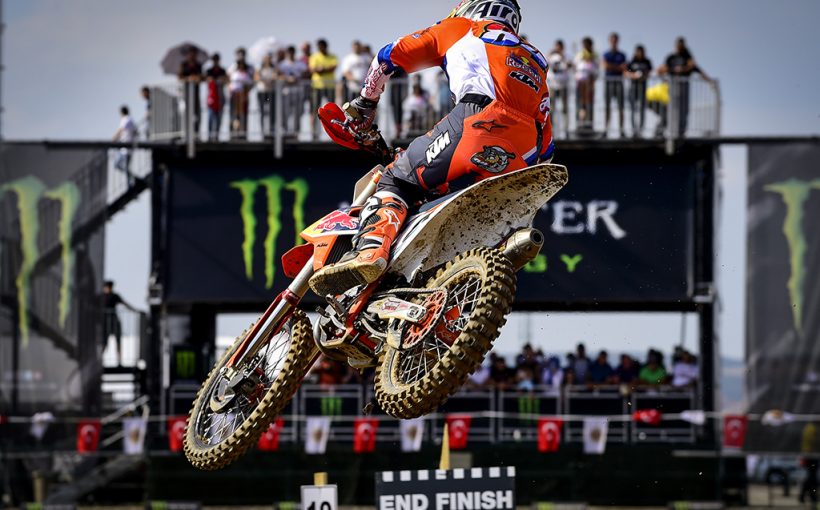 Qualifying day at the MXGP of Turkey for the 18th round this season has wrapped up. The new circuit of Afyon led to some of the highest race speeds this season but no one topped the pace of Red Bull KTM Factory Racing’s Jeffrey Herlings and Pauls Jonass as the took pole position in their respective categories.

The Afyon circuit was previously unknown which challenged riders and teams to adapt quickly. The welcoming atmosphere created by the Turkish Motorcycling Federation and the organization has been beyond expectation: Top level facilities and amazing hospitality combined today to provide the thousands of attendees a truly unique experience from the paddock events to concerts and autograph sessions ultimately leading up to world class racing.

Red Bull KTM Factory Racing’s Jeffrey Herlings has started his Turkish trip just as he has many others so far this season. Today’s time practice session top time slotted him with the first gate pack. One advantage led to another with his gate pick giving him the holeshot and lead.

Behind Herlings off the start was Team HRC’s Tim Gajser and the lone Monster Energy Yamaha Factory MXGP rider Jeremy Van Horebeek as Romain Febvre was taken for medical evaluation after a crash in the time practice session. Febvre suffered a concussion in the accident and was taken to hospital for further medical examination. Positive feedback from the hospital showed no serious injury occurred, the former world champion will however sit out racing tomorrow.

Running in 4th place was Red Bull KTM Factory Racing’s Glenn Coldenhoff in one of his strongest performances this season. The other Red Bull KTM belonging to Antonio Cairoli was back in 10th fighting with Standing Construct KTM Racing Team’s Valentin Guillod to take 8 then continuing on to Guillod’s teammate Kevin Strijbos.

Wilvo Yamaha Official MXGP Team’s Jeremy Seewer was 6th looking for a way past Monster Energy Kawasaki Racing Team’s Clement Desalle. Cairoli made a pass on Seewer look easy when he dove to the inside and took the line away from the Swiss rider. Up next for the Sicilian was Desalle but it took 6 laps before making it past leaving only two to go.

However at the finish Herlings maintained his small gap over Gajser to take the win with the #243 of Gajser second and Van Horebeek 3rd. Coldenhoff held on to 4th while Cairoli took 5th.

Jeffrey Herlings: “I took a really good start, managed to take the holeshot and then check out. Pole position and fastest in time practice so I’m definitely looking forward to tomorrow and hopefully I can get 2 good starts and we will go from there.“

Antonio Cairoli: “It was a difficult day for sure, with the injury I still am not feeling 100% and the track is very fast so it is hard for me to attack. There is still a lot of races and a lot of points on the table so we try to do our best.“

Red Bull KTM Factory Racing’s Pauls Jonass impressively split Prado and Vlaanderen on the exit of turn 2 and took over the lead. Prado was quick to fire back and take the lead into turn 3 but left the inside open allowing Jonass the spot again.

The KTM exchange nearly gave Covington second from Prado but the young spaniard held on to the position. Covington then came under pressure from fellow Rockstar Energy Husqvarna Factory rider Thomas Kjer Olsen.

Vlaanderen, after his good start, fell back a few spots in the melee at the front before taking 5th from Kemea Yamaha Official MX2 team’s Ben Watson. STC Husqvarna Racing’s Henry Jacobi then attacked Vlaanderen for 5th which eventually sent Vlaanderen over a berm.

Vlaanderen lost the spot not only to Jacobi but Watson as well. Vlaanderen made his second pass of the race on Watson to get into 6th but was unable to catch Jacobi by the finish. Jonass meanwhile won his second qualifying race in a row with Prado 2nd, Olsen 3rd, Covington 4th, and Jacobi 5th.

Pauls Jonass: “The Qualifying race went pretty good, I just didn’t get the best jump off the start but I cut to the inside off the first turn and managed to pass Jorge. After that I just rode my own race and felt really good.”