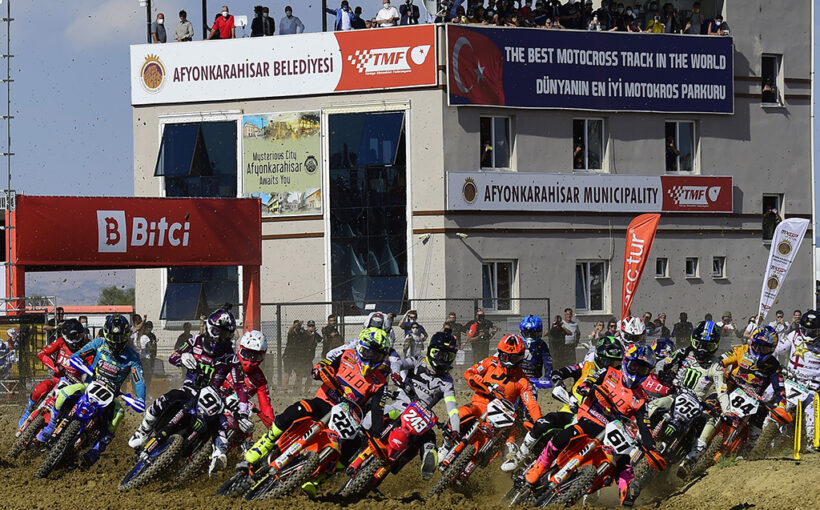 It’s crunch time in the FIM Motocross World Championship with the final champions awaiting to be crowned at the BitCi MXGP of Turkiye, the final stop of the 2022 campaign.

A big weekend is ahead for the title hopefuls in MX2 as Monster Energy Yamaha Factory Racing’s Jago Geerts and Red Bull KTM Factory Racing’s Tom Vialle enter the last round separated by just two points. The previous Grand Prix saw Vialle win on home soil, while Geerts was forced to settle for third, but there is no doubt that both riders will bring their ‘A game’ to the final race of the year in the hope of taking home the golden plate.

Alongside the final rounds of the FIM Motocross World Championship, we will also see the last round of the FIM Women’s Motocross World Championship that is currently being led by Nancy Van De Ven who is 25-points ahead of JK Yamaha Racing’s Lynn Valk. Shana Van der Vlist is third just a further 13 points behind, and just 3-points ahead of Larissa Papenmeier, which means that the medal-scoring positions are still up for grabs!

The same can be said for the EMX Open Championship that is currently headed by JD Gunnex KTM Racing’s Jose Butron, with Tomas Kohut in second position, 34-points behind, while Michael Sandner is third, a further 11 points adrift.

In MXGP, the title has already been decided and safely lies in the hands of Team HRC’s Tim Gajser who was also the overall winner at the MXGP of Charente Maritime. The Slovenian will no doubt be looking to add another GP win in Afyon and end his championship-winning season on a high!

Monster Energy Yamaha Factory Racing’s Jeremy Seewer occupies the silver medal position, which he is not in any danger of losing after a string of impressive performances that saw the Swiss podium the last three Grand Prix in a row, one of which was an overall victory. The Yamaha rider also came close to another GP win last time around in Saint Jean d’Angely, though was beat on the final lap by a hard-charging Gajser who passed him and Red Bull GasGas Factory Racing’s Jorge Prado.

The final medal scoring position is all to play for between Prado and Monster Energy Yamaha Factory Racing’s Glenn Coldenhoff who is just four points behind the Spaniard. Coldenhoff has had some impressive races this year and has been on the podium six times, one of which was an overall GP win. Meanwhile, Prado also has one GP win to his name, but 10 podiums in total, the most recent being in France a couple of weeks ago, which was his first podium in three rounds.

In the second half of the season, Coldenhoff has been stronger, as numerous factors added to Prado’s struggle, but hopefully, now the Spaniard is passed that and we will see a close fight for the bronze medal at the BtiCi MXGP of Turkiye this weekend.

Kawasaki Racing Team MXGP’s Romain Febvre will enter the final round looking to score that podium finish that he was been close to on several occasions since coming back from injury. There is no denying that Febvre has the speed but putting together two solid races has been the only thing holding him back. The Frenchman has also won the last two qualifying races at two very different types of circuits, so nothing is stopping him from doing the same this weekend in Turkey.

The fight for seventh in the championship standings remains very close between Honda 114 Motorsports’ Ruben Fernandez and Gebben Van Venrooy Yamaha Racing’s Calvin Vlaanderen who is just one point behind the Spaniard. It will be interesting to see who can come out on top in the last round of the year and occupy 7th in the MXGP Championship.

Monster Energy Yamaha Factory Racing’s Maxime Renaux and Red Bull GasGas Factory Racing’s Mattia Guadagnini are a pair to watch this weekend as both riders were on the podium last time around in Afyon. Renaux has had a couple of up-and-down weekends recently, while Guadagnini is still finding his feet in the MXGP class, but there’s no counting out the rookies on making things interesting this weekend.

While Geerts holds the slim advantage, it’s Vialle who is probably in the better position out of the two. The Frenchman has won the last two Grand Prix on the bounce in Finland and France, and he also dominated the doubleheader in Turkey last year, which means he will be full of confidence coming into this weekend.

Geerts’ results from last year in Turkey were 6th and 8th overall, which will not be good enough to secure the title, meaning he will need to bring his best performance to Afyon and arrive both mentally and physically strong if he wants to get his hands on his very first world title in MX2.

While the first and second place positions are yet to be decided, Red Bull GasGas Factory Racing’s Simon Längenfelder has no pressure coming into this weekend as he sits comfortably in third and has no big risk of losing that as he is 61 points ahead of his closest rival F&H Kawasaki Racing’s Kevin Horgmo who is fourth.

Monster Energy Yamaha Factory Racing’s Thibault Benistant is currently fifth in the standings and will enter the last event off the back of a podium at his home GP where he finished second overall behind Vialle. Despite a shoulder injury, Benistant managed to go 2-1 for the second step and will no doubt be eyeing up the podium again this weekend.

This weekend there are a few familiar faces making wildcard appearances which include the 2022 EMX250 Champion Rick Elzinga from Hutten Metaal Yamaha Racing who will line up in MX2 as he prepares for his move up to the world championship category next season. His teammate Andrea Bonacorsi will be racing in MX2 this weekend too, along with Fantic Factory Team Maddii’s Haakon Osterhagen as well as his teammate Cas Valk who recently secured the EMX125 Presented by FMF Racing title in Finland. It will be interesting to see what the wildcard riders can do and if they can get in the mix with the front runners and make for some even more exciting racing!