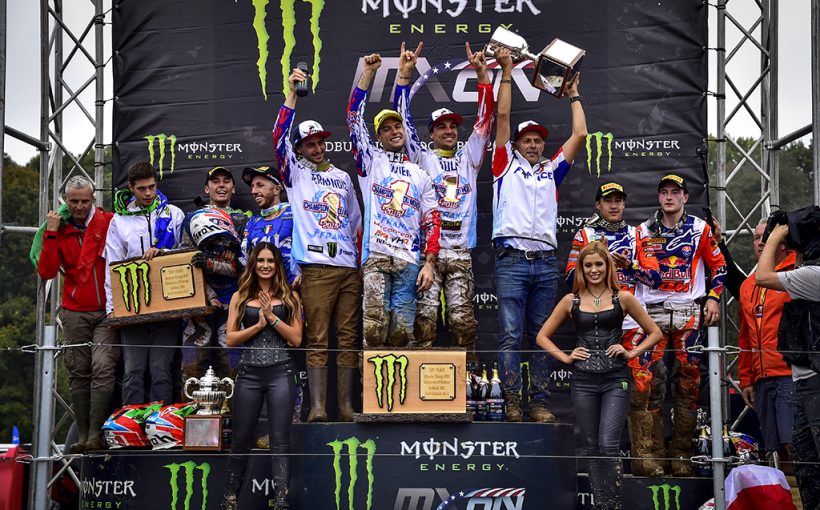 The world’s biggest motocross race, the Monster Energy FIM Motocross of Nations, has taken on the American circuit of RedBud today where Team France ecstatically hoisted the Chamberlain trophy for their 5th year in a row!

The French team was led to victory by team captain and Monster Energy FIM MXoN veteran Gautier Paulin along with Dylan Ferrandis and Jordi Tixier. Coming in second by only a two-point deficit was the Italian team of Antonio Cairoli, Michele Cervellin, and Alessandro Lupino. Taking the final spot on the podium was team Netherlands led by Jeffrey Herlings along with Calvin Vlaanderen and Glenn Coldenhoff.

The 72nd running of the event was one of the most successful ever as countless motocross fans from around the world joined the Americans on the Michigan hillsides. The atmosphere created at this year’s Monster Energy FIM Motocross of Nations was as unique as the event itself hosting riders and fans from over thirty countries. The world’s most passionate, energetic, and sometimes crazy motocross fans were one of the best parts of this year’s event providing an emotion packed day of racing.

A true pinnacle of the sport the Monster Energy FIM Motocross of Nations puts the usually independent riders into a team setting against competitors never before face truly testing their adaptability, speed, and consistency over a challenging weekend. While each fan and nation had their favorites for the win it was one of the most competitive and deeply talented Monster Energy FIM Motocross of Nations fields ever. With pride on the line and patriotism in their hearts 30 teams entered the competition but the field narrowed to an even more competitive 20 this morning.

19 teams directly qualified out of yesterday’s warm up sessions but the 11 teams remaining had one last chance this morning via winning the B-Final. Bringing the crowd to their feet with their B-Final win was Team Puerto Rico’s Travis Pastrana, Kevin Windham, and Ryan Sipes.

Following the speeches and tradition yelling of “RedBuuuuud” the United States national anthem was sang to open the event! As the crowd and fireworks erupted in the background the riders MXGP and MX2 of MXoN Race 1 went out on track for their sighting lap.

The first team to line up for Race 1 was Saturday’s top qualifier, the Netherlands. MXGP rider Jeffrey Herlings took full advantage of the start by scoring the Fox Holeshot after the better jump off the gate from Italy’s Antonio Cairoli was thrown away when he slid out in the first turn.

Team Spain’s MX2 rider Jorge Prado was right behind Herlings in second but took over the lead before the first lap was complete when the Dutchman slid out. France’s Gautier Paulin took over second ahead of Canada’s Colton Facciotti. Herlings got back up and on track in 5th behind Australia’s Hunter Lawrence while the American’s of Eli Tomac and Aaron Plessinger ran in 10th and 9th.

Herlings was quick to make passes through and at the start of the first official lap was up to 3rd as Lawrence also moved up to 4th. Paulin’s French Teammate Dylan Ferrandis was riding well in 6th but lost the spot to Great Britain’s Tommy Searle at the end of the second lap.

America’s Tomac was moving forward from 10th and by lap 3 he was up to 6th but his teammate Plessinger was dropping as far back as 21st. Meanwhile the 2018 MX2 World Champion Prado led but Herlings came up quickly one past Paulin for second. On lap 8 Herlings took the lead from Prado but his Dutch teammate Vlaanderen was out of the race.

By the finish Tomac worked his way up to 4th just behind MX2 rider Prado while Cairoli came from his first turn crash to 6th but Plessinger only recovered to 18th place. Herlings took the race win by 25 seconds over Paulin, 31 second ahead of Prado and 40 seconds ahead of Tomac. The results of the two riders in race 1 put France in the lead of the nations standings with a combined 9 points, 7 better than Italy in second and 9 better then Belgium in third.

The second race was the combined riders of MX2 and Open which saw the Netherlands going to line first again with Glenn Coldenhoff but this time no Clavin Vlaanderen after his injury from race 1 made it impossible to continue.

Down a rider Coldenhoff made the most of the situation for the Dutch team taking the Fox Holeshot and leading the again impressive MX2 rider Jorge Prado. Team Great Britain’s Ben Watson was up in third and leading Team Switzerland’s Jeremy Seewer while the American’s again struggled.

Justin Barcia was in 16th and Plessinger was in 18th on the first lap Barcia worked his way up to 9th by lap 9 as Coldenhoff still led Prado and Watson. Plessinger on the other hand only gained two positions throughout the entire race to finish 16th.

The Aussie MX2 rider Hunter Lawrence was pressuring Seewer as early as lap 2 but finally found his way past the Swiss rider on lap 7. 6 laps later Lawrence passed Watson for 3rd before finally moving into second ahead of Prado on the next to last lap.

Coldenhoff took the race win for the Netherlands ahead of Lawrence, Prado, Watson, and Seewer. Team France’s Ferrandis and Tixier scored 8th and 32nd as Tixier’s bike expire while Barcia made no further moves to take 9th. The 2-3 scores of Prado crowned him the MX2 overall winner while Team Australia took the lead in the nations standings ahead of Belgium and Italy.

The final race of the day was the one that decided the 2018 winner with the combined classes of MXGP and Open racing one last time. On the start it was Italy’s Alessandro Lupino taking the Fox Holeshot ahead of Germany’s Ken Roczen and the Netherlands Glenn Coldenhoff.

Coldenhoff took second away from the German on the exit of the second corner before taking the lead from Lupino only a few corners later. Paulin moved into third as Herlings came from a poor start to pass both Roczen and Paulin in one lap.

Coming forward with Herlings was Antonio Cairoli but the Italian got held up by Paulin as Herling took 2nd from Lupino. After looking for a way by Paulin for 3 laps Cairoli moved to 4th but then both he and Paulin were passed by Germany’s Max Nagl.

Nagl fell afterwards to 7th however but Cairoli was only 4th for a lap as Paulin took the spot back then went on to pass Lupino. 2 laps before the finish Lupino and Cairoli swapped positions as Coldenhoff went 1-1 with Herlings in second and Paulin 3rd.

The strong races and class overall wins from both Coldenhoff and Herlings however were not enough to make up for the absence of Vlaanderen and the consistency of team France who took their 5th successive Monster Energy FIM Motocross of Nations win, the 6th in their country’s history.