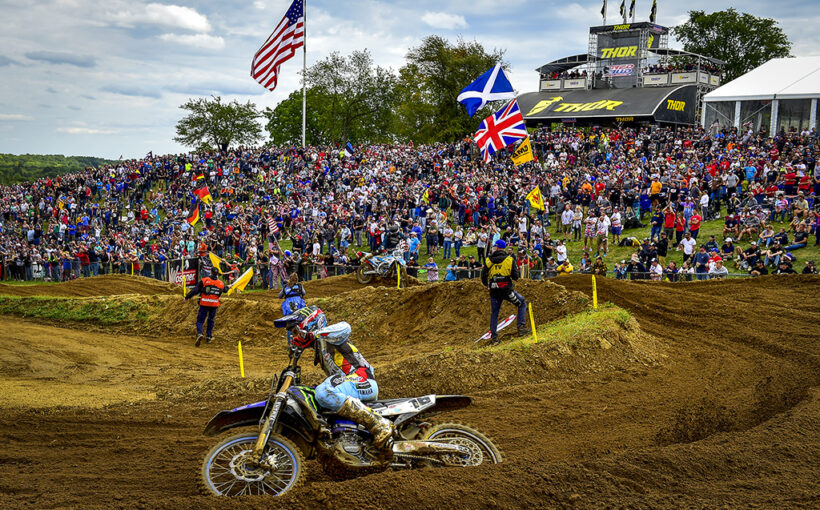 The qualifying heats at the 75th edition of the Monster Energy FIM Motocross of Nations took place earlier today, as the 34 nations that hope to compete for the Chamberlain Trophy this year, took to the circuit for the very first time this weekend here in RedBud, United States.

The qualifying races today decided which 19 teams will head straight into tomorrow’s races, while the rest will battle it out for the final spot in the B final tomorrow morning. For teams who have their eyes set on the podium, the qualifying heats were crucial for deciding the best gate pick for the main action.

In the MXGP qualifying heat, it was Team Switzerland’s Jeremy Seewer who was the leading rider into the first corner as he led Team Australia’s Mitch Evans, Team Netherlands’ Glenn Coldenhoff and Team Belgium’s Jago Geerts, who made his 450cc debut.

Meanwhile, Team USA’s Eli Tomac started down in 10th, though was able to make several passes in the opening laps to edge closer to the top five.

Seewer was looking solid in the lead until he folded the front before the end of the opening lap which allowed Evans to take over first place. Geerts was second at this point and pushing the Australian for the win. Evans was able to hold off the Belgian for two laps before Geerts found his way past.

Geerts then set the fastest lap of the race as he looked to break free of the rest of the field. All while, further down the order, Tomac was applying pressure onto Team France’s Maxime Renaux. It took the American several attempts to get around the Frenchman, but he was eventually able to do so and focused on Team Spain’s Jorge Prado and Coldenhoff who were just ahead.

Geerts led the way by 3.121 seconds as Seewer was looking to make a comeback after his mistake earlier on in the race. The Swiss got onto the rear wheel of Evans before moving past the Australian with 3 minutes and two laps to go, with Evans coming under further pressure by Tomac.

Four laps from the end of the heat, Tomac was able to pass Evans and set his sights on Seewer as the pair battled intensely for the next couple of laps. Mistakes crept in for both riders, but it was Tomac who came out on top after passing Seewer on the final lap.

Geerts ended up winning the race ahead of Tomac, Seewer, Evans and Prado who rounded out the top five.

Jago Geerts: “Yeah, for sure. I didn’t expect it. This morning, I was already feeling really good on the track, and I liked the 450, so it was already good this morning. I had a good start in the qualifying heat and managed to win, so I’m really happy with that. We have also qualified well with Team Belgium, so it will be fun tomorrow. I think if everything goes well, we can be on the podium. So that’s the goal, and we will do everything for that”.

In the MX2 qualifying, Team Spain’s Guillem Farres took the holeshot ahead of Team Netherland’s Kay de Wolf, though were both quickly passed by Team USA’s Justin Cooper who was on a mission to deliver a top result in front of the home crowd.

Team Switzerland’s Valentin Guillod crashed and did not carry on with the race, which was a big blow for the team.

At the front of the field, Cooper led the way comfortably and was setting some fast laps as he extended his lead to 5.917 seconds ahead of Farres. Musquin then passed Adamo for fourth, as Lawrence got around Farres for second place on lap three.

Team Japan’s Jo Shimoda was having an unlucky qualifying race as he crashed early on in the heat, though was able to get his head down and get back to 12th by the chequered flag.

In the closing stages, De Wolf and Adamo were having a nice battle for fifth, but this battle was cut short after a wheel problem for de Wolf that took him out of the race.

Cooper went on to win the heat comfortably ahead of Lawrence, Musquin, Farres and Adamo.

Justin Cooper: “That’s pretty much how it was for my seat also. It was nice with the fans. Honestly, I’ve never had that many people behind me, cheering me on throughout the whole track, that was something else and I’ve never experienced that, so it was kind of like an adrenaline rush the whole race. I was having a lot of fun out there and I almost wished it was longer. Now just need to bring the same energy tomorrow for the races and keep that intensity“.

Team USA’s Chase Sexton started fourth, with Team Australia’s Jett Lawrence further down in sixth on the opening lap, as Guadagnini crashed out of third.

Lawrence then battled closely with Fernandez, who was not looking to give up his position easily. The pair had a couple of close moments before Lawrence was able to get by on the second lap.

By that point, Sexton was third and eyeing up Ferrandis and Vlaanderen ahead. The American made some nice, fast, passes and was the new race leader by the end of the second lap. At the same time, Vlaanderen was also passed by Ferrandis and dropped back to third.

Sexton immediately set the fastest lap of the race, as he looked to break free of Ferrandis, while Lawrence passed Vlaanderen for third.

All eyes were on the leaders, who battled closely for the entire race as they kept the gap to just under two seconds. This was until Ferrandis caught his leg in his rear wheel and had to stop to get it out before continuing with the rest of the heat.

Sexton was able to pull away as a result and looked like he was on his way to Team USA’s second win of the day, but this was until he crashed on the final lap of the race, which easily allowed Ferrandis through.

Ferrandis was the qualifying race winner ahead of Sexton, Lawrence, Fernandez and Vlaanderen.

Dylan Ferrandis: “It was a very weird moment, it had never happened to me before. Before the finish jump, my leg went in the back of my bike and was stuck in the wheel, so my knee was completely stuck. I had to stop, push the bike in reverse and then get my leg free and go. I don’t know why this happened, but these sorts of things always happen at the Motocross of Nations… The expectations for tomorrow are very easy, we want to win and we will try everything to win. The battle has already started against Team USA and I think this will be really interesting. We will give everything, as everybody, but I think we have a strong team to do it”.