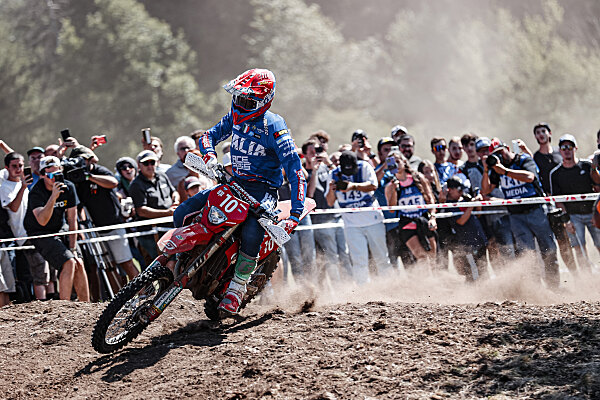 REIGNING E1 WORLD CHAMPION GETS ON THE GAS IN FRANCE TO ALSO HELP ITALY TO SECOND IN THE WORLD TROPHY TEAM CATEGORY.

What a year 2022 is shaping up to be for Andrea Verona! Already crowned Enduro1 World Champion, the GASGAS Factory Racing ace made it back-to-back Enduro1 class wins today at the ISDE with a truly stunning performance in France. And not only that, he also picked up two outright day wins on his way to finishing as a close runner-up in the overall individual standings. Nice work, Andrea!

Andrea Verona: “It’s been another amazing ISDE for me. Winning Enduro1 for the second time was incredible and it has been a great fight with Josep Garcia in the overall competition all week. We really pushed each other, and it was close at the end, but I wasn’t quite close enough! On the Final Cross Test it was a real sprint finish and I suffered with a little arm pump. Racing closely with Josep, we both really wanted that win and I held on which helped Italy move up to second overall in the World Trophy. So, digging deep there really paid off for the team! Overall, it’s been a tough week but a memorable one, and I must thank my team for building me such a great bike for me to race to another win here at the ISDE.”

Last year’s ISDE was pretty good for Verona by anyone’s standards. But the 2022 edition was even better! Charging to the E1 victory on every day of the prestigious event saw the speedy Italian simply dominate the proceedings. Increasing his E1 lead with every passing day, Andrea topped the Enduro1 class with a near four-minute margin of victory.

Verona’s incredible pace carried over into the overall individual classification too. After placing second on day one and third on day two, the 23-year-old stormed to outright victory on day three to reel in early leader Josep Garcia. Second again on day four, Verona took another win on day five to head into the sixth and final day of racing less than one minute behind.

But with just the relatively simple and traditional Final Cross Test remaining, making up the time he needed was next to impossible. However, with the World Trophy standings still all to play for, Verona secured a crucial victory, which helped elevate Team Italy into second overall in the final classification. What an incredible ISDE it’s been for the GASGAS Factory Racing star!

With the dust now settled in France, Andrea will take a well-earned rest before returning to EnduroGP World Championship duties in Germany on October 14-16.