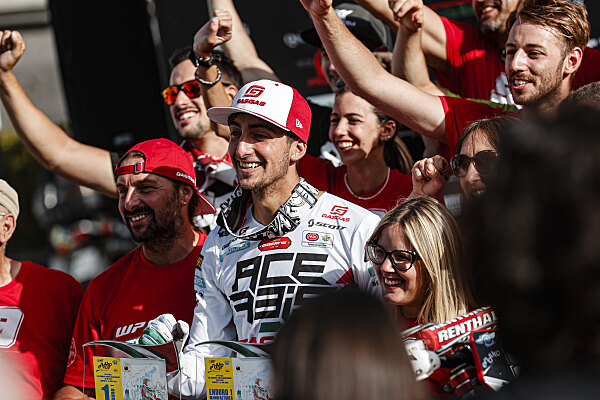 GASGAS is proud to announce the signing of a two-year contract extension with 2022 Enduro1 World Champion Andrea Verona. The super-fast Italian will continue to race for GASGAS Factory Racing in the FIM EnduroGP World Championship through to at least the close of the 2024 season!

From joining GASGAS Factory Racing at the beginning of the 2021 season, Verona has dominated the Enduro1 category on his GASGAS EC 250F. Not only that, but the 23-year-old has also won back-to-back E1-class victories at the prestigious International Six Day Enduro – an incredible feat when up against the world’s best.

Success hasn’t just been confined to the E1 category, however. Claiming five podiums over the course of the 2021 season, Verona ultimately placed third overall in the hotly contested EnduroGP class. Now, in 2022, the ever-smiling Italian has delivered an incredible season of consistent rides, claiming his first overall EnduroGP day win as well as a seriously impressive run of top-three overall results, missing the podium just once in 12 days of racing.

Heading into the seventh and final round of the 2022 season in Zschopau, Germany this weekend, Andrea leads the EnduroGP standings by a substantial 28 points over his closest rival. Aiming to give his all as always, Verona has his sights set firmly on putting in another super strong ride and doing all he can to secure the 2022 EnduroGP crown.

Andrea Verona:“I’m really happy to continue racing with GASGAS Factory Racing for another two years. The past two years have been amazing, not only in terms of the results but also how the whole team works together. I think it’s been really good for me, and really good for GASGAS also. I feel really good with the bike and really good with all the members of the team – I think it’s the most complete team in the paddock in terms of bike and the overall set-up. Already I’m looking forward to the winter as we will again work really hard as a team, testing the bike and preparing for what I hope will be another great season in 2023. But first we have this weekend and the last round of the championship. I’m leading the EnduroGP standings by 28 points, which is great, but as we know anything can happen, and for me it’s important to stay focused on my racing. I know in myself if I ease off at all I am more likely to make mistakes, so this weekend I’m planning to give it everything and hopefully we can finish the season in a good way.”

Robert Jonas – Head of Motorsports Offroad:“Enduro is hugely important to GASGAS and so to re-sign Andrea for two more years is a massive boost to the team, strengthening the brand’s commitment to the FIM EnduroGP World Championship. Andrea has shown incredible speed and consistency throughout the 2022 season, proving to be almost unbeatable in the Enduro1 class and is now on the brink of claiming his first EnduroGP title. Whatever happens this weekend, we’re proud and excited to have Andrea with us for the next two years.”

Fabio Farioli – GASGAS Factory Racing Enduro Team Manager:“It’s great to have Andrea confirmed with the team for the 2023 season. This year has been really exciting, both for him and GASGAS Factory Racing. By claiming the Enduro1 title early, then going on to take the E1 win at the ISDE, Andrea has already shown his class this season. Now, with one weekend of racing left to go, we as a team will support Andrea the very best we can in order for him to finish the season on a high and hopefully with another world title to his name. After that, we are already making plans for next year and will soon start testing as we work together to hopefully achieve even more success.”