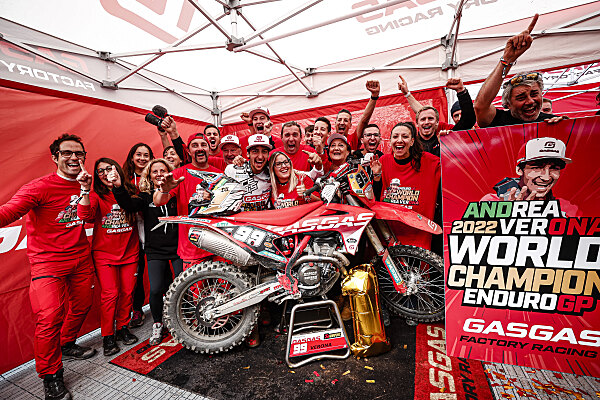 Simply amazing! Andrea Verona has won the 2022 FIM EnduroGP World Championship title after placing fifth overall on day one at the EnduroGP of Germany. Adding further silverware to his already well-stocked trophy cabinet after claiming his third Enduro1 title back in August this year, Verona’s incredible season-long speed and consistency saw him secure the EnduroGP crown with a day of racing to spare. A deserving two-time world champion in 2022, Andrea Verona just keeps on getting better and better!

Andrea Verona:“This feels good! I’m super happy to be EnduroGP World Champion for myself but also the team. My goal was to win but I didn’t expect it to happen this year as I still have some areas of my riding to work on, but I was really consistent, and this is what won me the EnduroGP title. I was only off the podium two times all season including today, and this made all the difference. I have to say a huge thanks to GASGAS Factory Racing, all of the team sponsors, and everyone in Austria as this is a massive team effort. This is the biggest title to win in enduro and I believe I’m the first Italian to do it so, yeah, amazing. I think it may take a little while to sink in, but it’s been an amazing year and one that I won’t ever forget.”

Way back in May, Verona made his 2022 EnduroGP title-winning aspirations crystal clear with a stunning victory on day one in Spain. From there onwards, well, the EC 250F racer simply excelled at every event and in all conditions. Combining his blazing-fast speed with unrivalled consistency, Andrea hit the EnduroGP podium on every single day of racing that followed except one, to build up a comfortable points lead ahead of the final round in Germany.

Arriving at the season finale needing to score just 13 points across the two days of racing, even if his main rival won on both days, the odds were heavily stacked in Andrea’s favor. But leaving nothing to chance, the 23-year-old gave 100% as always to wrap up the 2022 EnduroGP title in style with a rock-solid fifth-place finish on day one.

For Verona and GASGAS Factory Racing, that’s three world titles in just two years together! Two in E1, and now the prestigious EnduroGP crown. And with the super-fast and gracious Italian confirmed to race with GASGAS Factory Racing for at least another two seasons, we can’t wait for 2023 and beyond. But first, the final day of racing in Germany!

Fabio Farioli – GASGAS Factory Racing Enduro Team Manager: “What can I say? Andrea has won almost everything there is to win in 2022. The Italian championship, E1, EnduroGP, and even the Super Test series. He is so talented on a bike, and he has a smart head on his shoulders. When he knows he can’t win, he doesn’t ride over his head, and he takes the most points possible. He’s so fast in all conditions – stones, rain, mud, hardpack, everything – and he very rarely makes mistakes. For these reasons, he is a complete, all-round champion and I think he has more to give. I think this is just the start of his enduro career and he has a very bright future ahead of him.”

Championship Standings – 2022 EnduroGP World Championship, (after day 1 at round 7)