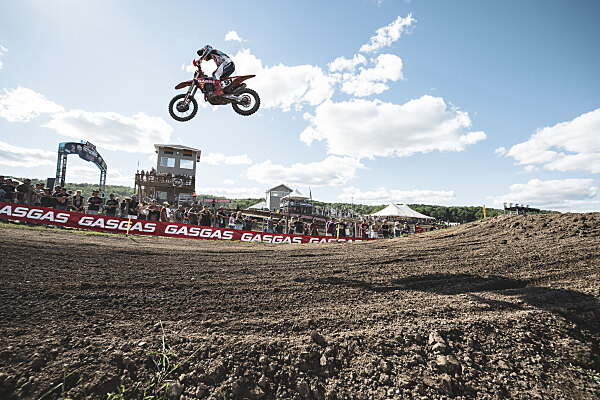 BARCIA SCORES A TOP-FIVE IN 450 MOTO 2 IN FRONT OF HOME STATE FANS.

Justin Barcia and the Troy Lee Designs/Red Bull/GASGAS Factory Racing team was back in action this weekend with the ninth round of the 2022 AMA Pro Motocross Championship in New Berlin, New York. Known for its rough track conditions, the historic Unadilla National delivered on all the hype this year as our riders found themselves battling everything from mid-pack starts, to the gnarly ruts and lots of lapped traffic!

After a two-week break from racing, Barcia and the crew were ready to come in hot for a “home-state” appearance in New York. In the first 450 moto, he got off to a decent start in eighth and immediately put his head down to ignite a charge through the pack. An unfortunate crash brought his momentum to a halt early on and he spent the rest of the moto trying to fight through a rough track, finishing 10th. The New York native cut his first-moto losses as soon as the gate dropped for Moto 2, ripping a great start aboard his MC 450F. He ran up front for the first couple laps before setting into a comfortable fifth, ultimately bringing it home for a fifth-place finish in the second moto.

Justin Barcia:“Going into the first moto, I was feeling good! I got off to a decent start and unfortunately had a crash and found it a little hard to regroup, so I ended up getting 10th. It’s frustrating because I felt like I didn’t ride to my ability but I came back, made a couple more bike changes and ripped a pretty good holeshot in the second moto. I rode behind Aaron [Plessinger] a lot of the race and we were pushing each other hard; I was trying to catch him really bad but just couldn’t make it happen. I was really happy with the change we made on the bike and I was happy with the finish. Wish I would have had a better first moto but we’re definitely going in the right direction and headed towards that podium in these last few races!”

Team rider Pierce Brown once again flew the flag solo in the 250MX class as teammate Michael Mosiman remains sidelined from a crash that took place at the Spring Creek National. Brown found himself buried off the start of the first moto, rounding the opening lap in 13th. He put on a fighting charge to get into top-10 contention early on, eventually making it up to ninth later in the race. With a much stronger start in the second moto, Brown put his MC 250F into sixth on the opening lap and he diced around inside the top-eight for the first half of the race. He fell back to 10th later in the moto and that’s where he ultimately finished.

The 2022 AMA Pro Motocross Championship heads into its final stretch of racing with Round 10 of the 12-race series taking place next Saturday, August 20 with the Budds Creek National in Mechanicsville, Maryland.

Championship Standings – After Round 9