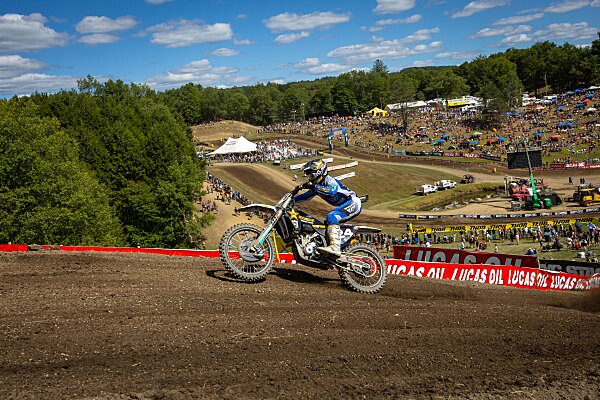 It was a steep return to the AMA Pro Motocross Championship for the entire Rockstar Energy Husqvarna Factory Racing Team, who lined up with a nearly-complete four-rider roster for the first time in New Berlin, New York. For the team’s 250MX riders, the Unadilla National served as the first race back after a two-week break from racing, while 450MX riders Malcolm Stewart and Dean Wilson each made their 2022 outdoor debut at Round 9. Once again showcasing his determination in the roughest of track conditions, RJ Hampshire was the team’s top finisher with 3-8 moto finishes and a top-five overall in the 250MX class.

After qualifying fourth, Hampshire grabbed a top-10 spot out of the gate in Moto 1. He sat in ninth for the first five laps before climbing his way up to fifth over the next few laps. Nearing the end of the race, he picked up two more positions to finish third, scoring his first podium since Round 1. In the second moto, Hampshire found himself buried in 13th after experiencing an issue on the opening lap. He gained a few spots up to 10th through the first half of racing but lapped traffic proved to be a challenge heading into the second half of the moto. Determined to excel, Hampshire continued to battle through the field, ultimately landing his FC 250 into an eighth-place finish.

“We had positives today,” Hampshire said. “I was fast in qualifying, which I haven’t been. First moto, I felt like I got into a really good flow early and was clicking good laps off and landed back on the podium for the first time since Round 1. Second moto, I got a decent start and then just split out right after the finish. Someone went into the line I was going for and I tried to get out of it and just swapped the front. It was a bummer but we’ll definitely take the positives out of today.”

Jalek Swoll got off to a good start in Moto 1, positioning himself just outside of the top-10. Unfortunately, he struggled to stay upright throughout the race. After falling back to 16th on the second lap, Swoll made a strong push to climb into ninth but he lost a few spots to eventually finish in 12th. In Moto 2, Swoll charged to an eighth-place position on the first lap. He tried to maintain the spot, but a few mistakes dropped him back to ninth. Holding steady in ninth until just after the halfway mark, Swoll eventually slipped to 11th. Battling lapped traffic late in the race, he wasn’t able to make any moves and he ultimately finished 11th in the moto and 11th overall for the day.

“My starts were good, I just kept finding myself on the ground,” Swoll said. “I was trying to push but every time I fell, it was just a huge gap – so I was kind of just in no man’s land. I feel like my riding was okay, I just have to get those starts again and just be a little bit better and we’ll be fine.”

Lining up for his first AMA Pro Motocross race in eight years, team rider Malcolm Stewart also made his return to racing in New York after missing the first eight rounds due to injury. With a start just outside the top-10, Stewart ran in the 12th-place position early on, bouncing between 13th and 14th for the remainder of the race. Easing his way into the long motos, Stewart ultimately finished 14th. In Moto 2, he grabbed a 14th-place start and immediately went to work in chasing down his teammate, Wison, ahead. Hovering around the top-15 battle, Stewart dropped a couple spots later in the race, settling for 16th at the line.

“First outdoor race back in eight years and I think it was a good day just being back,” Stewart said. “Of course, the results didn’t show it, but just having that race back there again was really good for me. I’m happy to be back, but we have some work to do. I’m really looking forward to Budd’s Creek because that’s obviously one of my favorite tracks. I learned a lot, and you can’t replicate racing, so this is just a good race just to come back to – to get through it.”

After several months off of competition due to injury, Dean Wilson was happy to make his debut alongside his teammate. However, with a less-than-ideal gate pick in Moto 1, Wilson struggled to get a good position off the start. Sitting around 23rd on lap one, he began picking off riders to get just inside the top-20 nearing the end of the race, earning his first point of the season with a 19th-place finish. In Moto 2, Wilson chased the top-10 battle with teammate Stewart on his heels, locking in 13th for the remainder of the moto.

“On paper, it wasn’t very good but it was a long time off,” Wilson said. “I think it was five months off total, so it’s great to be back. I really struggled with the track, it was so choppy and I feel like I’m not quite in shape where I should be yet. I got arm-pump really bad in the first moto so I told myself to just get through it and the second race was a little bit better. I think I’m going to get better every moto, it’s just tough coming back, especially when all these guys have been racing and they’re in the flow. By the end of the summer, hopefully I’ll be where I should be.”