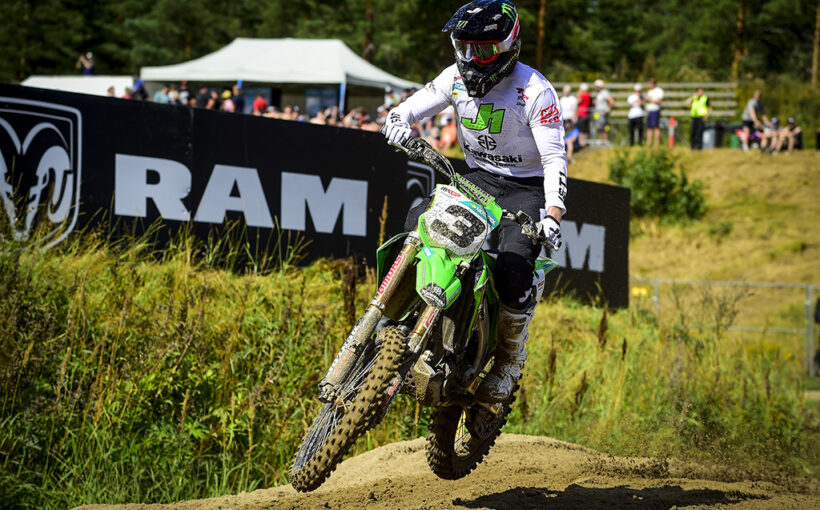 Febvre and Geerts Secure Pole Positions in Qualifying at the MXGP of Finland.

The first day of racing at the MXGP of Finland in Hyvinkää has been a memorable one with qualifying race victories by Kawasaki Racing Team MXGP’s Romain Febvre and Monster Energy Yamaha Factory Racing’s Jago Geerts.

For Febvre it was his first pole position since 2020, while Geerts secured his fifth qualifying victory of the season and is looking confident for tomorrow’s main races.

And that was not all, as Fantic Factory Team Maddii’s Cas Valk secured the EMX125 Presented by FMF Racing crown after he crossed the line at the end of the opening race, and will no doubt be far more relaxed with the gold plate during the second race tomorrow.

By the end of the opening lap, Febvre took over the lead from Seewer, who quickly began to come under pressure from Bogers from behind.

Further down the order, Gajser managed to pass his teammate Mitch Evans though did not make further progress as the pair finished in sixth and seventh.

Febvre got comfortable in the lead and held a 3.467 second gap over Seewer and Bogers, while Coldenhoff began to feel the pressure from Prado and Gebben Van Venrooy Yamaha Racing’s Calvin Vlaanderen who was making good progress up the order.

On lap three, Vlaanderen caught Prado by surprise as he stole fifth from the Spaniard and was quick to latch on to Coldenhoff who was ahead in fourth.

Febvre set the fastest lap of the race as he began to break free of the other riders, while Seewer got caught and passed by Bogers on lap six. The Swiss dropped a further two positions as both Coldenhoff and Vlaanderen got by.

Vlaanderen was looking to keep pushing further, though a mistake saw him crash and fall back to 10th where he eventually finished.

Febvre ended up winning the qualifying race ahead of Bogers, Coldenhoff, Seewer and Prado.

Romain Febvre: “I’m really happy about today. I felt great out there since free practice. I got a good start, was behind Jeremy, made a pass and could put a good gap. I’m happy about my speed today but we still need to work, hopefully, tomorrow we secure a good result”.

The MX2 qualifying saw two gate drops after a false start on the first try that saw the riders brought in after a couple of laps.

The second time around it was Mikkel Haarup of Big Van World Kawasaki who got off to a flying start and led championship leader Jago Geerts of Monster Energy Yamaha Factory Racing while his rival Tom Vialle of Red Bull KTM Factory Racing crashed on the second corner.

By the end of the official first lap, Geerts was already in the lead, with Haarup keeping strong in second position, while Vialle got going in 12th.

Geerts stretched out his lead to a comfortable 5.624 seconds, while behind him Simon Längenfelder of Red Bull GasGas Factory Racing got by Kay Karssemakers of Hitachi KTM fuelled by Milwaukee for fifth.

On lap four, Moosdijk got himself into second, as Vialle closed in on Diga Procross KTM Racing’s Liam Everts for eighth. Everts responded immediately to take back his position though Vialle was able to make it stick eventually. Though that only lasted two laps, as the Frenchman dropped back to ninth by the end of the race.

de Wolf though was a man on a mission, as he broke into the top 10 by lap seven and was looking strong as the race progressed to eventually finish in sixth.

F&H Kawasaki Racing Team’s Kevin Horgmo was challenging well inside the top 10 before a bike issue forced him out of the race which means he will start tomorrow’s races from the back of the grid.

In the end, Geerts secured his seventh pole position of the 2022 season ahead of Moosdijk, Haarup, Längenfelder and Monster Energy Yamaha Factory Racing’s Thibault Benistant who rounded out the top five.