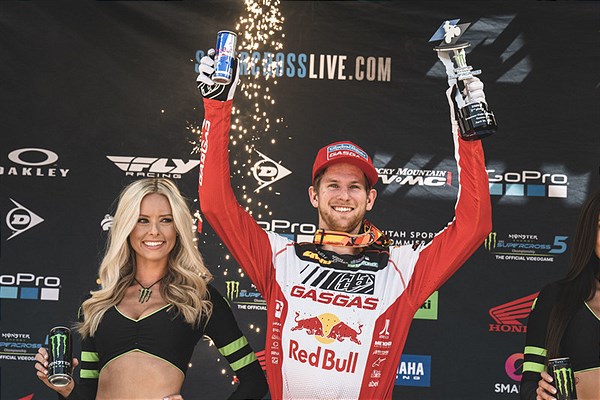 It was another day of close battle for Troy Lee Designs/Red Bull/GASGAS Factory Racing’s Michael Mosiman, who came away with a solid runner-up finish at the Denver SX. With a heated championship battle taking place in the 250SX Western division, the penultimate round of the AMA Supercross Championship was action-packed, to say the least, and Mosiman was right in the mix!

Today’s track conditions were tricky as many riders experienced, and our guys were no exception! Mosiman got off to a strong start in his heat race, placing his MC 250F into the top-three early on. Three laps in, Mosiman made his way into second and he immediately made a charge for the lead. Unfortunately, the slick track got the best of him and he went down. Re-mounting in fourth, he clawed his way back up to a second-place finish.

In the Main, Mosiman got off to a fourth-place start and he immediately went to battle for a podium position. Blitzing through the whoops to overtake third, the NorCal native set charge for the lead battle between championship contenders Hunter Lawrence and Christian Craig. Capitalizing on a mistake by Craig, Mosiman slid into second early on and he maintained a strong ride for the rest of the race to secure his second runner-up finish of the season.

Michael Mosiman:“It’s so good to be racing here in Denver, and the fans are awesome! I got off to a pretty good start. Those guys were battling, I was battling, and it was a little bit of chaos out there. I was trying to watch out for the booby traps, but it was fun though! I’m just trying to focus on myself, taking what I’ve learned here and apply it next weekend. I’m looking forward to it.”

In 450SX action, team rider Justin Barcia had a tough day but he powered through with good spirits and he now turns his attention to the season finale next weekend. He got a great start in the heat race aboard his MC 450F and he battled for second early on. Dropping to third on lap two, Barcia stayed inside the top-three for most of the race before ultimately getting shuffled back to fourth.

In the Main Event, Barcia started off in sixth and he worked his way into fourth early on. He kept a steady pace through the first half of racing, setting himself up for a great shot at the podium until he, too, fell victim to the slick track conditions. After sliding out in a corner, he dropped back to seventh and wasn’t able to make forward progress at the end of the race. Finishing seventh, Barcia now sits fourth overall in the 450SX Championship with one round to go.

Justin Barcia:“A little bit of a difficult day. I had another really good start in the main and was having a really good race, charging hard and really close to the podium. Unfortunately, I had a crash and that was pretty much all the race wrote. I’m definitely disappointed in the day but definitely did a lot of great things as well. I had a lot of great starts today and I’m looking to bring those into SLC and get after that podium!”

The Troy Lee Designs/Red Bull/GASGAS Factory Racing Team heads to Salt Lake City, Utah next Saturday, May 7 for the final round of the 2022 AMA Supercross Championship.

Championship Standings – After Round 16