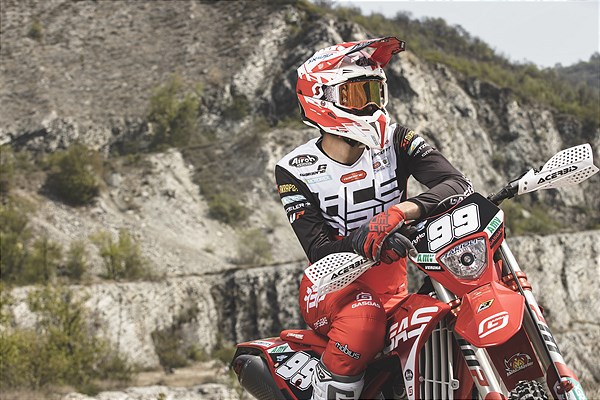 It’s nearly go time! And Andrea Verona is all-set to get on the gas this weekend when the 2022 FIM EnduroGP World Championship fires into action. Looking to both successfully defend his Enduro1 world title while also fighting for the coveted EnduroGP crown, the GASGAS Factory Racing star is ready to battle for victory in 2022, starting this weekend in Spain.

The GASGAS Factory Racing star has made optimum use of his off-season both in terms of training and developing his GASGAS EC 250F. Contesting the opening five rounds of the Italian Enduro Championship, Verona has shown impressive speed in the tough, varied conditions, securing an overall win first time out at round one. Feeling fit and fully motivated to attack this year’s Enduro GP championship, Verona knows exactly what it takes to fight for the world title.

The 2022 EnduroGP season kicks off with back-to-back opening rounds, which start in Spain this weekend – May 6-8 – followed by round two in Portugal on May 13-15. Keen to get his E1-class championship defense off to the perfect start, Andrea will be looking to secure strong results over the coming two weekends and stretch out an early advantage over his rivals.

EnduroGP action starts this coming weekend in Lalin, Spain (May 6) with the ever-popular Super Test, followed by two full days of racing between the tapes.

Andrea Verona:“I’m really looking forward to getting back to EnduroGP action. It looks like it will be a tough but exciting season and I can’t wait to give it everything I have. The year so far has been good for me – physically I’m well, and in the races we’ve done so far, I’ve had some really good results, including wins in the Italian championship. We’ve made some small but effective changes to the bike over the winter, nothing huge, but they have definitely improved my speed. We worked closely with WP Suspension and I have an even better feeling on the bike now. My main goal for this season is of course to win the Enduro1 title again. It will be tough as always but I’m confident in myself, the bike, and my team. Secondly, I’d like to take some overall day-wins this year. I had a couple of second places last year and would like to go a little better in 2022. I came third overall in EnduroGP last year, so this year I want to do better. The class looks to be even more competitive than ever, but as always, I’ll do my best and keep fighting. Hopefully, with some good, consistent results, I should be able to fight for the title.”