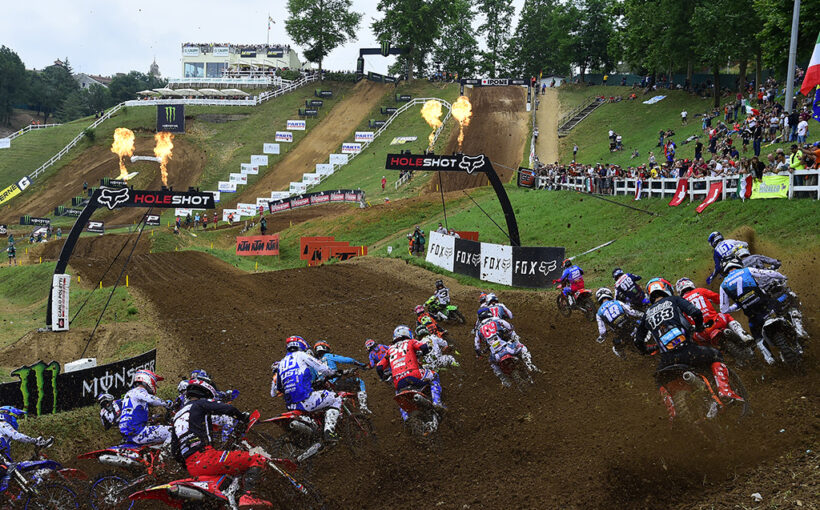 The seventh round of the FIM Motocross World Championship is heading back to the legendary Maggiora Park this weekend for the MXGP of Italy.

Last season, Maggiora Park made its much-anticipated return to the MXGP calendar, after closing its doors in late 2016. In that time, the well-known Italian circuit was revived and made its World Championship return, re-introducing a beloved old-school traditional circuit with some modernised touches.

The hillside track based in the north of Italy has a rich history having hosted numerous FIM Motocross World Championship events since the late 60’s, including the most memorable 1970, 1986 and 2016 Monster Energy FIM Motocross of Nations.

Joining the MXGP and MX2 riders this weekend will be the EMX categories with rounds three and four of the EMX250 and EMX Open Championships. In EMX250, after two rounds Hutten Metaal Yamaha Racing’s Rick Elzinga leads the championship with 93 points over Fantic Factory Team Maddii’s Cornelius Toendel and Oriol Oliver of WZ Racing. Elzinga has won both of the first two rounds in Lombardia and Portugal, so it will be interesting to see if he can carry on his winning streak, or whether a new rider will rise to the occasion.

Meanwhile in EMX Open, just a point separates Raths Motorsports’ Michael Sandner and Jose Butron from JD Gunnex KTM Racing Team in the championship standings, after Sandner’s DNF in race one at the Latvian round saw him in danger of losing the red plate. Butron will enter the Italian round following his first overall victory of the season, so it will be interesting to see whether he can repeat his success and take control of the series.

As we head into round seven of the series, news broke that defending world champion Jeffrey Herlings of Red Bull KTM Factory Racing will sit out the remainder of the season. Herlings will undergo two corrective surgeries and will instead focus his efforts on being ready for 2023. Meanwhile there is still no news on Kawasaki Racing Team MXGP’s Romain Febvre and his return.

At the moment Team HRC’s Tim Gajser is in the driving season of the championship and after the perfect scorecard in Latvia last weekend and his fifth GP win of the season, the Slovenian will be looking to continue his winning streak and deliver a much more positive result this time around in Maggiora, compared to last year’s 5-6 scorecard for seventh overall.

Gajser has previously won in Maggiora back in 2015 though this was in MX2, and he is yet to win in the MXGP category at the hillside venue. As it stands, Gajser currently leads all of the stats so far in terms of pole positions, laps led, race wins, GP victories and podiums, therefore having him as a top contender for the win this weekend wouldn’t be that surprising.

Of course, his closest title rival and the rider who follows him in all of those stats is Red Bull GasGas Factory Racing’s Jorge Prado. Prado will be looking to bounce back after a disastrous weekend in Kegums. A 12th and 13th in the races saw Prado now drop to 66 points behind Gajser, so maximum points will be needed for the Spaniard in order to not lose grip on his chance to go for his first MXGP championship.

Standing Construct Husqvarna Factory Racing’s Pauls Jonass will enter the Italian Grand Prix off the back of a very successful weekend on home soil that saw him battle at the front of the field and challenging Gajser for race wins on his way to his first podium of 2022. In the end Jonass confirmed he needed to “keep his feet on the ground” which was a very mature decision by the Latvian, in order to deliver a solid result rather than risk it all. Now having had a race weekend where he was consistently fighting with the championship leaders, this should give him confidence for the rest of the year and it will be interesting to see how he can follow up with that.

Monster Energy Yamaha Factory Racing’s Glenn Coldenhoff was among the three riders that were tied on points for the GP victory last season in Maggiora. The Dutchman finished on 40 points alongside Red KTM Factory Racing’s Jeffrey Herlings and Antonio Cairoli, with Herlings’ race two victory eventually overruling the scores of the other two riders. Having those memories will be a bonus for Coldenhoff who has been building for a podium finish this season and has been looking strong ever since Portugal where he won the qualifying race and has been close to a spot on the box ever since.

His teammates Maxime Renaux and Jeremy Seewer have also been in the mix at the sharp end consistently. Though when it comes to looking at the numbers, Renaux is currently the most successful rider on the team this season, if we measure ‘success’ by podium finishes, which the Frenchman has three under his belt compared to Seewer’s one. Seewer also revealed that he struggled in Latvia, as did Renaux, so it would be good to see the pair back at the top this time around.

Honda 114 Motorsports Ruben Fernandez is a rider to watch this weekend. The Spaniard secured his first MXGP podium of his career in Latvia, going 3-4 for third overall. Now it will be interesting to see if that first podium will change anything for Fernandez and whether he can follow up with more.

Gebben Van Venrooy Yamaha Racing’s Arminas Jasikonis is on the entry list for the Italian Grand Prix and will hopefully make his come back after missing the last four GPs. Looking at the current entry list, Beta SDM Corse’s Alessandro Lupino will also return to racing

Making a wildcard appearance for this GP will be David Philippaerts who is a usual regular when it comes to racing the Italian GP’s.

Home rider Alberto Forato of SM Action Racing Team YUASA Battery will be looking to put on his best performance on home soil and continue delivering the strong results that he has been showing so far. He currently sits ninth in the championship standings which is pretty impressive. There are quite a few Italians to watch out for in general this weekend including Fantic Factory Team Maddii’s Nicholas Lapucci and Filippo Zonta among quite a few others who will wildcard this weekend.

In MX2 things are getting interesting at the top of the championship standings as Monster Energy Yamaha Factory Racing’s Jago Geerts took back the red plate in Latvia with a clean 1-1 overall victory, though he remains tied on points with Red Bull KTM Factory Racing’s Tom Vialle. So, it’s back to square one for the pair, as they basically start from zero, which should make for some very interesting racing.

In Latvia, Geerts was on top of his game and keen on making up for lost ground in Trentino where a DNF saw him lose the championship lead. Meanwhile, Vialle struggled to find his rhythm all weekend long in Kegums, so will be looking to bring his A game this weekend and take maximum points. Last year the MXGP of Italy was not the best for Vialle, who after getting injured a few weeks prior, only managed a few laps of the races.

What would be nice to see this weekend is something special from Red Bull GasGas Factory Racing’s Mattia Guadagnini. Last season, Guadagnini had a dream weekend in Maggiora, winning a race and then subsequently winning the GP (his very first one and on home soil) as well as taking the red plate! Of course, expectations are going to be high this weekend, as the Italian is yet to finish on the podium this year and this weekend could be his best opportunity to do it.

The second Red Bull GasGas Factory Racing rider Simon Längenfelder is currently third in the championship, sitting on the same points as Nestaan Husqvarna Factory Racing’s Kay de Wolf and Big Van World MTX Kawasaki’s Mikkel Haarup. Since his podium in Great Britain, Längenfelder has come close to the podium, but consistency its what’s letting him down lately. Meanwhile, de Wolf has also had some very solid results this year, he’s been on the podium twice but has also had a couple of races, where consistency was the reason why he narrowly missed out on a spot on the box. Either way both Längenfelder and de Wolf are still a pair to watch out for this weekend.

Meanwhile Haarup had a tough weekend in Latvia after an unavoidable crash, on a landing of a jump where another rider had already fallen, took him out of the running for his fourth consecutive podium. Before that, Haarup was running well and had presented himself as a real threat at the sharp end, so hopefully he can bounce back this weekend and see the beginning of another podium streak.

F&H Kawasaki Racing’s Kevin Horgmo had a near perfect weekend in Kegums and continued the team’s success in Latvia, securing his first podium in MX2 with second overall. Horgmo led an impressive 11 laps of the second race, before getting caught by Geerts, nonetheless, the Norwegian showed that he is fast enough, fit enough and most importantly confident enough to lead races which is a huge confidence boost in itself. It will be interesting to see what the next race has in store and whether the result in Kegums will be like a springboard for Horgmo for the rest of the season.

The Italian GP this weekend will also be a home round for SM Action Racing Team YUASA Battery’s Andrea Adamo. Since his podium in Mantova, Adamo has struggled to put together two consistent results. Also not scoring points in race two at the MXGP of Trentino didn’t help his overall standings as he currently sits in 8th behind Guadagnini. A home GP is usually special for any rider, so hopefully that extra boost of motivation to perform well on home soil will see Adamo fighting with the leaders once again.

Gianluca Facchetti of Team Beddini Racing KTM is also on the entry list, along with another local rider Daniel Gimm who will make a wildcard appearance this weekend.