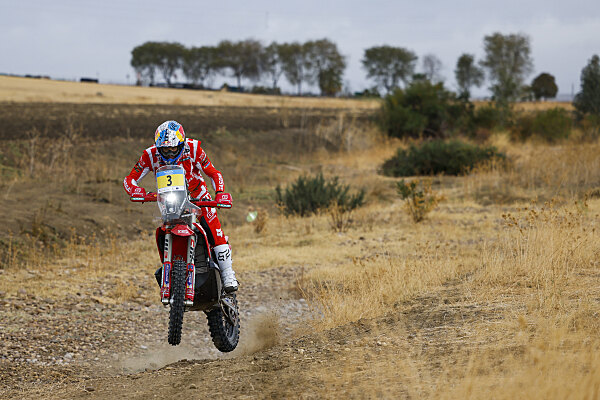 CALCULATED RIDE FROM SAM SUNDERLAND ON PENULTIMATE STAGE OF THE ANDALUCIA RALLY.

Back to full-throttle rally-racing action today following yesterday’s unfortunate stage cancellation, GASGAS Factory Racing’s Sam Sunderland has safely completed the penultimate special of the Andalucia Rally with the 11th fastest time. Now, with just one stage remaining, the Brit is on the cusp of claiming the 2022 FIM World Rally-Raid Championship and Dakar Rally titles in the very same season!

Sam Sunderland:“It was great to be back out there racing today although with the early morning fog we had we were all a bit worried about another cancellation. But it soon burned off and then it was go time. It was a long day today. I was on my own all day and I did have a couple of scary moments out there, so I slowed things down a little. There’s a lot more to lose than gain here so I settled down and rode with a little more patience. But now we have one day to go and we’re in a really good place to get the championship done.”

As the second rider to enter the penultimate stage after his impressive runner-up finish on stage one in Spain, Sam was on the gas through the early part of today’s 333-kilometer special. But after a couple of close calls, and knowing the enormity of what’s at stake, Sunderland wisely backed off the throttle just a touch to complete the longest timed stage safe and sound and ready for the final day of racing.

All that now lies between Sam and lifting the 2022 FIM World Rally-Raid Championship trophy is one more special stage. At just 100 kilometers, it sounds like it’ll be a sprint to the finish, but with all the changeable terrain and weather Sam’s experienced this week, it’ll be anything but simple.