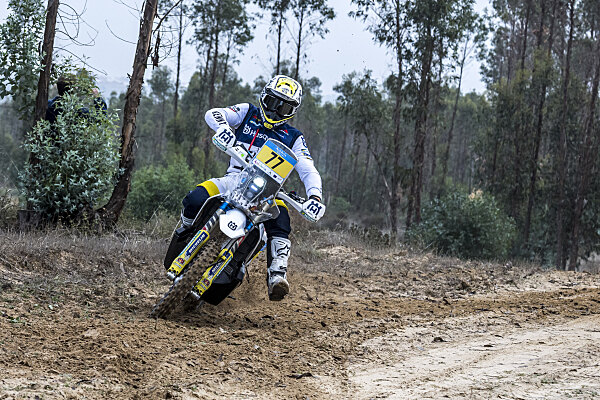 Luciano Benavides has put in a solid ride on the long stage three of the Andalucia Rally to place third overall. Despite a crash in the second half of the timed special, the Husqvarna Factory Racing rider was able to complete the day inside the top three, finishing just over three minutes down on the winner.

The longest stage of the event started well for Benavides. After a short delay due to the weather, the FR 450 Rally rider was the third competitor to enter the 284-kilometre timed special and immediately delivered a pace that secured his position inside the top three. Feeling comfortable, despite the unpredictable and slippery tracks that made up the first half of the stage, Luciano reached the refuelling point as third fastest.

Setting off again and looking to improve his position, a small crash resulted in the young Argentinian losing several minutes to his rivals. Thankfully, despite being in some discomfort, Benavides was able to safely complete the stage in an excellent third place.

With one day of the event left to contest, Luciano lies third overall, just over five minutes down on the provisional leader. Sunday’s 400-kilometre stage includes a short 100-kilometre timed special, where Benavides will be aiming to give his all in the hope of securing himself a podium finish.

Luciano Benavides:“It was a really, really long day again – more than three hours on the bike and tough, slippery tracks where you are sliding around all the time. Navigation was quite easy, but you had to take extra care about all the notes in your road book. It wasn’t so easy to get completely lost, but it was possible to miss a turn or another track, and that could cost you quite a few seconds each time. Honestly, in the first half of the stage I thought I was doing well. Times were tight but I was holding on to about third place, around 30 seconds down. Then, after the refuelling, I had a crash which cost me a few minutes. I was in a little pain but carried on ok. Towards the end, my brother caught me, so it was cool to finish the stage going full gas on the sand with him. I’m happy with my pace on the whole and looking forward to the finish tomorrow.”