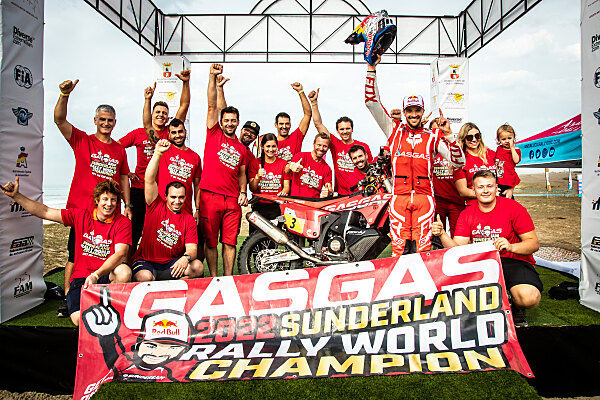 What a year! Starting in January with a stunning victory at the Dakar Rally, GASGAS Factory Racing’s Sam Sunderland has today become the 2022 FIM World Rally-Raid Champion! Doing the double is an incredible achievement, and thanks to Sam and the whole team, they have delivered the first world title for GASGAS in rally competition.

Sam Sunderland:“Amazing! It’s been a crazy year with the Dakar win and then winning in Abu Dhabi, but then we had a big gap over the summer. We were back in action for the last round in Morocco but that one was tough as I hurt my wrist in a crash before we even started. But with the championship on the line, I had no choice but to push through it and my result there really made things easier for the final round. I had a couple of close calls yesterday and after that, and knowing that getting on the overall podium would be almost impossible, I kept things super steady. I’m really grateful to have the GASGAS Factory Racing team behind me, it’s been an amazing year, and I know we’re all looking forward to celebrating this one!”

As racing seasons go, it couldn’t really have gone much better for Sam Sunderland. Kicking off 2022 by winning the biggest race of them all, the Dakar Rally, there was no better way to start the year. And with his stunning victory, Sam took an early lead in the 2022 FIM World Rally-Raid Championship.

Round two, the Abu Dhabi Desert Challenge, was up next and the GASGAS Factory Racing star’s winning ways continued. Riding a faultless race and still stoked on his Dakar win, the Brit claimed his second victory on the bounce to further extend his points lead at the top of the world championship.

After a couple of cancellations and postponements in the racing calendar, Sam didn’t line up for FIM World Rally-Raid Championship duty again until the Rallye du Maroc in early October. In what was perhaps his most crucial result of the season, Sam overcame the discomfort of a pre-race crash to put in a gutsy performance and place fifth overall to maintain his championship lead.

Heading into this year’s final round, the Andalucia Rally, Sam needed just three points to be crowned world champion. But knowing how quick things can change in racing, the Brit left nothing to chance and clocked the fastest time in the Prologue. A runner-up finish on stage one continued his promising start before the second day of racing was cancelled due to bad weather.

A couple of mistakes on the penultimate stage and an unfortunate time penalty ruled out any chance of ending the season with a podium result. But knowing that he just needed to complete the final stage to be crowned champion, Sam did exactly that to lift the 2022 FIM World Rally-Raid Championship trophy surrounded by the entire GASGAS Factory Racing team.